So after Saturday's reintroduction to the worlds favourite pastime I was back to being a happy chappy.  But then, things got even better - I managed to wangle my way onto another ride on Sunday!
Mike and Nev were assaulting Takapari Road on their KTM's and decided that they could make room for Chevvy and I.  Not mad enough to take the Tenere on the ride, this was going to be an outing for the WR and Chevvy thought that Mighty Mouse could do with some moral support so brought his one up too.
After some extensive bike preparation (air added to tyres, oil squirted on chain) I was ready and once Chevvy had arrived and got a coffee inside him, we headed out to Ashhurst for fuel and to meet the KTM boys.
Initially I'd been concerned that we'd hold up the orange bikes on the seal out to Takapari Road but some earlier showers had left the road fairly wet and the WR's were mostly able to keep up with the big bikes.  It is possible that the KTM's were being nice to us...
After some squabbling about who was to go first (sacrificial lamb?), Chevvy had some words of wisdom (not something of a regular occurence):
In the end it was Nev that led off with a mouse following closely behind on the first section of gravel.  After the first gate I was waved through - which meant that I got the next 2 gates...
At the top gate we had a quick photo stop before heading into the rough stuff. 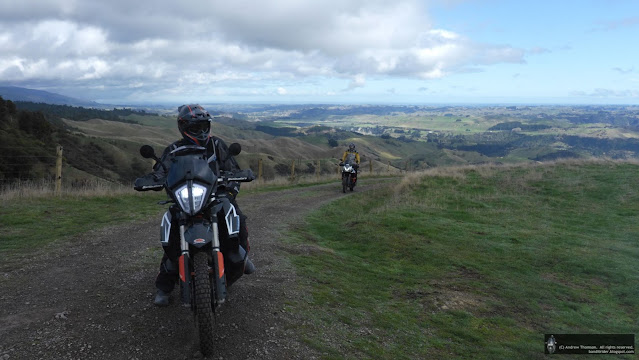 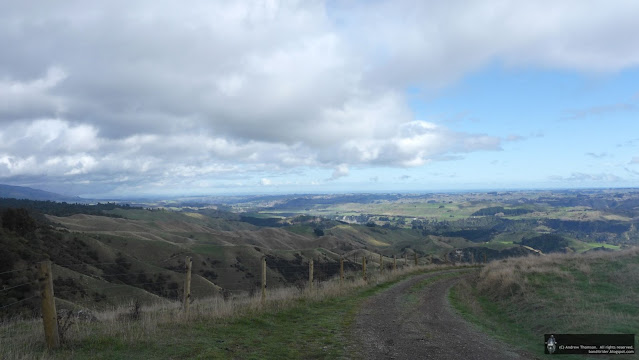 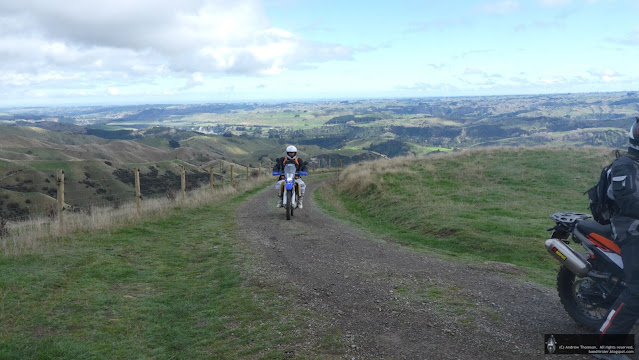 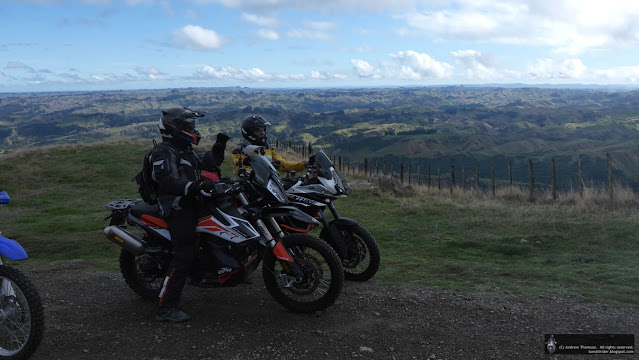 The last gate signals the start of a narrow, rougher and rocky track with plenty of obstacles to pick you way through - basically fun city on a little bike.
I headed off last after shutting the gate and pretty much straight away ran up the back of Chevvy at the bottom of a climb.  You'll see it on the video, but basically he looked like he was heading off after waiting for Nev, I took my eyes off him as I thought I spotted Nev in trouble climbing up the hill, Chevvy stopped, I braked hard, slid into him and dropped the WR.  All my fault with no harm done to bikes or bodies but a little silly all the same.  Embarrassingly it is on the video...
Having picked the bike up I chased after the KTM's and caught up with them further up the hill.  After a quick regroup they sent me on my way (probably so I didn't crash into them I guess) and I hammered my way up the hill.  At the top of one of the steeper rock climbs I stopped in the fog to nab a few pics.
Still climbing higher, there was the odd spit of rain and the mist became a bit more fog-like - it even limited my top speed...
Soon the A-frame hut loomed out of the gloom and I had to slam on the brakes as I overshot it.  The lads were not far behind and we had a decent breather and a yak while checking out the hut. 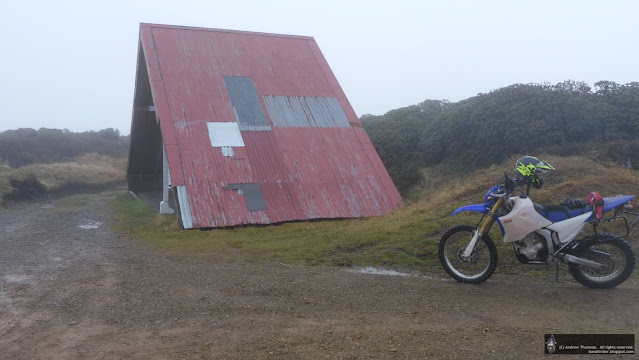 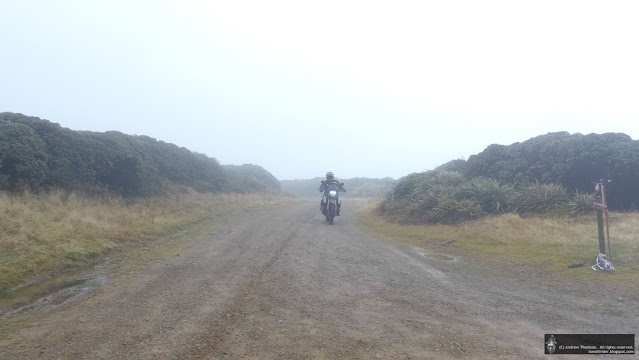 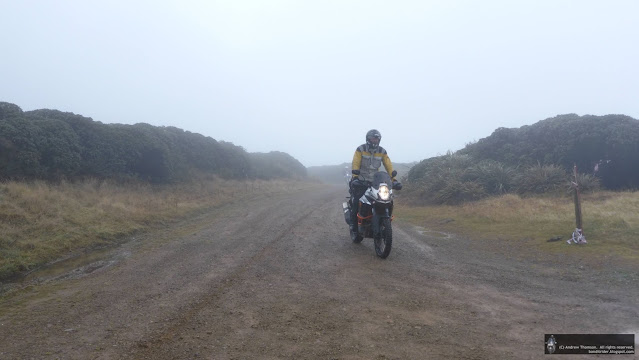 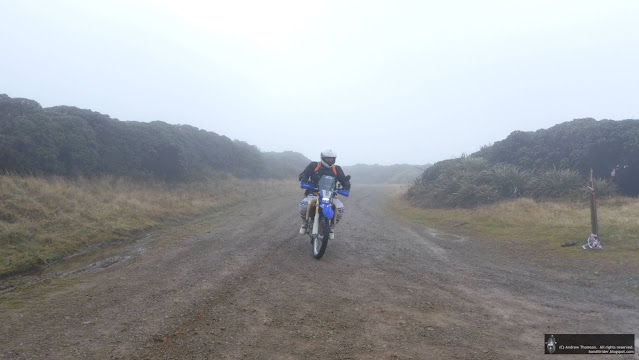 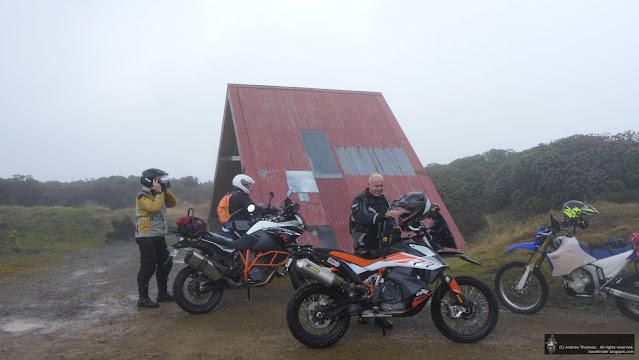 After much chin-wagging it was time for the descent through the murk.  Once again everyone was keen for me to go first and keep out of their way.  It gave me the chance to catch them ploughing through one of the larger puddles.

Leaving Nev to enjoy the fog I shot off again and spent some time filming both Mike and Chevvy as they picked their way down through some of the snotty stuff.  Unfortunately, by this time the camera was covered in muck and the video is pretty average.
Back at the bottom gate, I opened it so the WR's could park and turned around to see this: 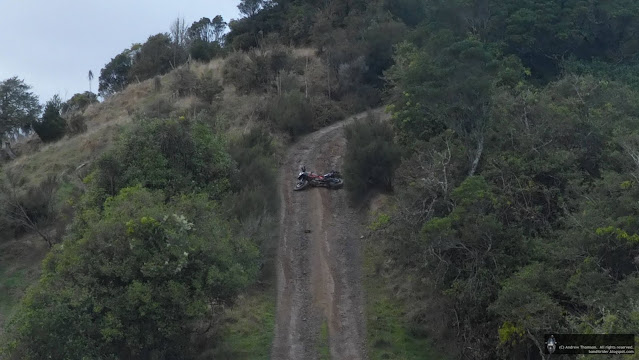 Poor ole Mike had got his big bike down through some of the worst of the gnarly stuff only to be caught out on the last slippery decent.  He quickly got the bike vertical again and luckily it wasn't damaged too bad and Mike didn't get hurt.
Once we'd commiserated with Mike, we carried on down the hill, getting stuck behind a Hilux that didn't want to pull over, and parked at the bottom to sort out our next steps. 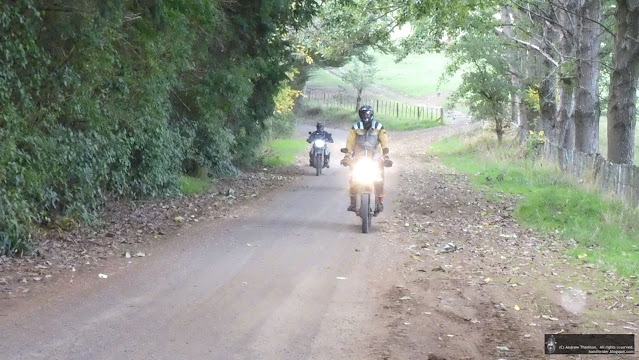 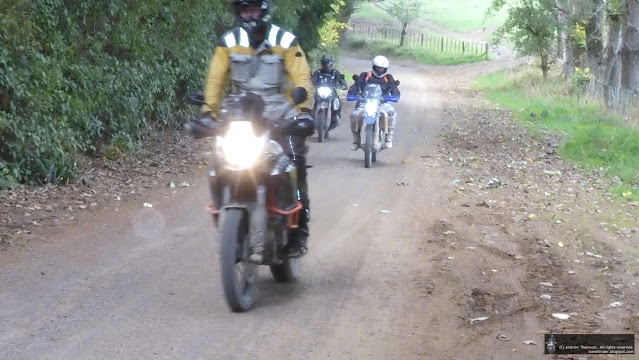 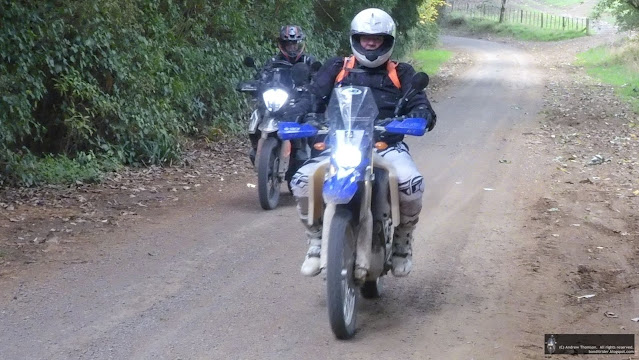 Oh, and here's the video of the ascent:
At the bottom of the hill, the KTM boys decided to make tracks while Chevvy and I decided that we still hadn't had enough fun.
While Mike and Nev turned left, we went right, further up the valley before turning onto Makoura Road and man was that a good idea!  The gravel was superb and the WR's flew across it.  At an intersection I stopped and told Chevvy that I needed to just nip home and pick up the Tenere to ride it again...
Down at the bridge, having survived an oncoming truck, we pulled off the road and picnicked beside the river.  How civilised...

Lunch taken care of, I had to introduce Chevvy to Ridge Road and while it may not have been quite as nice as Makoura Road, the gravel was still pretty good and it was a really neat ride across the ridges. 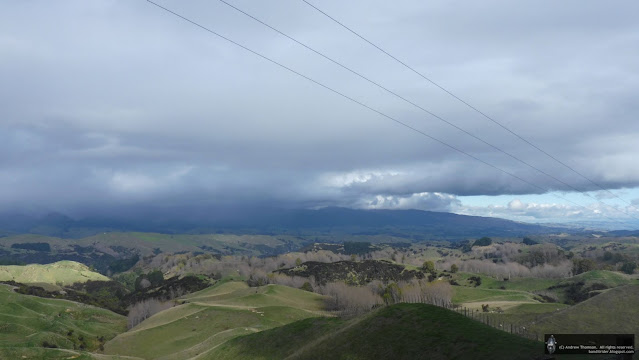 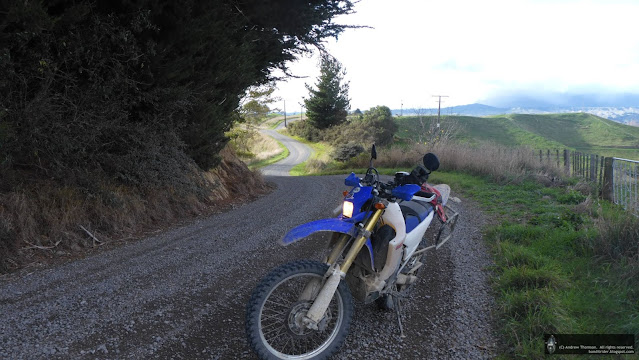 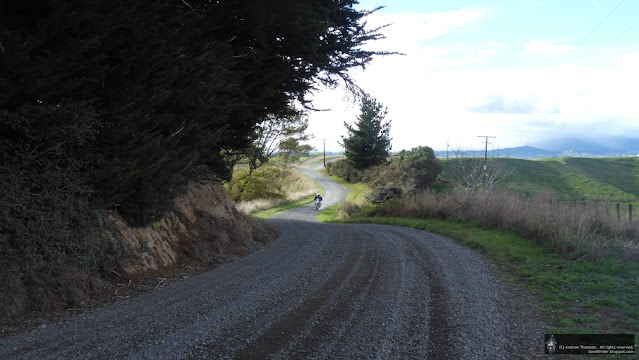 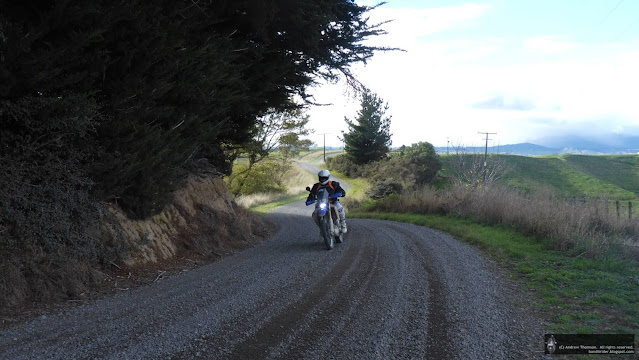 Then Zig Zag Road got us out onto Valley Road. 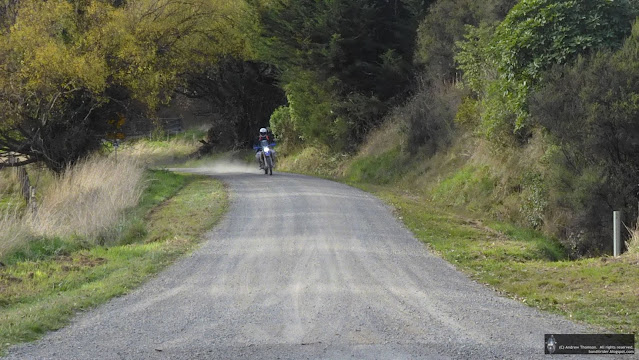 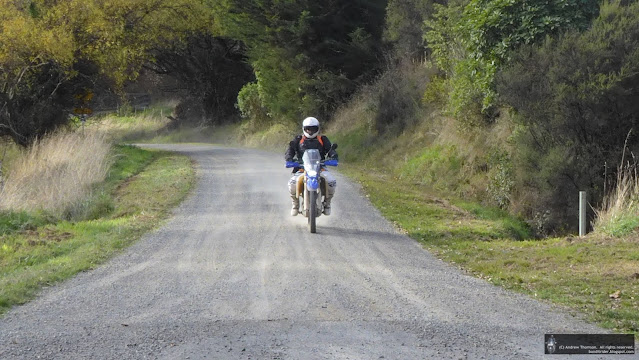 One last section of gravel on Watershed Road spat us out onto the seal for the ride back into Palmy where I said goodbye to Chevvy and he made his way home to the Hutt.  A big day out on the little bike for him - I did about 180km and he would have done 3 times that by the time he got home...I sense a NI1600 in his future...
So, two days of freedom used up in the most appropriate way.  What a great weekend!
Posted by Andrew Thomson at 7:14 pm