Now where were we?  Oh, lunch, yes, one of the three most important meals of the day...

After the hordes were fed those that were continuing on the afternoon ride went to gas up for the ride up the Wanganui River Road.  The collection of various adventure bikes were even joined by a couple of road bikes (a Suzy Gladius and a Husky Nuda) keen for the ride up the river (including the wee bit of gravel).

Turning off SH4 we were onto the lovely winding but narrow river road which as the name suggests follows the Wanganui River North to Raetihi.

The first wee climb up the hill was pretty slippery as it probably doesn't see the sun too much during winter but once we popped out on the other side there was only the odd damp corner to look out for. 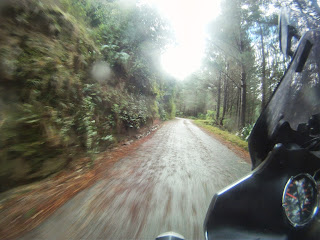 We took things pretty leisurely and took time out to stop a few times to check out the views and wait for everyone to catch up. 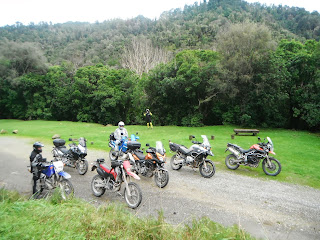 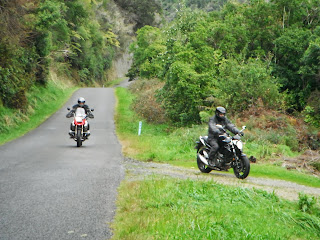 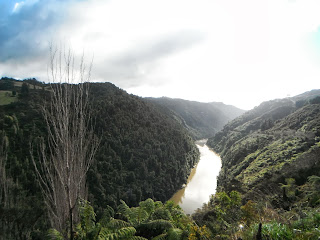 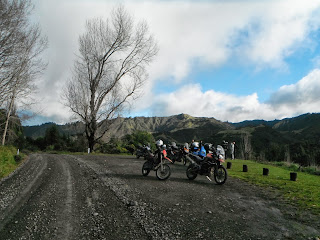 The gravel was in pretty good nick so our two road bike riders didn't have any trouble but apparently a GS had a few issues and they went back to assist - I hope everyone got home alright and that the bike is ok.

Arriving in Raetihi I had my own wee mechanical issue.  While parking I discovered that I could not get full left lock outta the Vee.  After much hunting around I discovered the culprit - one of the bolts holding the little subframe that carries the front fairing, headlights etc had worked it's way loose and got wedged between the frame and the steering stop on the lower triple tree.  The other bolt above it was also loose...I've no idea how the bolt fell out and didn't just disappear never to be seen again...But after a bit of spannering I was good to go again. 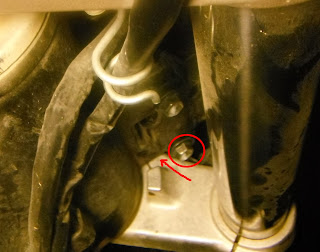 From Raetihi Neil led us off in the direction of the Paraparas but we turned off onto Oruakukuru Road which quickly went to gravel but offered some great riding and scenery. 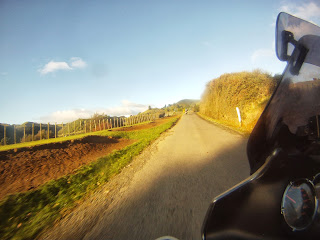 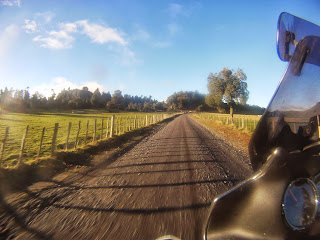 When we hit Fields Track Neil departed for home and I led the rest of our group down Fields Track before turning off to take in Whangaehu Valley and Mangamahu Roads South back towards Wanganui.

There's a fair bit of good gravel through here but after all the rough weather we've been having there were quite a few slips down on the road and we had to watch out for the odd rock in our paths. 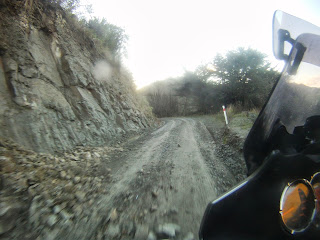 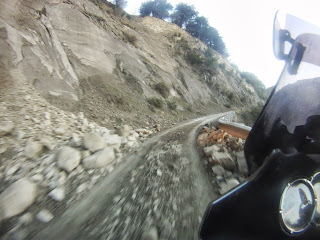 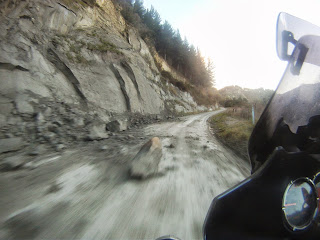 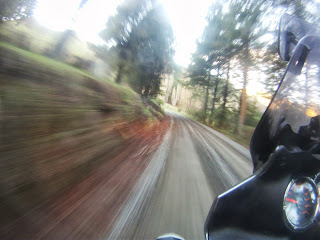 It was a great ride down along the river but by the time we got through to Fordell and waved off the two bikes heading into Wanganui it was about 5pm and definitely starting to cool off.  Barry and I didn't muck around too much and it was quite nice to get home just before 6 and arc up the fire after a superb day's riding.