Well, where to start?  If you caught the little trailer the other day you'll probably know that I went on a little adventure on Sunday.  "Little" - yeah, right!

This wee map may give a bit more of an idea on just what sort of an adventure it was: 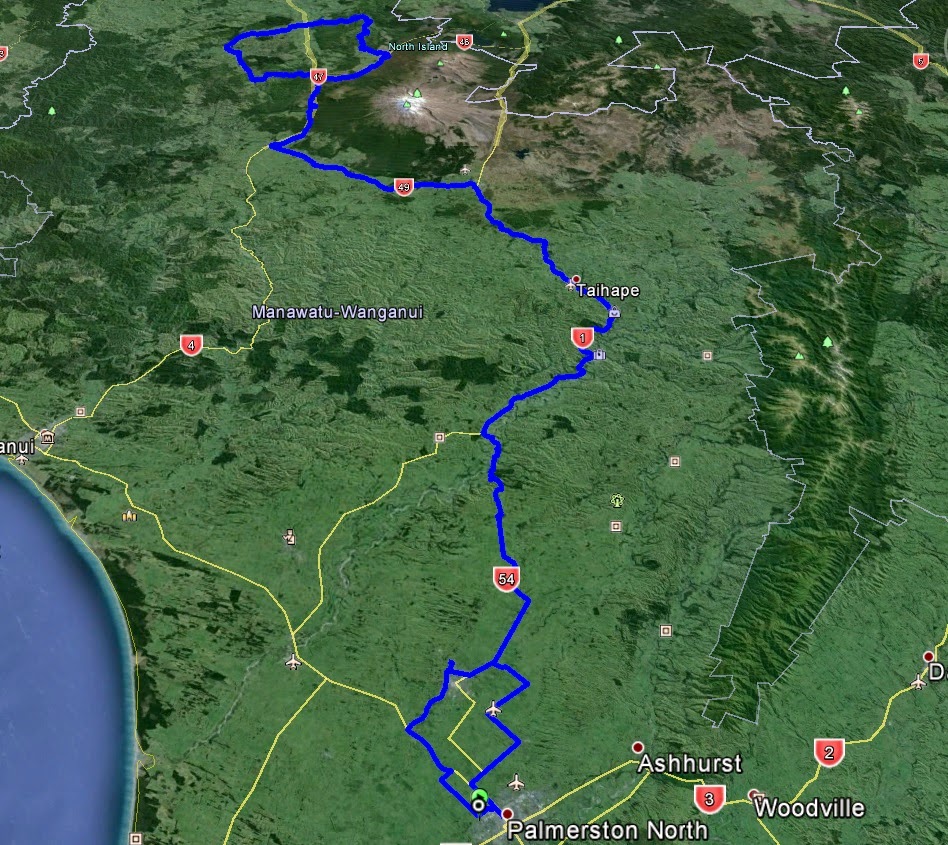 The straight crooked line from Palmy to National Park is the route up to the ride and back.  It's roughly 200km each way and Colin and I (with Steve on the way up) did it in about 2 hours.  So times two gives 400km and about 4 hours riding.

The little loop at the top is the adventure bit of the ride.  It was around 120km all up and including our lunch break took us about 5 and half hours...

So there's probably a fair bit of excitement built into that 5 and half hours eh?  Best start at the start then.

I met up with Colin F and Steve in town just after 7am.  We waited around a little while to see if there were any other Palmy riders coming to join us but then bugged out at about 7:20 after nobody else showed up.

The ride up to National Park was quite nice.  It was a bit chilly going over Vinegar Hill but it was neat looking out over the valley at the fog that was settled in the valley below us - I probably should have stopped for some pics but hey, we were on a mission.  On SH1 we got to ride in some of that fog too...

We had a couple of little scares with the HP (Colin was looking forward to his coffee in National Park I 'spose) but managed to all get to National Park in one piece - even picking up another KTM along the way.

In National Park we gassed up and picked up a few more of the gang before finding the cafe where we meeting.  Neil and a few others were there already enjoying a late brekkie (I was surprised to see that Neil hadn't requested extra lashings of whipped cream on his eggs benedict - he must be on a diet) in the sunshine.  We had no option but to park up and join them... 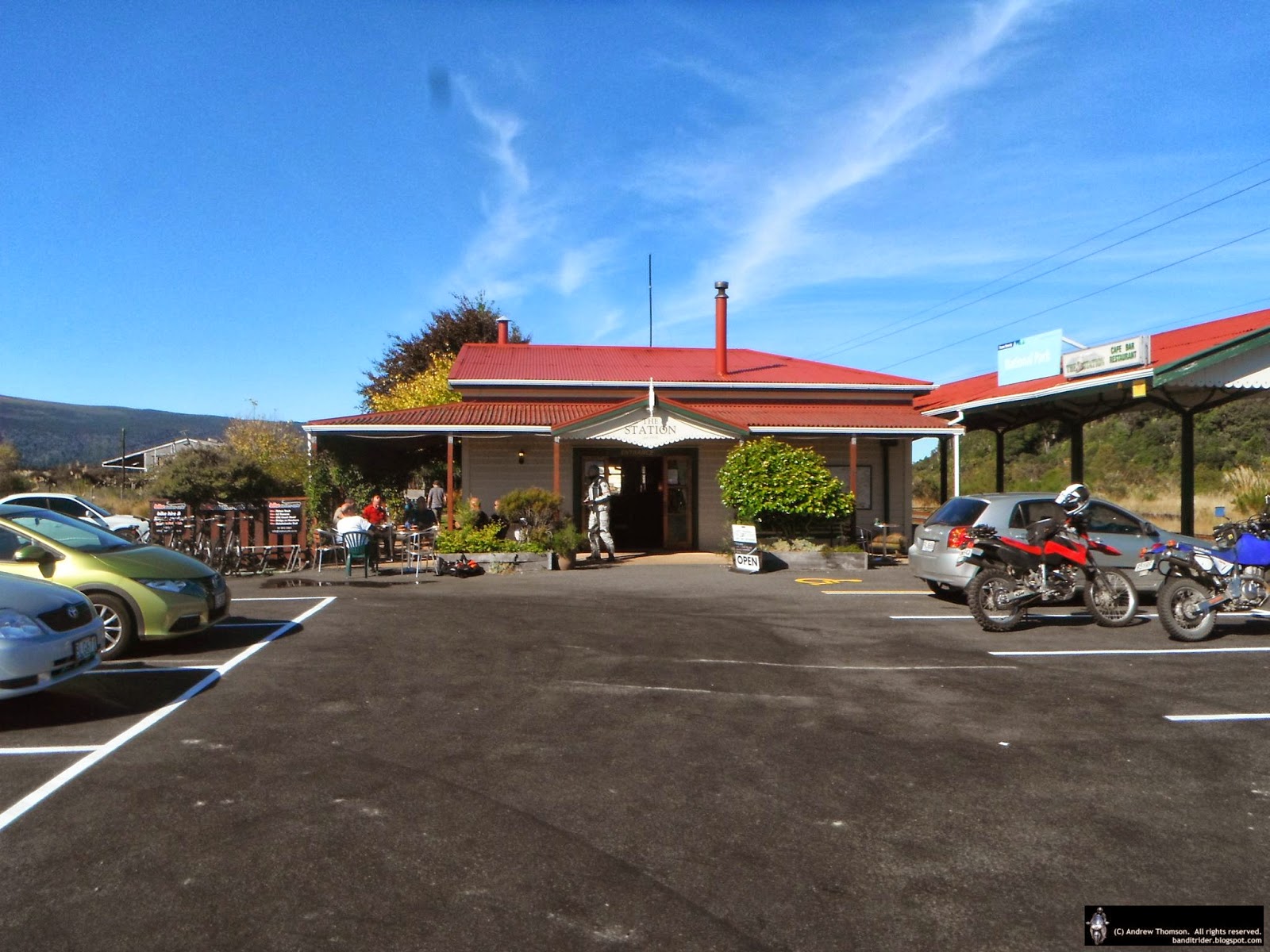 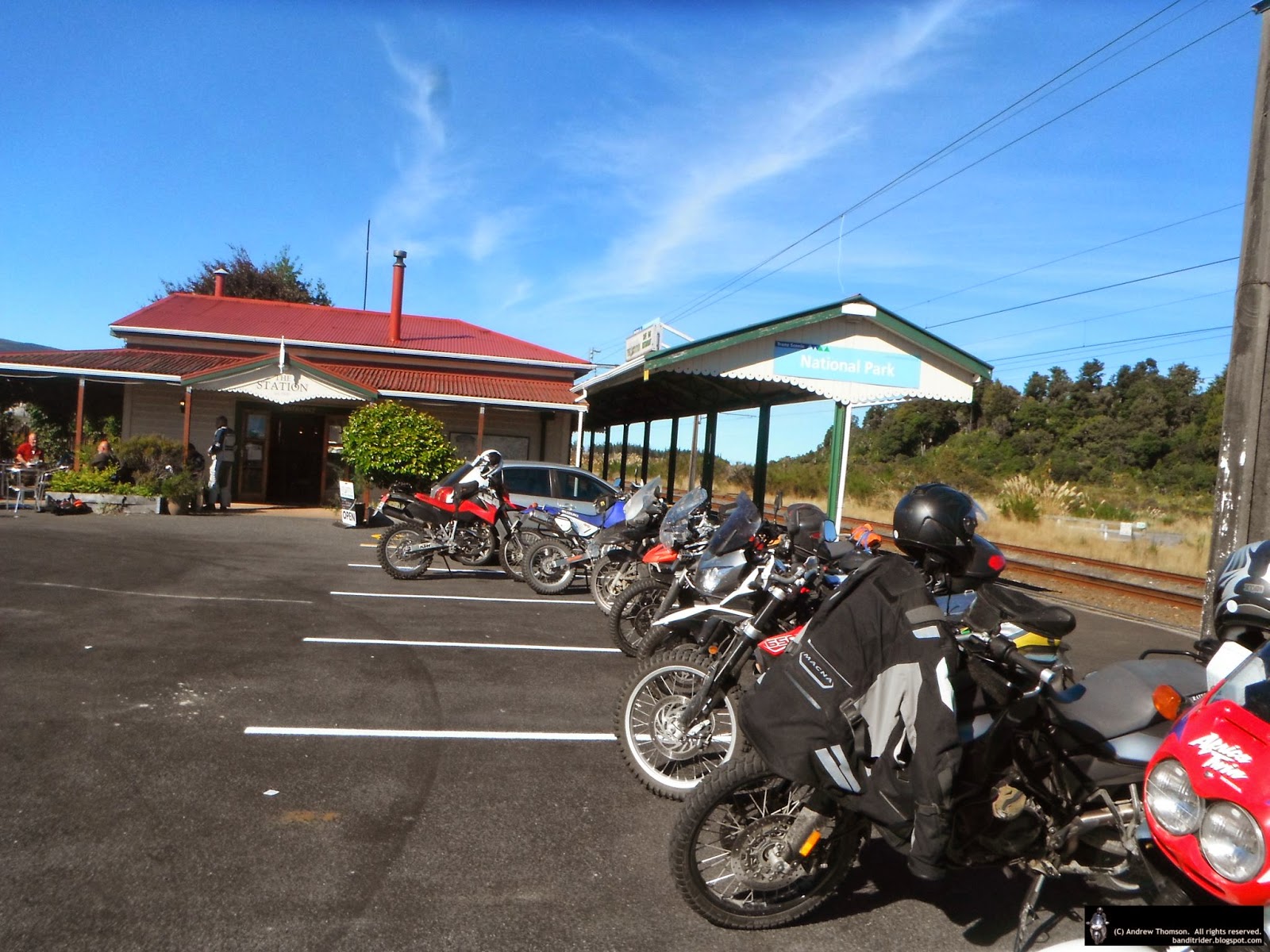 Coffees sunk, we all headed for the bikes and Neil gave us a quick ride briefing.  Word was it was going to be a warm one so most of us removed a few layers of gear (I was stuck with my liners in both my jacket and trou) and then fired up our horses.

Neil led us on up the road and within a minute we were onto the start of Fisher's track.  The "track" started off as a reasonably narrow little gravel road climbing up a hill - mainly 2nd gear stuff with the occasionally foray into third.


As you can see from the video things started getting a little tighter as the track took us across farmland and in and out of the odd bit of scrub.  Third gear ended up being forgotten about - along with the other remaining 3 gears...

Along the way there were a few gates that slowed things down and gave us a chance to regroup a bit to see how things were going for everyone.  It was definitely a nice day for it! 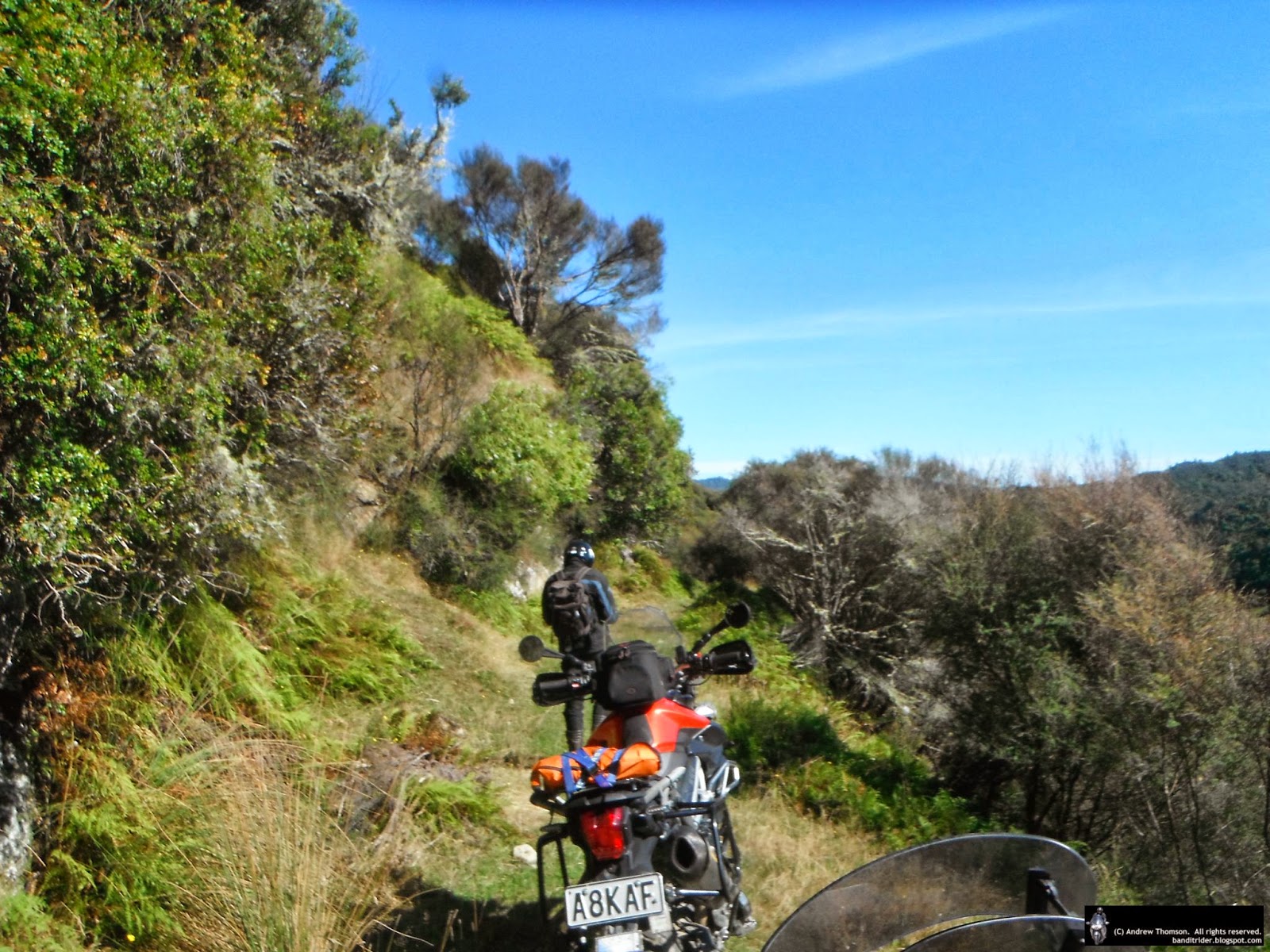 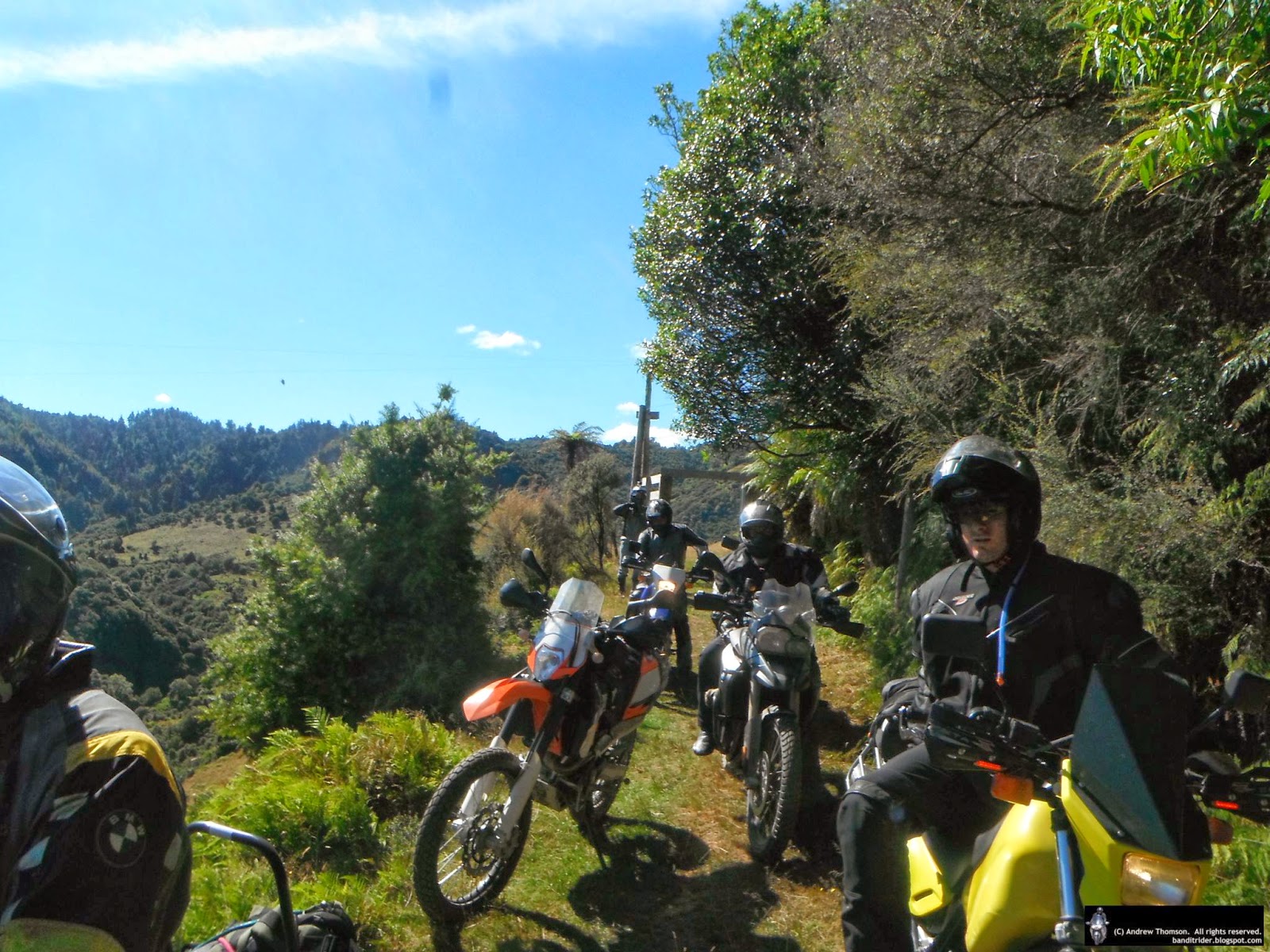 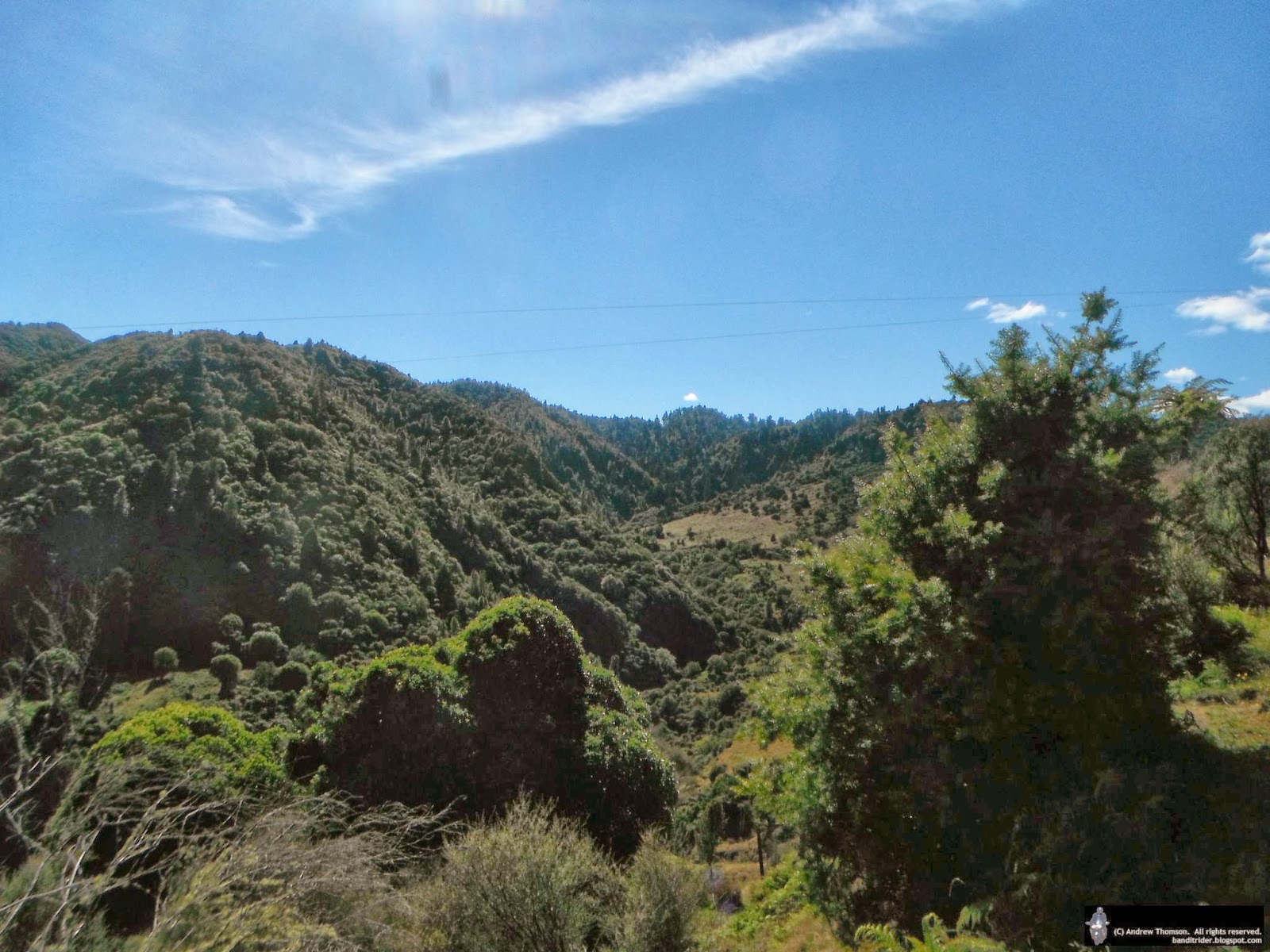 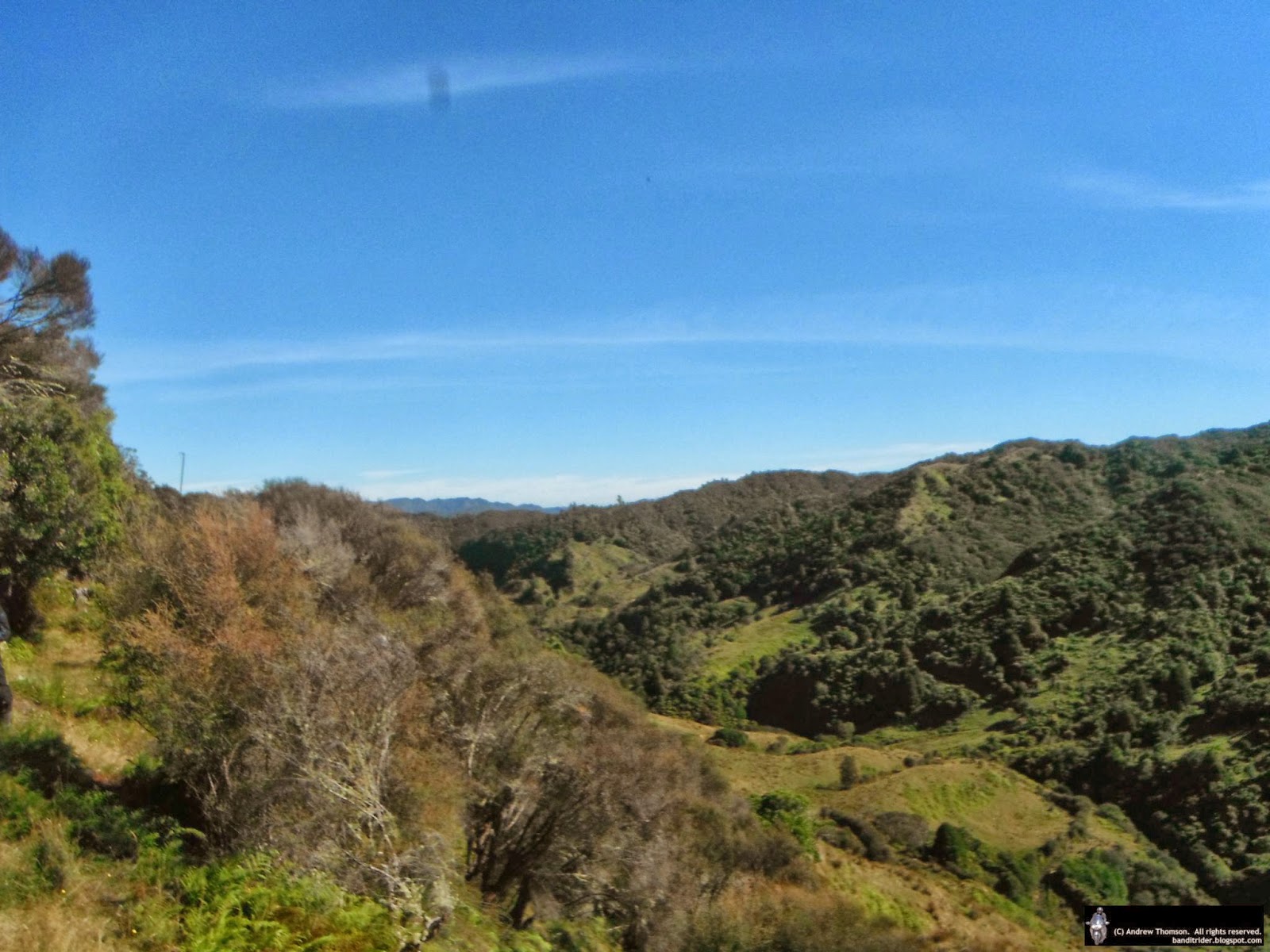 Missing from some of my videos (usual GoPro issues) are the odd little mud hole and soft patch.  The Vee seemed to take these on ok - a combination of good rubber and a light throttle hand seemed to see me through.  But a few others had the odd issue.  A couple on a Wee-Strom had an off in one soft bit and unfortunately broke their clutch lever.  Luckily a little kiwi ingenuity (a piece of webbing from a pack I think and some cable ties) managed to sort it out and we got them going again.  You can see them in action on the video below.


Towards the end of that video you can see me approaching a wee junction with a puzzled Wayne waiting: 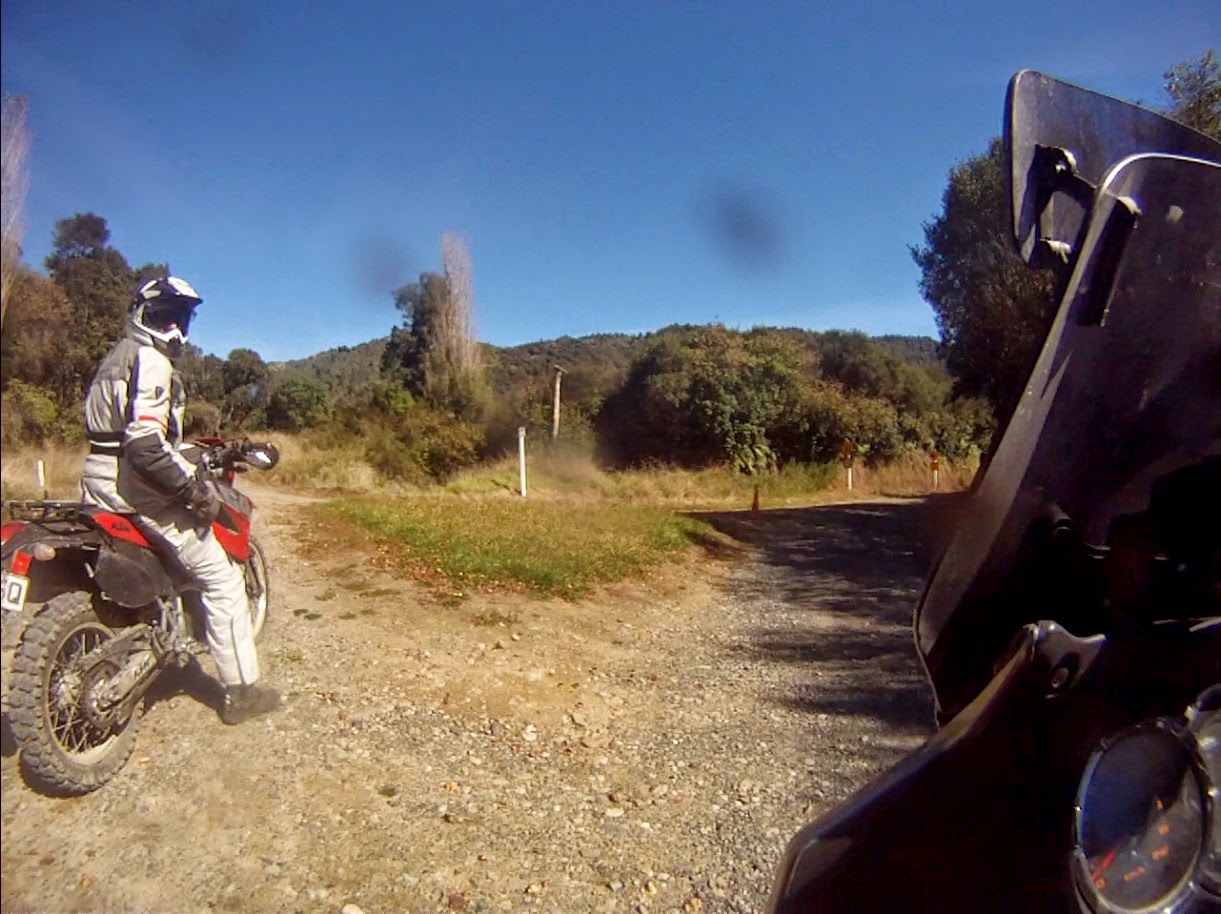 What had happened was our famous "corner-man"system had broken down and there wasn't a rider waiting there to show us which way to go.  In the end we looked around and spotted some likely looking skid marks in the gravel and took the right turn onto Upper Retaruke Road.  I had great fun chasing after Colin F.


At the end of this section we were finally reunited with the rest of the gang and one newbie and would-be corner-man got a little bit of stick from us stragglers. 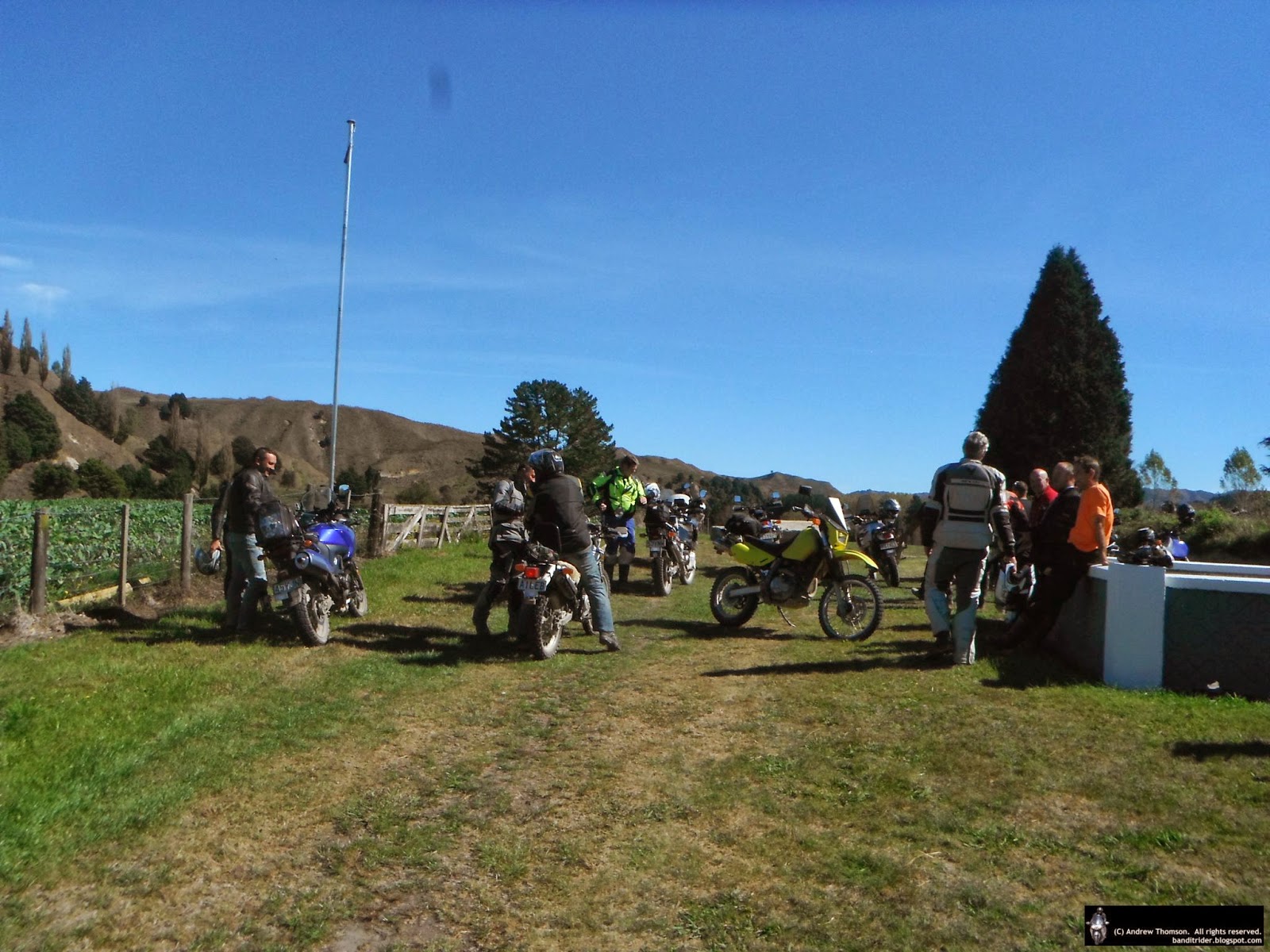 From here we had a short section of sealed road before we could take in one last great bit of gravel before lunch.  This next section was Kawautahi Road and I thought that it seemed a little familiar and was right.  We had done this a while ago on our King Country tour - only in the other direction.  It was a fantastic and fast bit of gravel that the DL seemed to enjoy very muchly - I thought it was pretty damn fantastic too...


This great bit of gravel eventually had to end and it spat us out on the road practically right on top of a cafe which was quickly swarmed with a bunch of hot, dusty and sweaty riders. 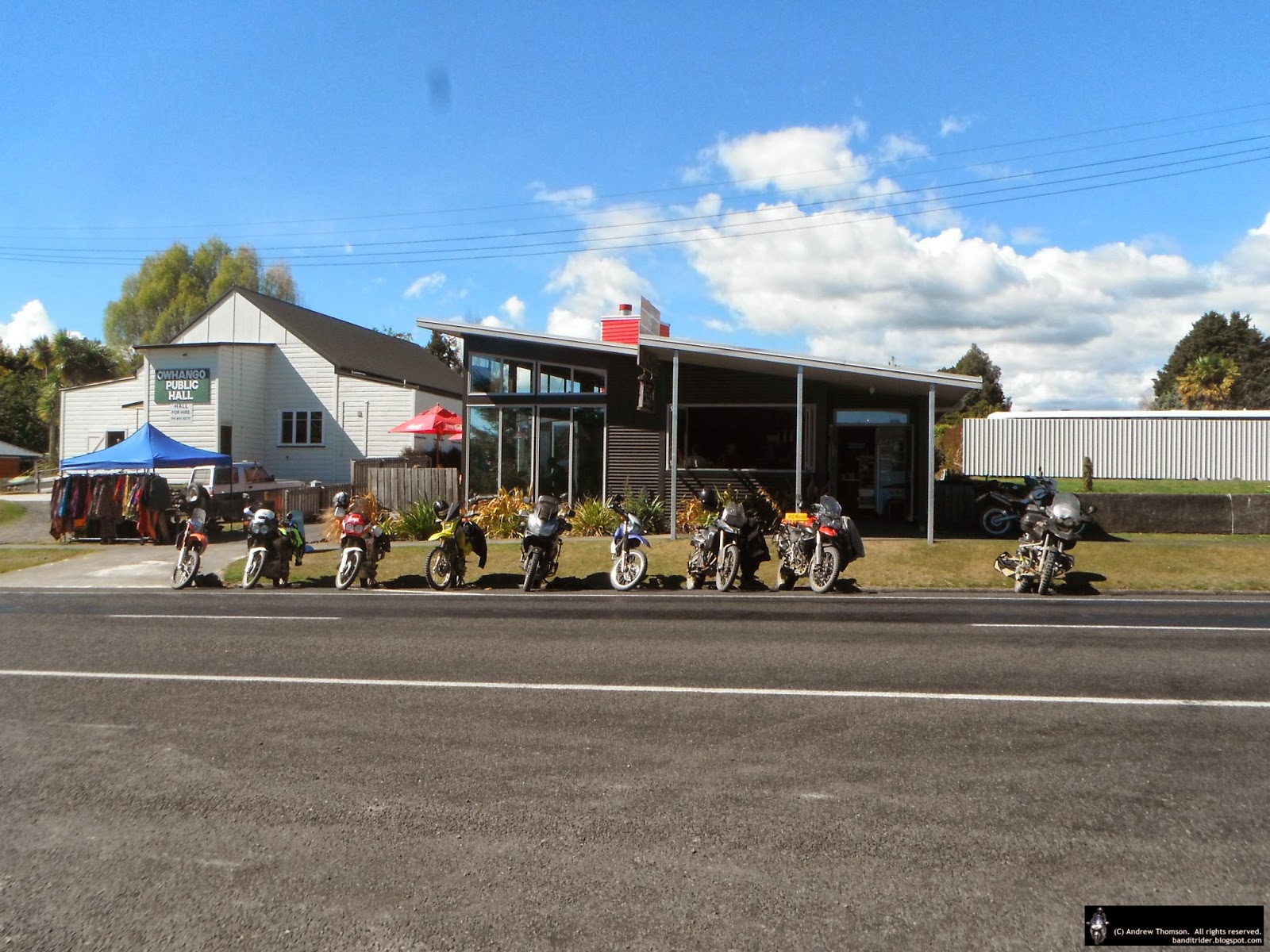 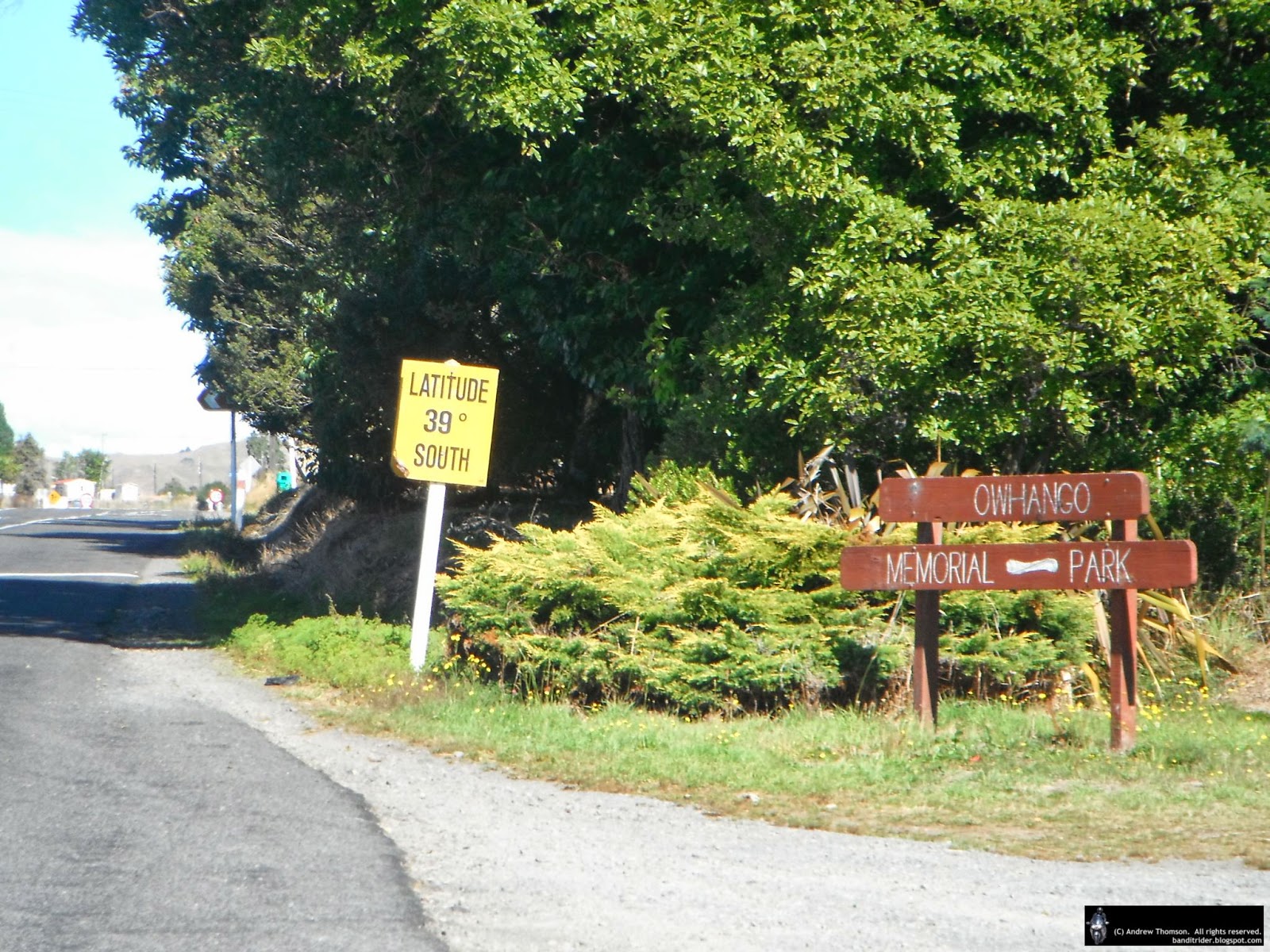 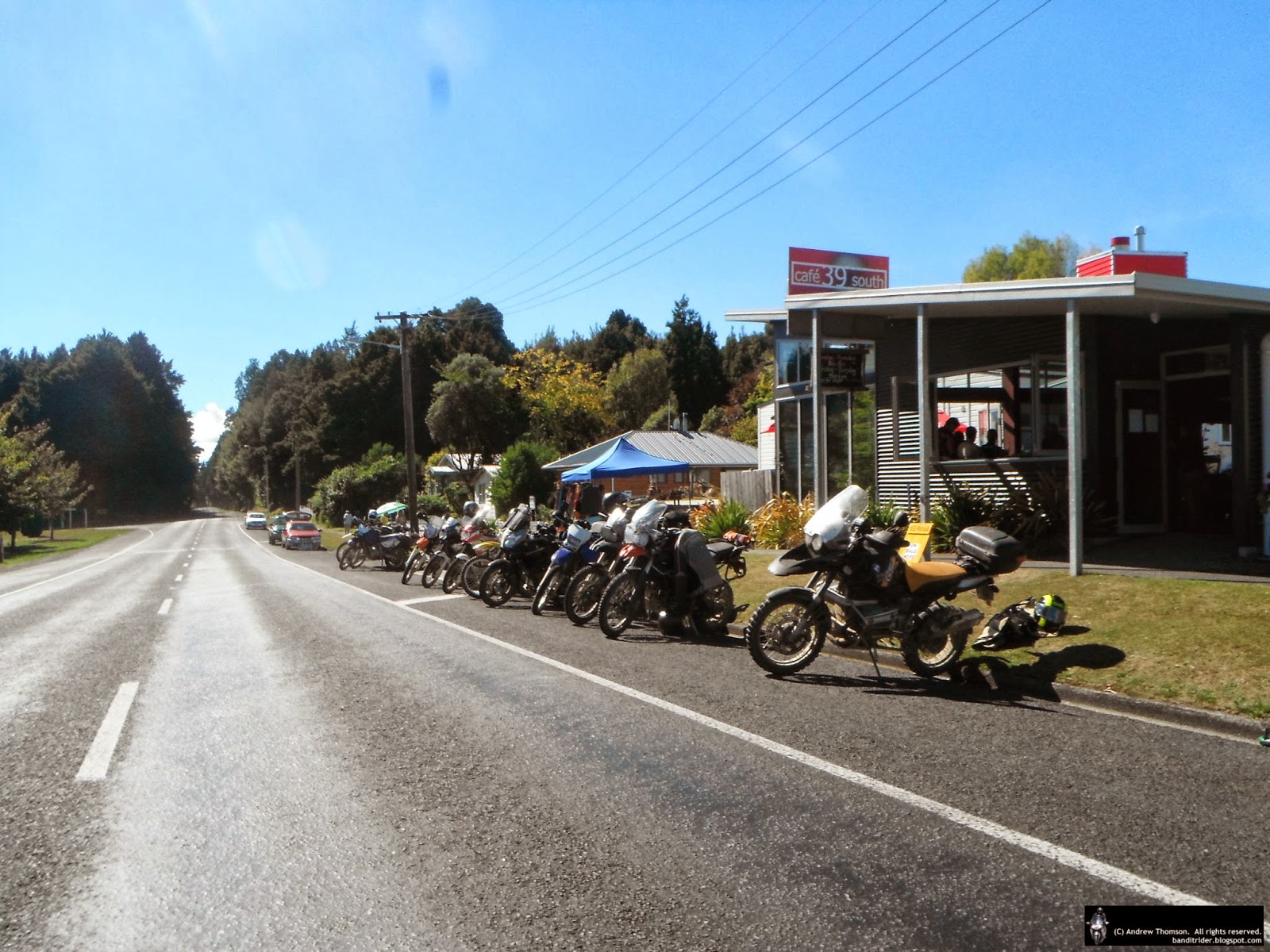 Lunch and cold drinks were quickly ordered and there was plenty of chat about a great morning's ride with everyone really looking forward to the main event after lunch...as it turned out those few gnarly sections of Fisher's Track were just a warm-up...