So, our warm-up and lunch break taken care of, it was now for the main event - the 42nd Traverse. 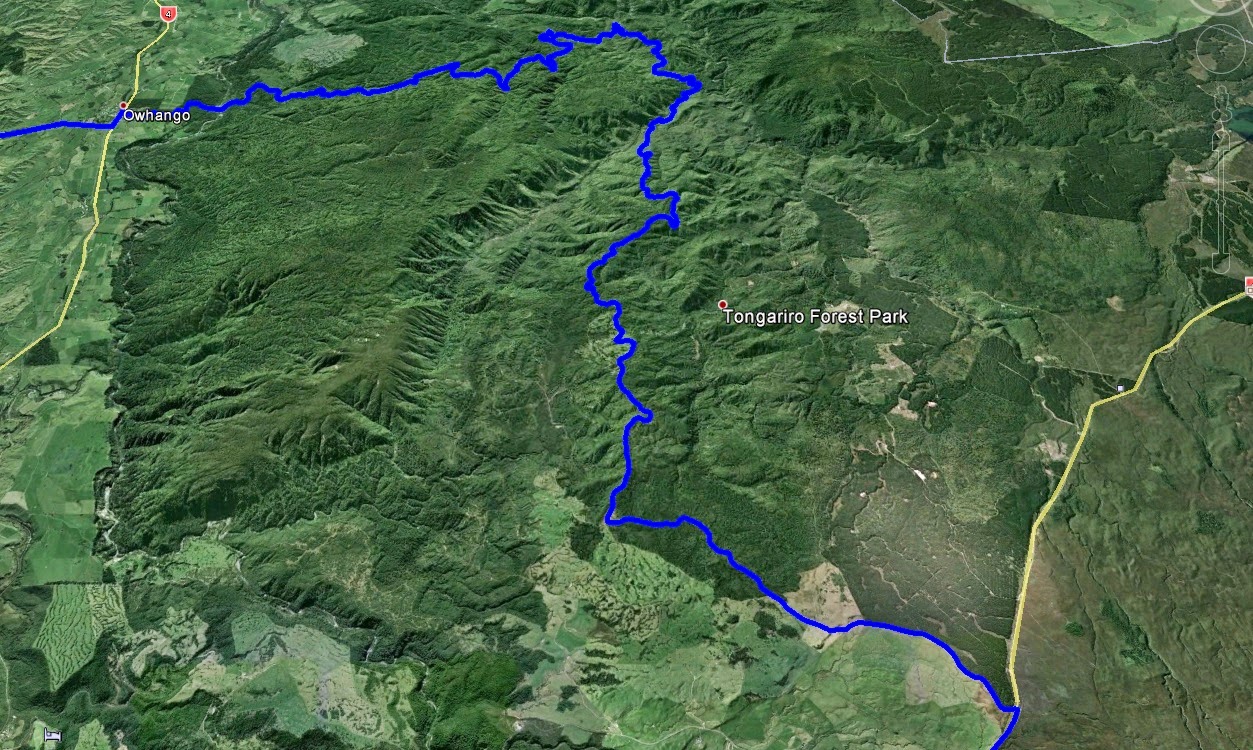 The 42nd has a bit of a name for itself and from what I'd heard I knew that it was going to be "interesting".  If you check out this link on the Adventure Riding NZ website there is a fairly good description of it and it also mentions that the best way to tackle it is:

Well, that'd just be too easy...we were going in the opposite direction...

The odd bit of brush hitting you is not too much of an issue but in a few places the "brush" was blackberry that had been sprayed but not chopped back off the track - a wide berth was needed.

The terrain was mostly dry but as you can see from the videos quite rocky and bumpy - third gear was definitely not going to be needed for sometime.  There were also a few sections where the surface was was wet clay with the odd decent puddle so I trod pretty carefully through these.


It was fairly hot work manoeuvring the bike over and around some of the obstacles so it was nice to stop in the shade for a quick spell and a drink. 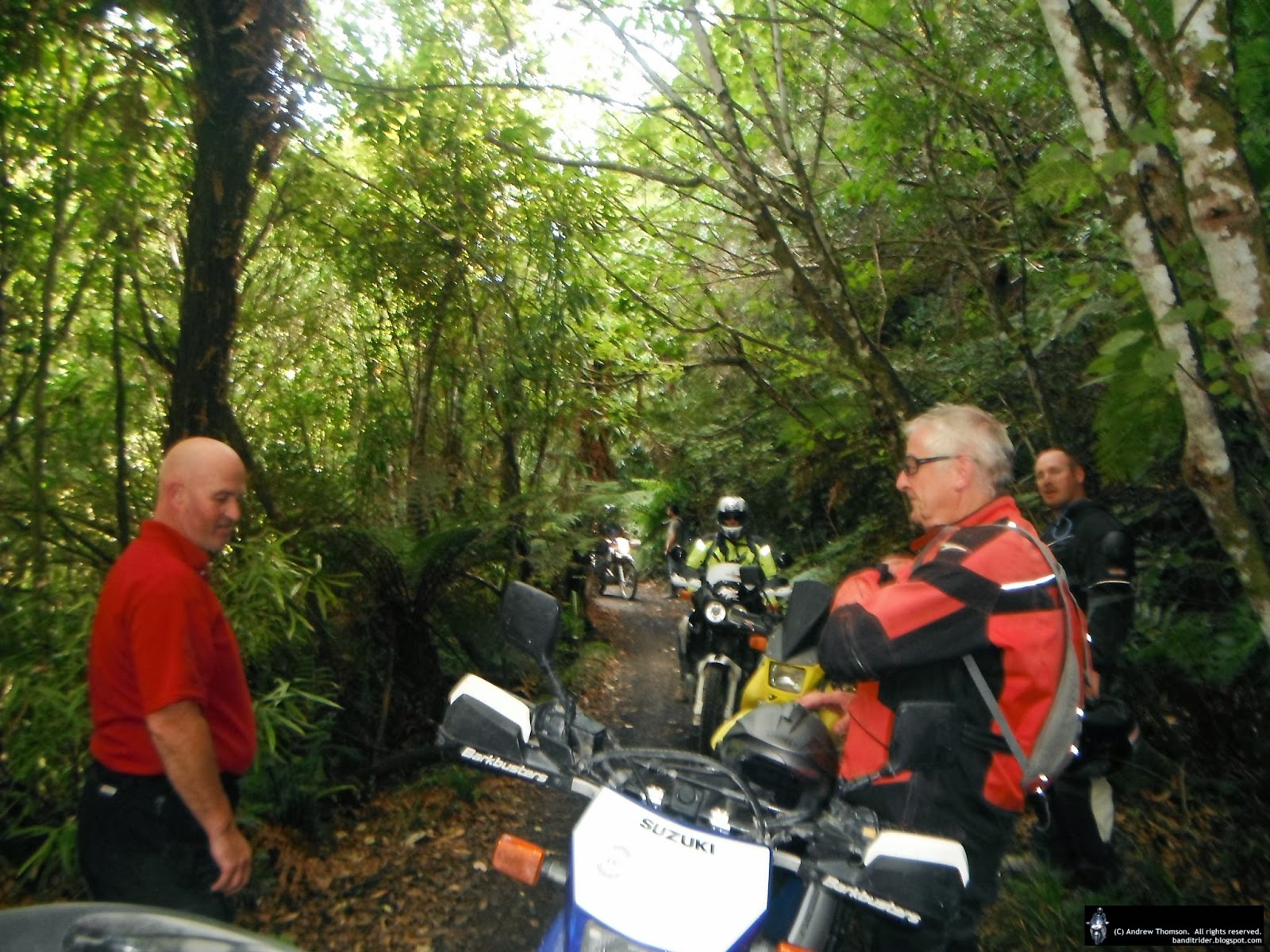 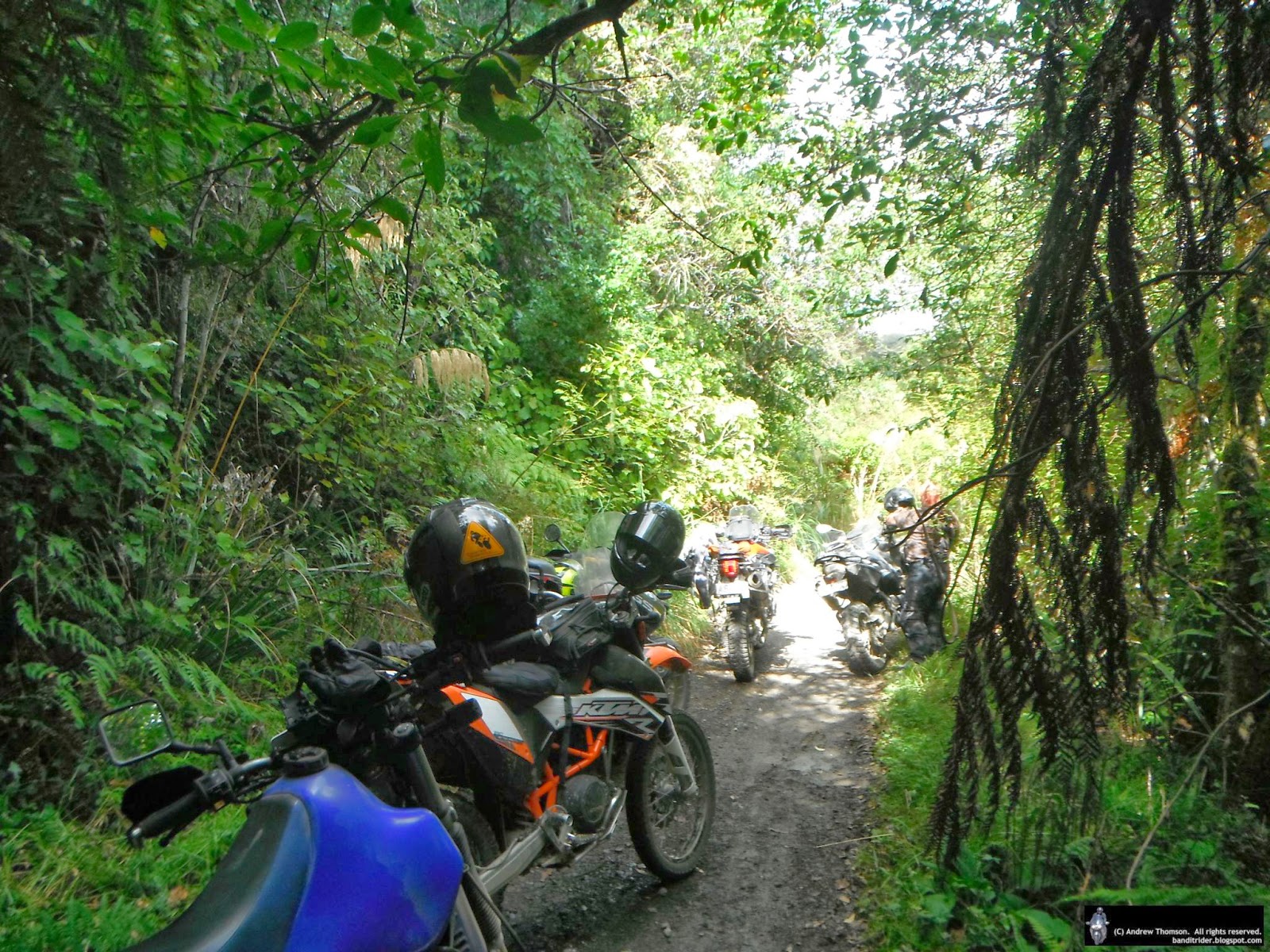 So far the Vee seemed to be enjoying things: 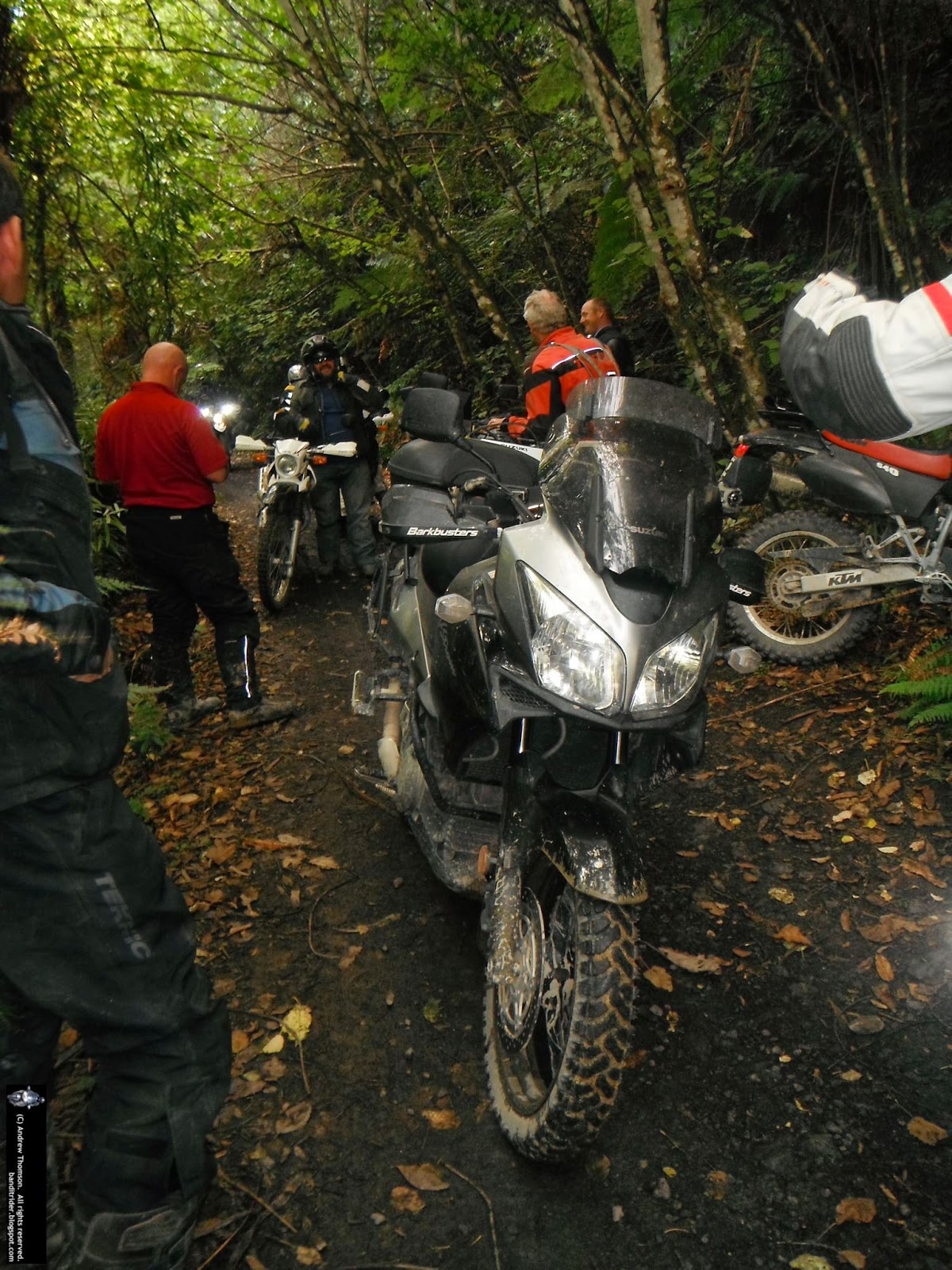 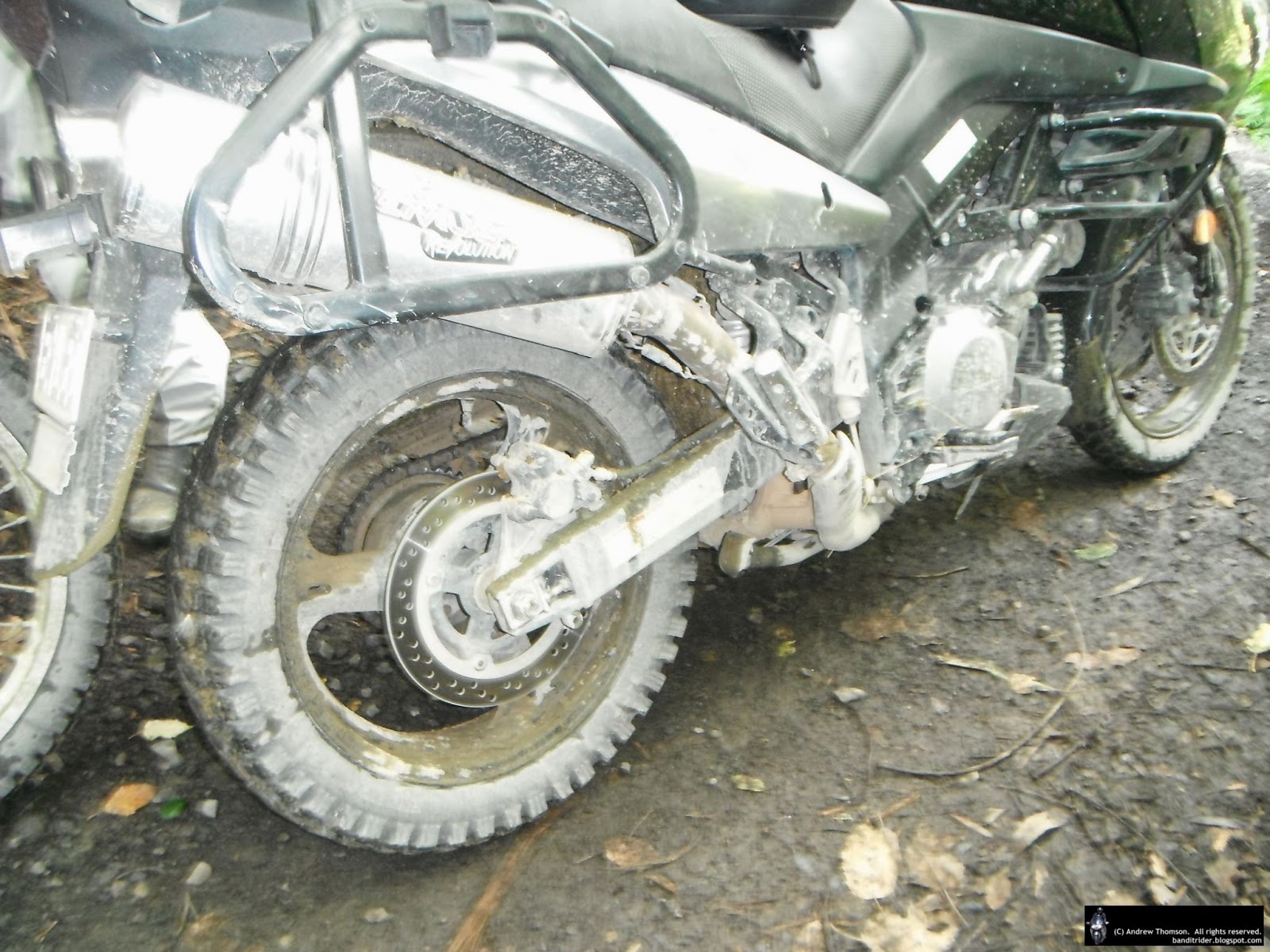 After this brief pause it was on up the hill and into terrain that was gradually getting a bit tougher.  As you can see from the end of the next video the first water crossing got the better of me and the poor bike decided to take a nap after trying to take on the undergrowth.  What actually happened was the rear tyre slipped off a rock (just as I was coming out of the creek) and pointed me into the bush and in the end I just couldn't hold up 200+kg of V-Strom.


Luckily there was help quick to hand and we soon had her upright again and pointing in the right direction.

The next big obstacle in our way was the rock slope/wall mentioned on Eddie's website.  By now we had kind of split into two groups with the smaller bikes way out in front and the big boys bringing up the rear.  As I approached the slope I heard a bit of noise up ahead and stopped the bike.

Walking up around the corner I came across a GS on it's side and the rider rolling down the hill to meet me.  Luckily there was no damage to rider or bike and we soon had the bike upright and rolled back down the hill.  This was hot work I tell you.  We also soon had a bike park at the bottom of the slope.

We all walked up the slope and started checking out lines and kicking the odd big rock out of the way and generally waiting to see who would be the bravest and tackle it first.

We all strung out across and up the slope to be ready to assist each other and I think one of the first to try the hill was one of the Africa Twins.  This bike powered up no problems making all sorts of impressive noises and bouncing this way and that as it hit some of the larger rock outcrops.  The Twin was followed by a few other bikes including the GS which also nailed it second time so I wandered back to the DL, took a deep breath and fired her up.

To approach the wall you first had to come around a sharpish left hander (with plenty of gravel on it), straighten the bike up and then nail it - buttoning off would be the end of your climb.  Well, that was how I did it anyway.  When I straightened the bike up for the climb I gave the old girl a real handful and she leaped at the wall.  I just hung on for the ride and tried to keep the bike pointing in the right direction.  According to a few of the guys the bike even launched itself into the air over one particularly large outcrop of rock.

In the end I got up the steep bit fairly easily but then had a few issues trying to slow the bike down and park it out of the way - I nearly dropped it again but managed to muscle it back upright and get the stand down on some reasonably level ground.  Now it was time to breath again and to have a wee rest while waiting for the last couple of bikes - everyone else made it up without any major issues.

Heart-rate back down to below 300 it was time to move off again and try to catch up with the others.  Pretty soon we came to the second creek crossing.  This one was a lot easier but there was another rocky slope upon exiting it.

Unfortunately Colin had had a wee moment on the slope so I had to stop in the creek and climb up to help him get going.  We got him up the slope and then he came down to help me launch up the slope from my parking spot in the creek.  I can't really remember what went wrong but on my climb up this much less serious slope I must have bounced off a rock or something and ended up dropping the bike again - this time on it's left hand side.  It wasn't a major but I broke the tip off the clutch lever (still plenty of lever left luckily) and bent the gear lever slightly.

With a little help from the guys I was soon upright again and we had another rest to let the sweat pool on the ground around us.  One more short section and we came across the rest of the guys waiting for us...

From this point on (as promised) the track got a lot better, being a bit wider, fairly flat and not as rocky.  I think I even found 3rd again.  We had one last little pause at the top before saying goodbyes and riders took off in their own little groups for the ride home.

I hung around a bit to wait while Steve got his gear sorted and had great fun chasing down the others once the road got better (really nice, fast gravel again) and ended up following most back into National Park again.

In National Park I refuelled and Colin F and I put on a few more layers for the quiet and uneventful ride home via Waiouru, Taihape and Vinegar Hill.

What a demanding but fantastic day's riding we had but I'm pretty sure that the V-Strom doesn't need to prove she can do the 42nd again...
Posted by Andrew Thomson at 8:27 pm