For a while now Neil had been threatening to give me a ride on his Tiger and on Monday I finally got the opportunity and he got to experience the awesomeness that is the mighty Vee...

We arranged to meet in Hunterville at 10 but as usual I was busting to go so left home at around 8:30 for the short hop to Hunterville.  We'd had a lot of rain the previous day (and throughout the week) and the roads were still pretty wet as I made my way over to Vinegar Hill.

As I was nearing the Stormy Point lookout I noticed that I was still far too early so I pulled in for a quick nosey and some pics. 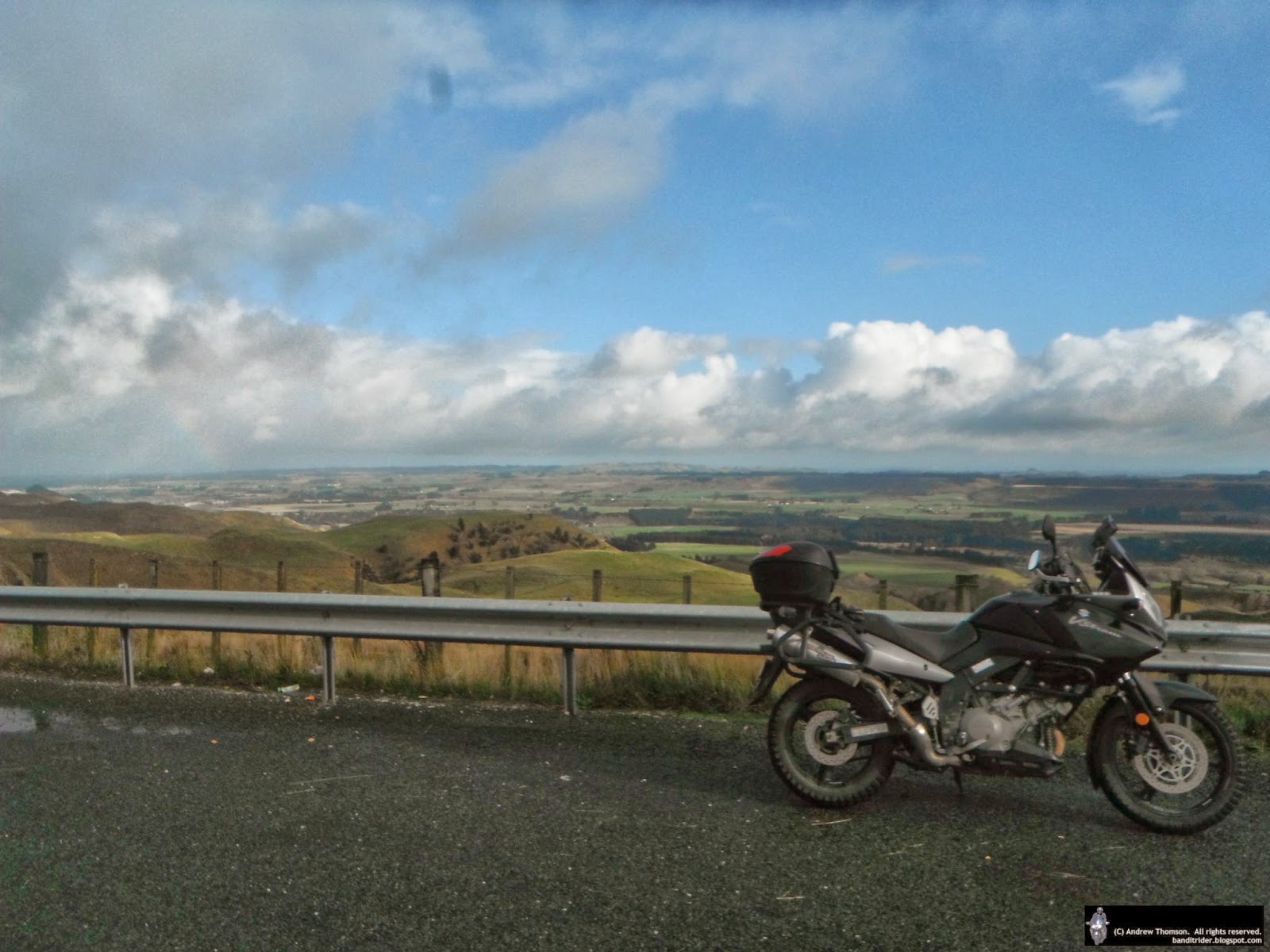 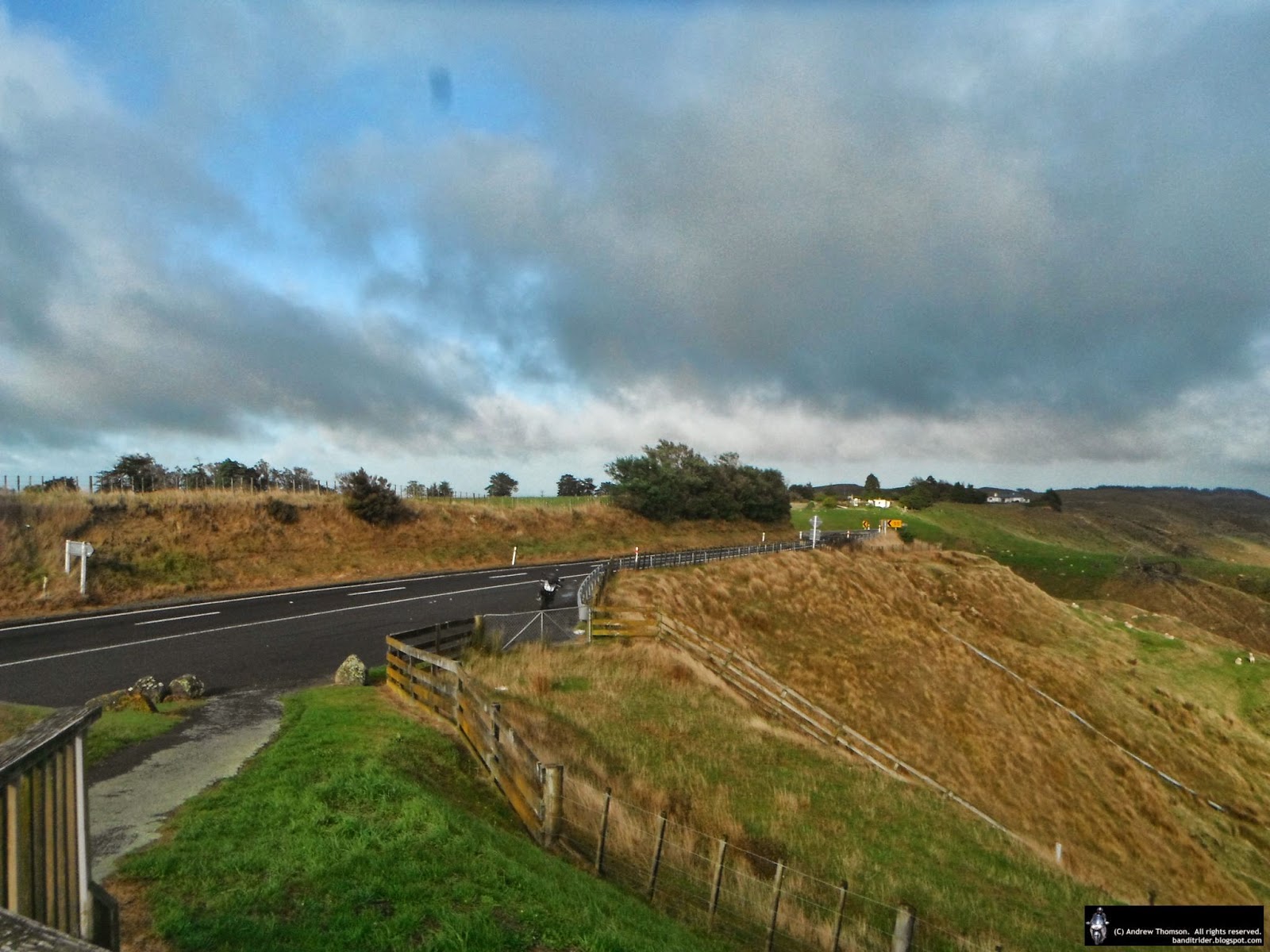 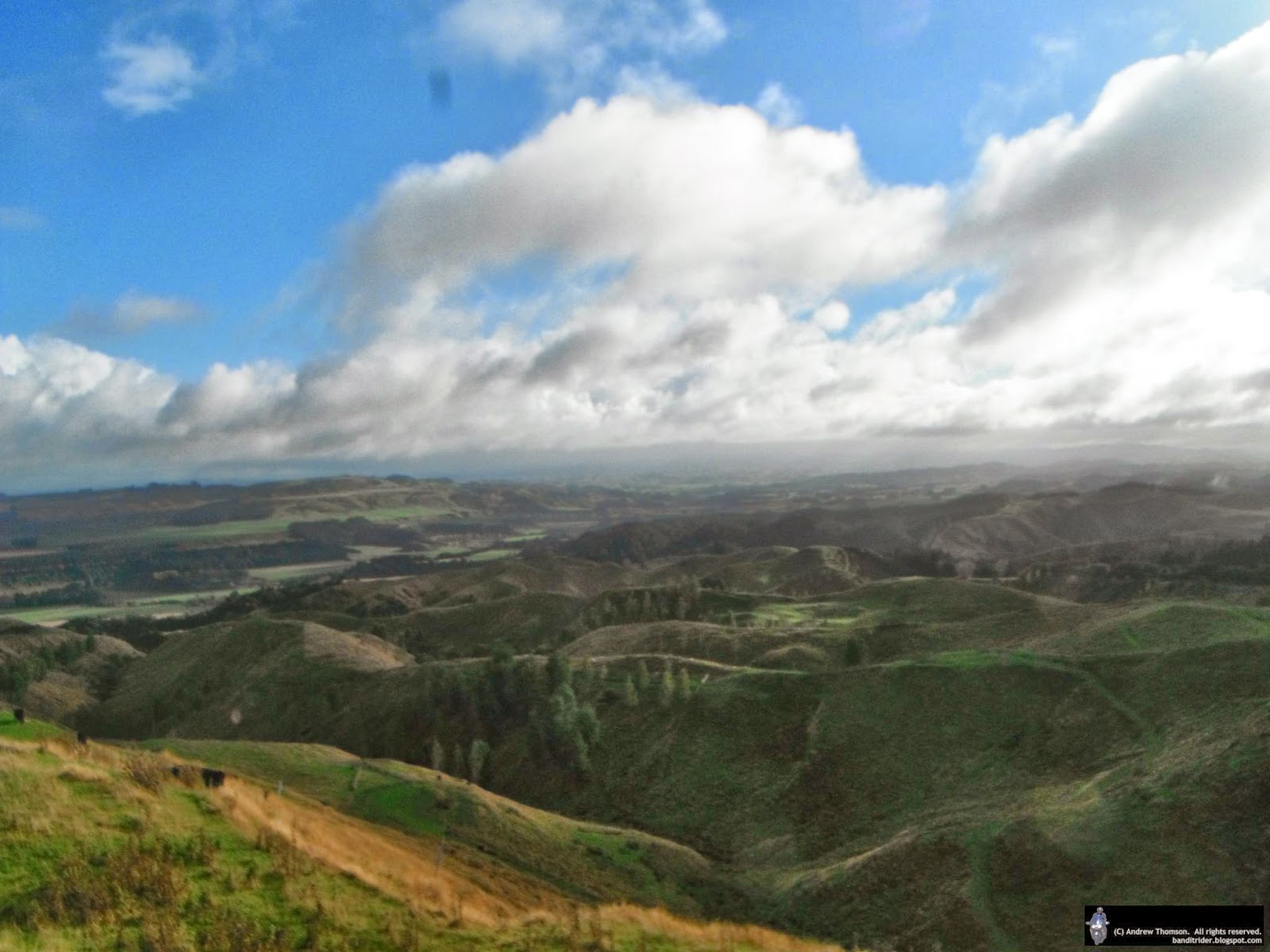 After my quick stop I polished off the rest of Vinegar Hill and then rode onto Hunterville where I fuelled up the horse and then moseyed around town to kill some time. 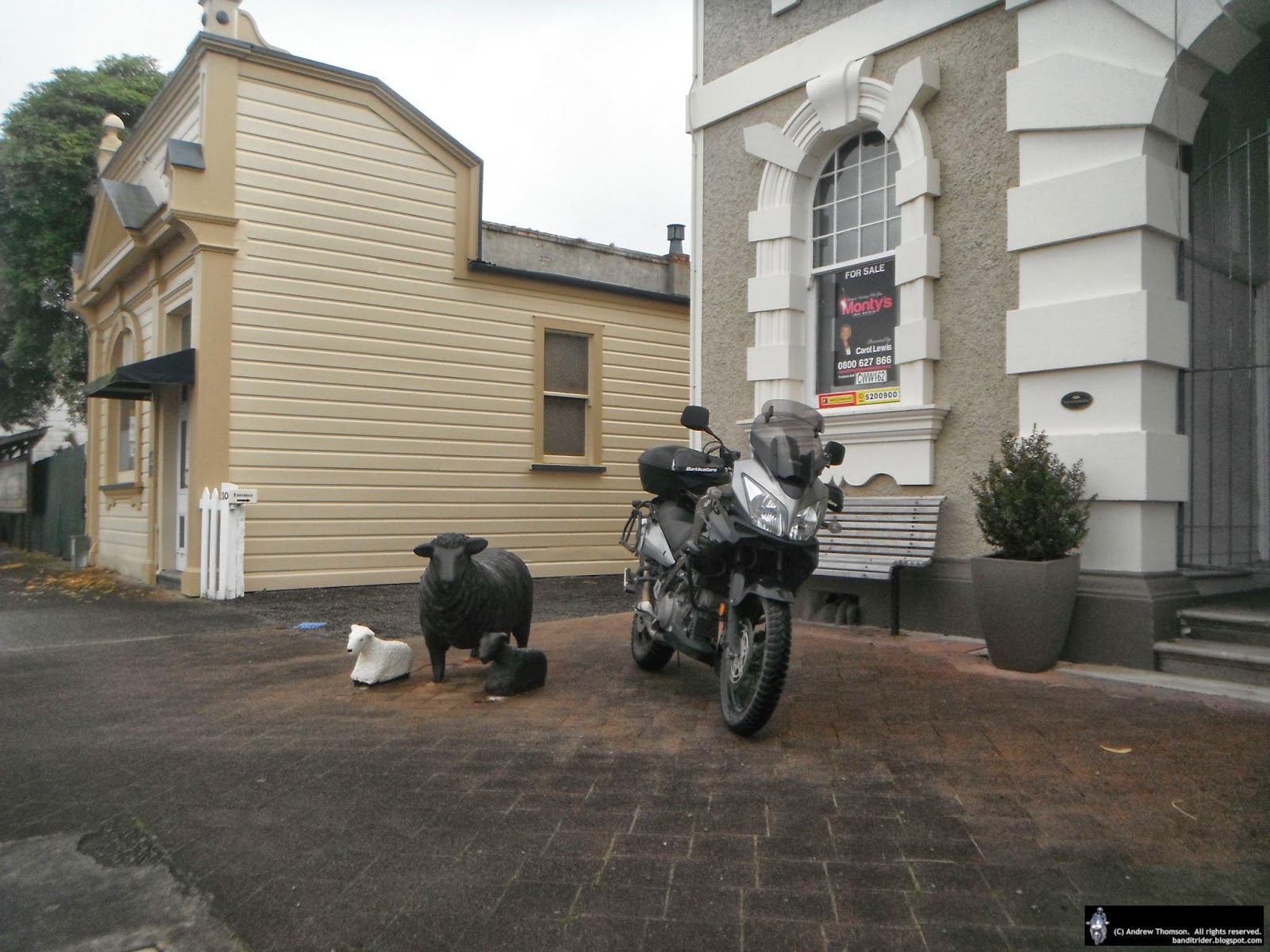 Hunterville is pretty small so the moseying didn't take that long so I parked up at one of the cafes and grabbed a coffee.  About ten minutes later the Tiger turned up and Neil bowled on in for some sustenance and some bike chat before our ride.

Eventually we decided that we couldn't sit in the cafe all day and that perhaps we should actually go for a ride.  Gearing up, we lowered our tyre pressures and explained a few things to each other about our bikes: "That's the front end - keep it pointed ahead of ya and try to stay out of the drains."

In my GPS I had a route planned to take us via Watershed Road to Taihape, so I led off - on the Tiger, with my GPS still on the Vee...Nevermind, once Neil pointed out the first turn-off I was sweet and we were soon setting to work getting used to each other's bikes.

I may try and put a few words down about my thoughts on the Tiger at a later stage but for now I'll just say that the little 800 was really easy to get know.  It felt light and responsive and pretty soon I was chucking it around like a dirt bike.  And then we hit our first bit of gravel on Watershed Road...All that rain we'd had had really settled the gravel down and the E-07's on both bikes felt really great.  You can probably tell from the video that we were both enjoying the day so far:


Watershed Road eventually becomes Tiriaukawa Road and changes from gravel to seal which lasts all the way until we hit SH1 just North of Taihape.  We turned back into Taihape and made for our usual cafe for an early lunch.  While we were eating there was a brief downpour and we congratulated ourselves on our impeccable timing...

Once we had finished our lunch and the weather had improved it was time for part two of the ride.  This time we used our heads and swapped GPS units so that I could see my route while still riding the Tiger.  See, we're not dumb after all...

Except, I turned too early upon leaving Taihape and we ended up on the wrong road for a while...

As it turned out this wasn't such a bad idea as we got to ride some of the best gravel roads around twice - once in each direction - as we took in Matawhero, Rangitikei Valley, Mangaohane Roads all the way from Pukeokahu to the Napier-Taihape road and back again.  Once again the gravel was in perfect nick and we had a ball.


Back in Pukeokahu we then took Pukeokahu Road through to Taoroa Junction.  The gravel through here was a bit more demanding.  The roads were a bit tighter and conditions a bit softer in places.  I had a couple of moments where the front end went out on me and I had to wrestle the bike back into line - Neil, time for a new E-07 man!

We carried on up the road a wee bit to Gravity Canyon where it was time for another break to watch people throw themselves off a bridge and to chat about the ride. 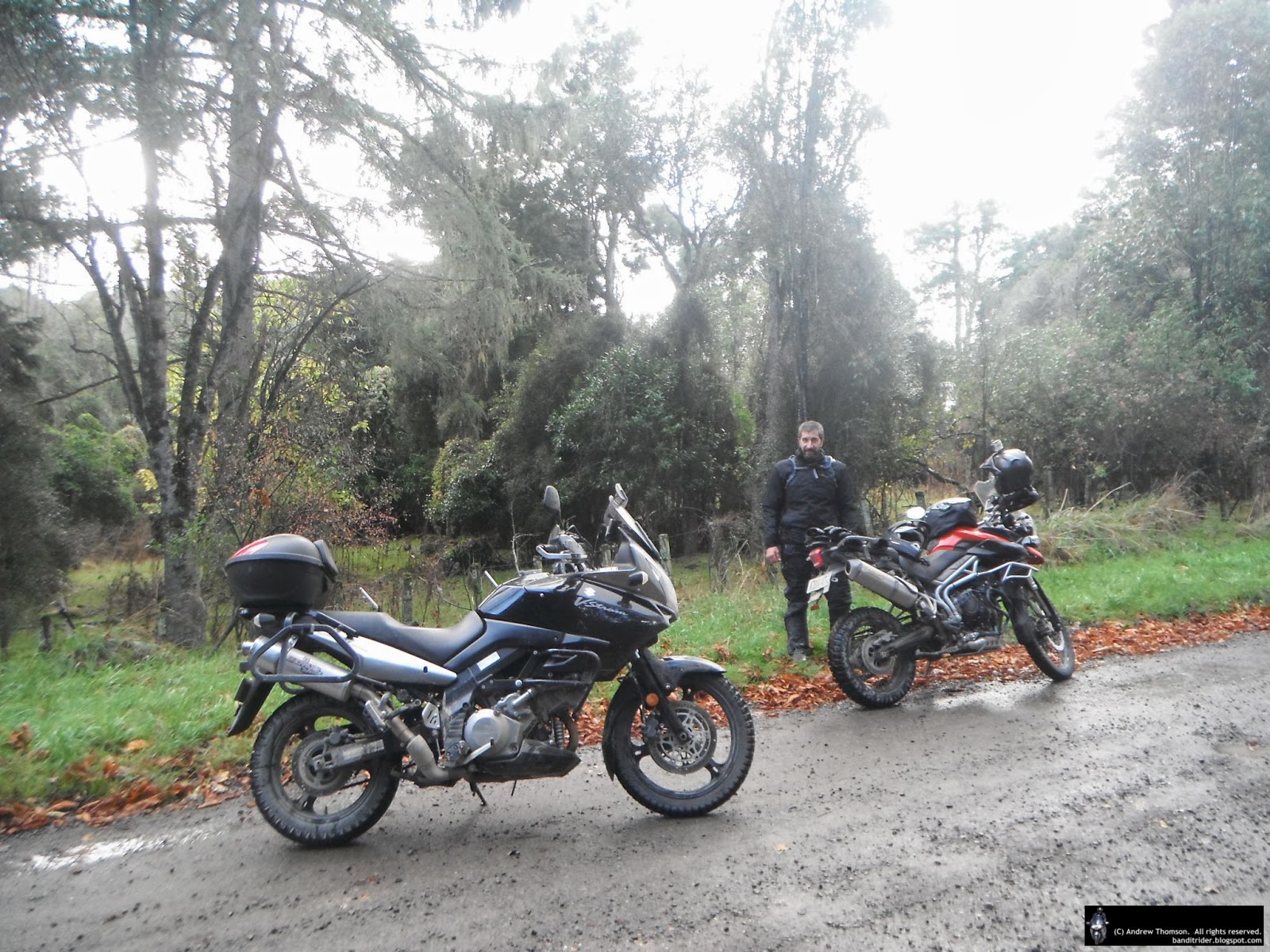 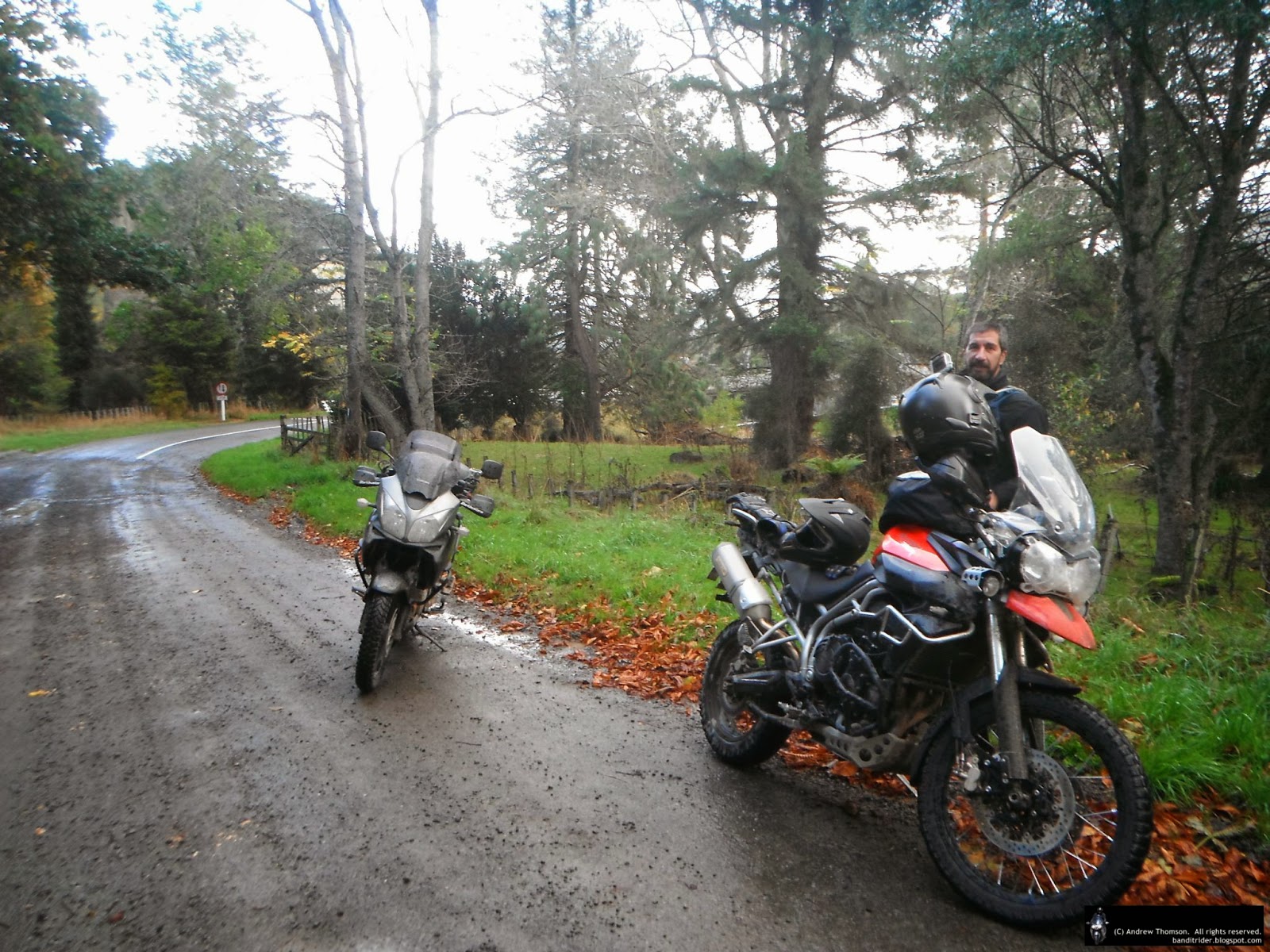 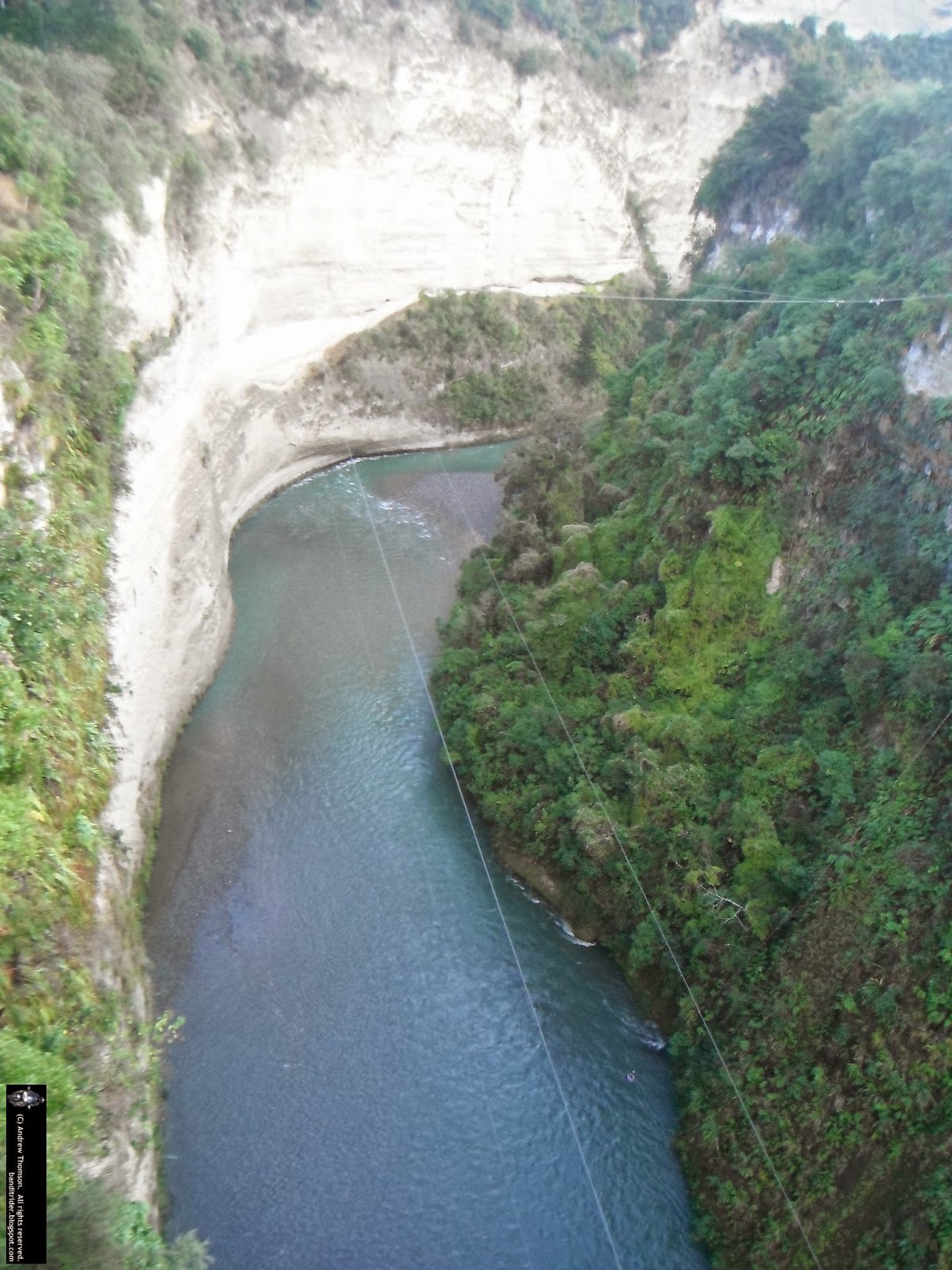 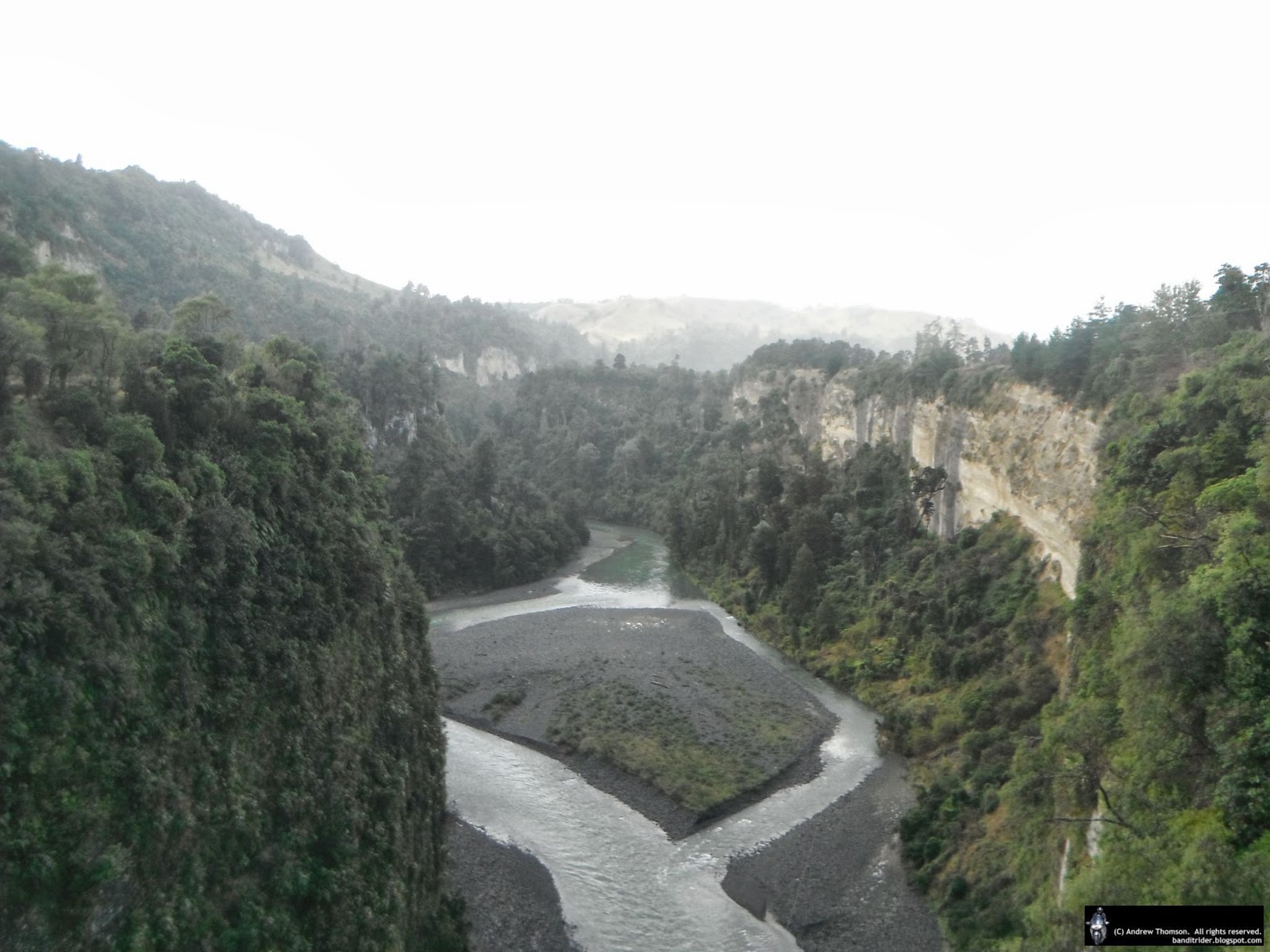 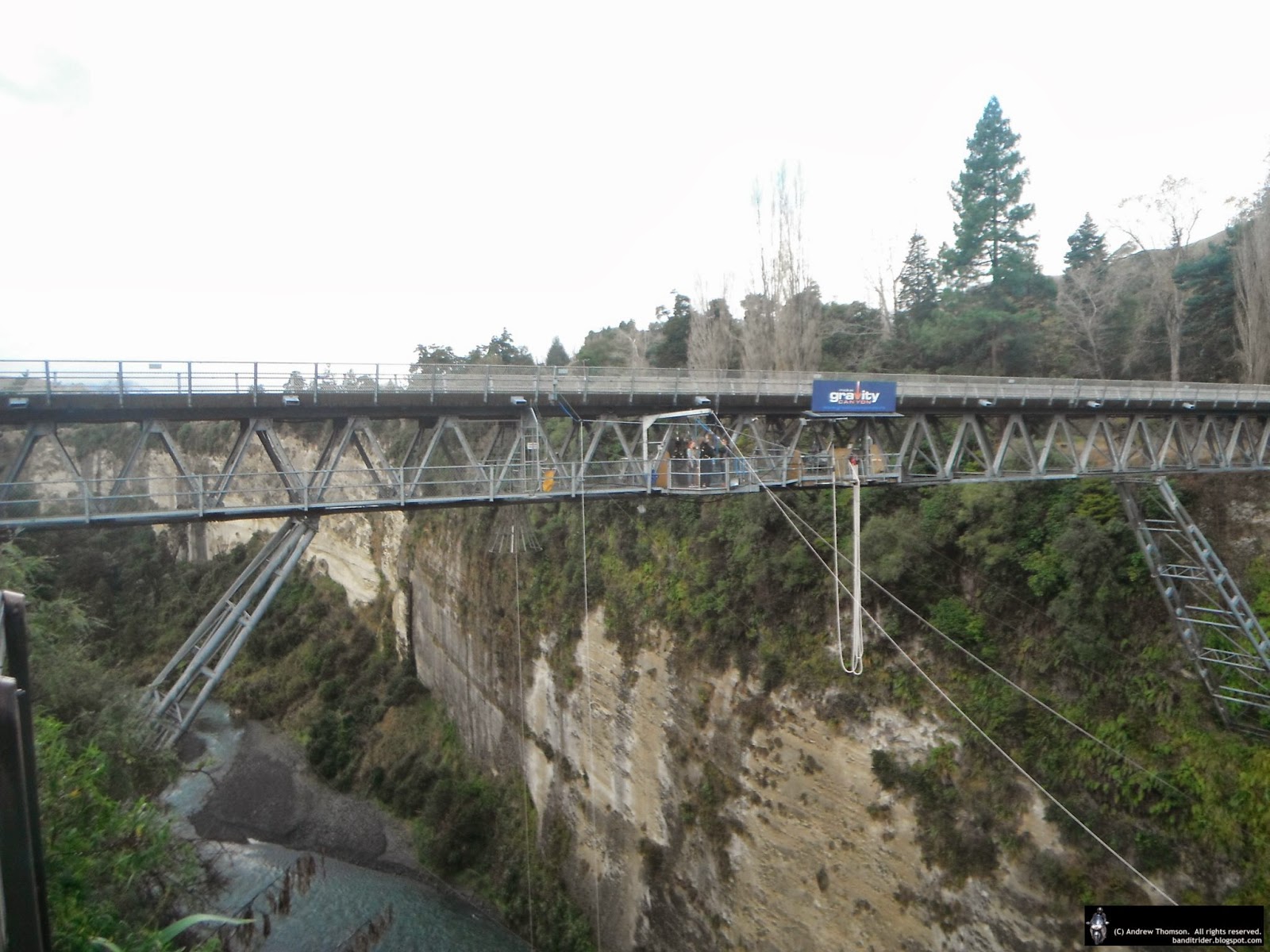 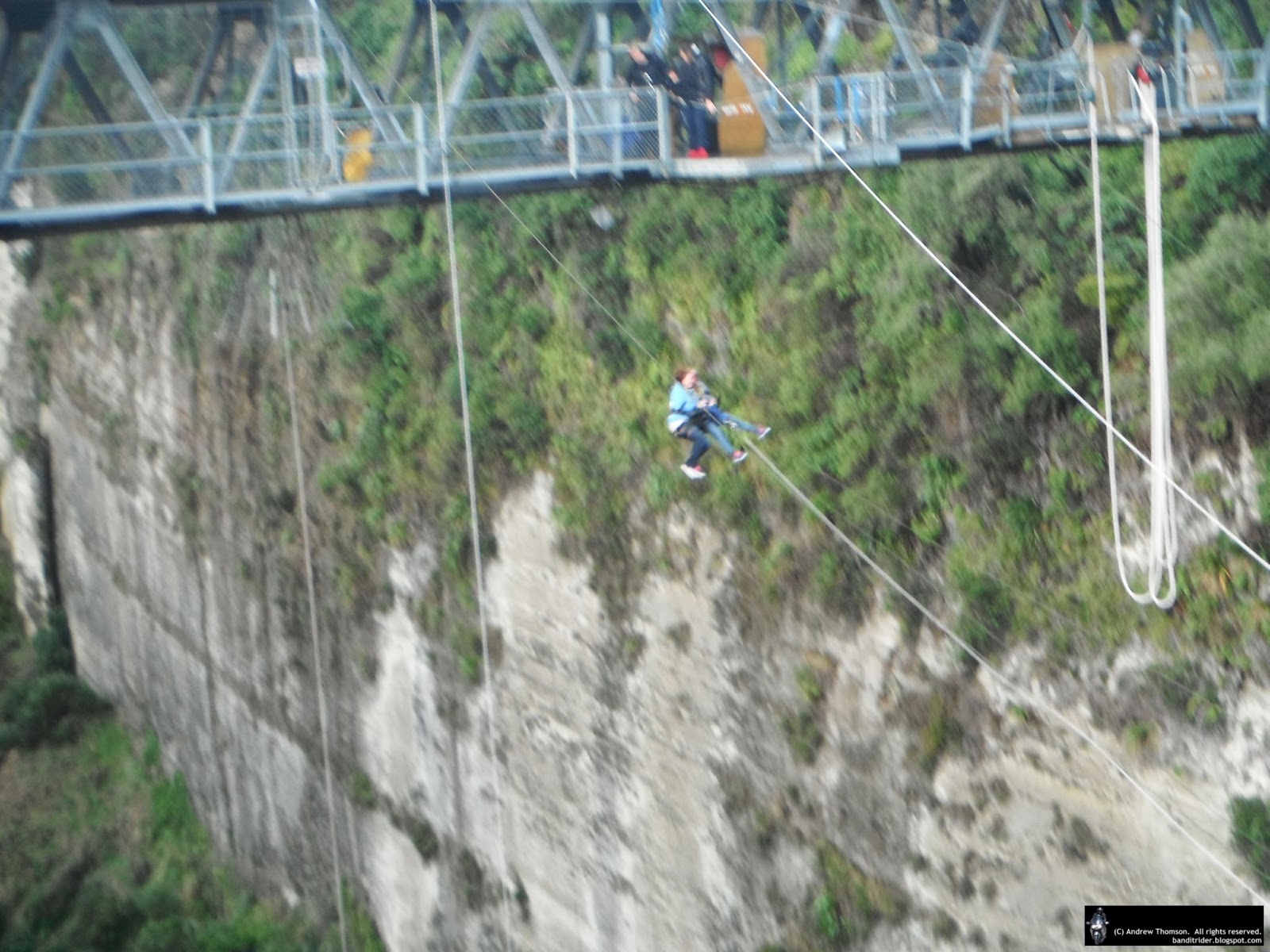 After our break it was time to swap back onto our own bikes for the ride home.  I'd had a ball on the Tiger and now had to relearn the DL as we rode back to the main road.  There we parted company and I settled into pootle mode on SH1 before taking in Vinegar Hill again to get me home.  One awesome day out on two great bikes! 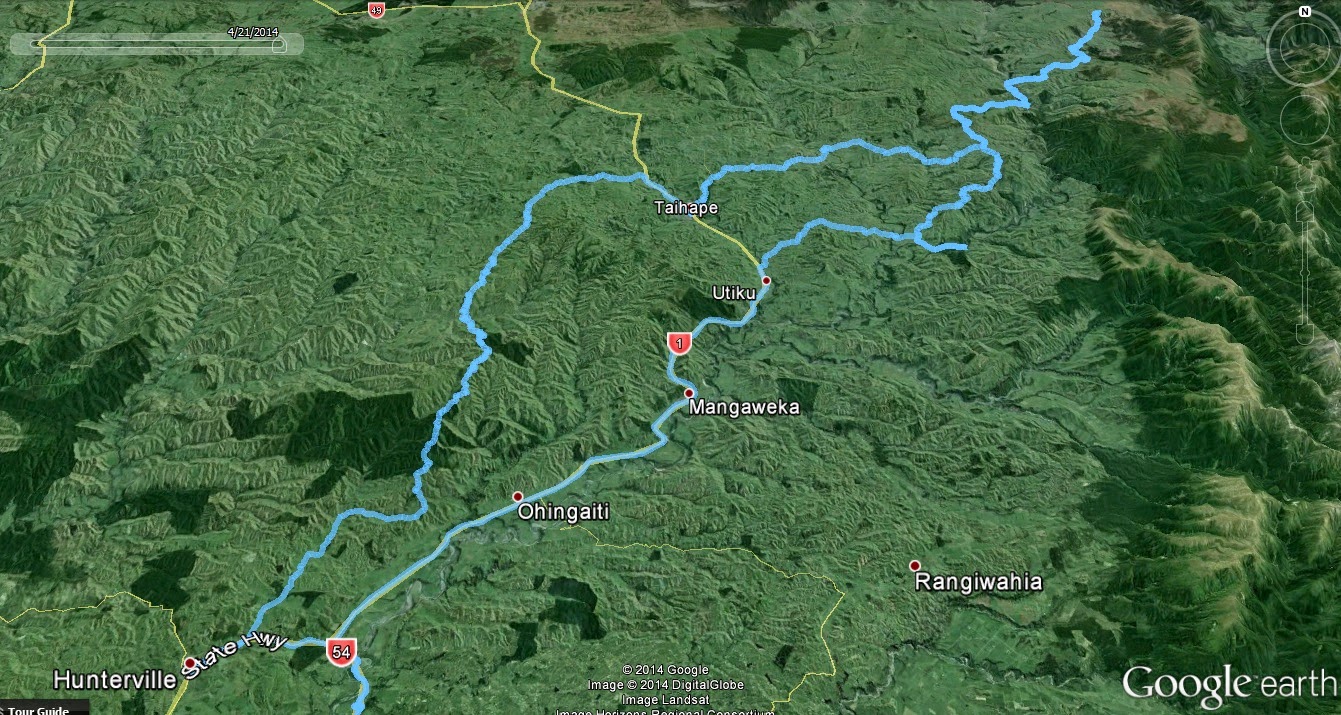