With the return to work rapidly approaching Colin and I thought that we'd better get in another quick ride.  This time around we substituted the extra KTM of John's for Glen on his mighty S10.

Naturally we had put a lot of effort into our plans and so right on time -  according to our magnificent plans - the guys rolled up to my place, drank coffee and then we vamoosed up over the track.

As usual when heading over that way on an Adv bike, we managed to sneak in the short bit of gravel of Tararua Road and check that we still knew what we were doing.  The gravel was dusty and hard and I worked out that my rear Motoz is definitely getting a little tired...

Once again we fuelled in Pahiatua before scooting off towards the Makuri Gorge.  But, rather than either climbing up over the hill to Pongaroa or turning off onto Coonoor Road, we turned onto Pori Road to ride it in the opposite direction than we have on our last few trips over it.  The photo stop is still the same whichever direction you ride it in... 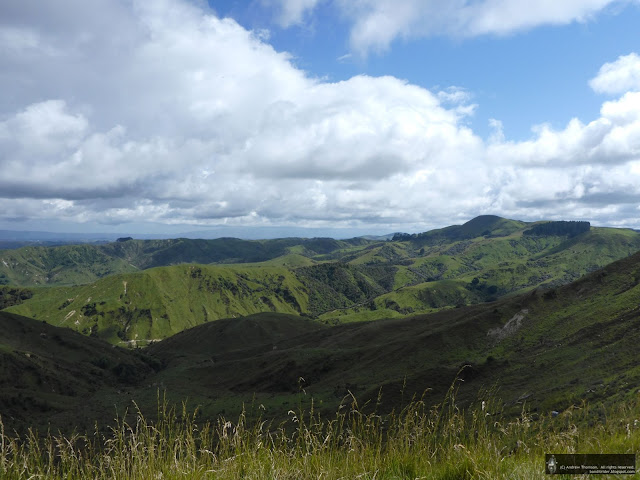 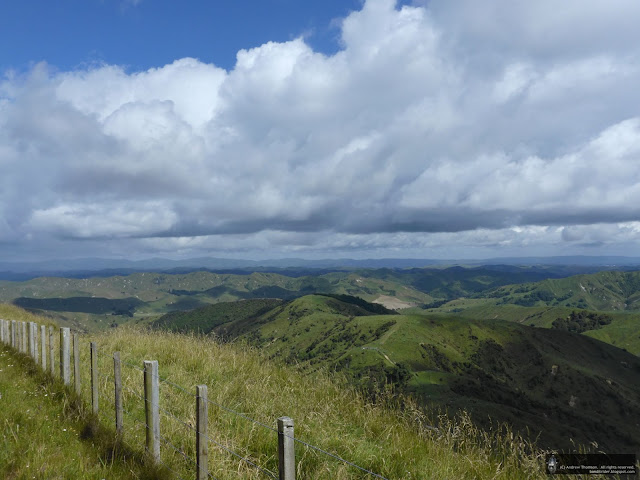 The ride down the hill was pretty uneventful even if there were the odd woolly obstacles to avoid. 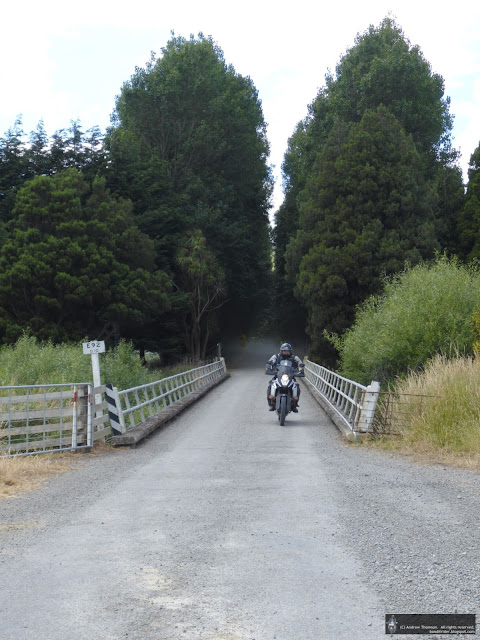 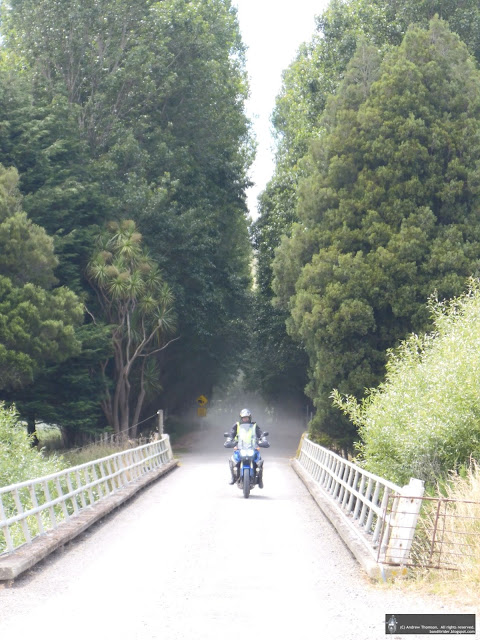 Turning left on Route 52 we smashed a bit of tarmac for a while before turning off onto Waiohoki Valley Road.  It was here that we first got to enjoy some superb gravel that had benefited greatly from the recent rain.  It was sensational - no dust and a slightly softer surface offering oodles of grip and some nice controllable sliding.  A stop at the turn-off to Huia road saw three maniacs grinning at each other and hungry for more.

Huia Road was more of the same and got us onto Spur Road which was generally in a similar condition except that it is a bit narrower and has tighter corners to contend with.  There were also a few sections where some heavier gravel had been laid to cleanup after slips and around a current logging operation. 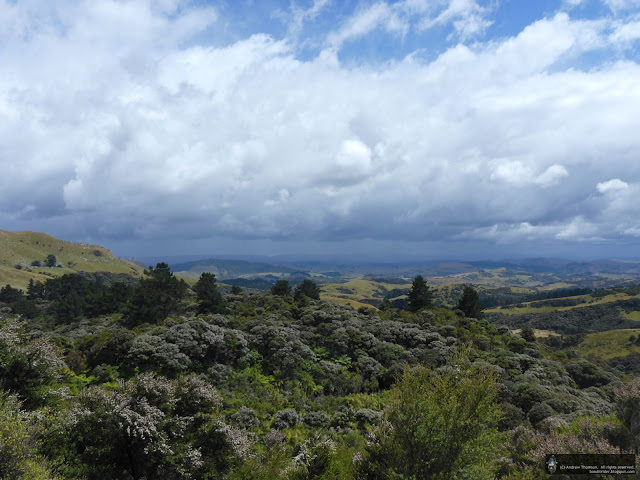 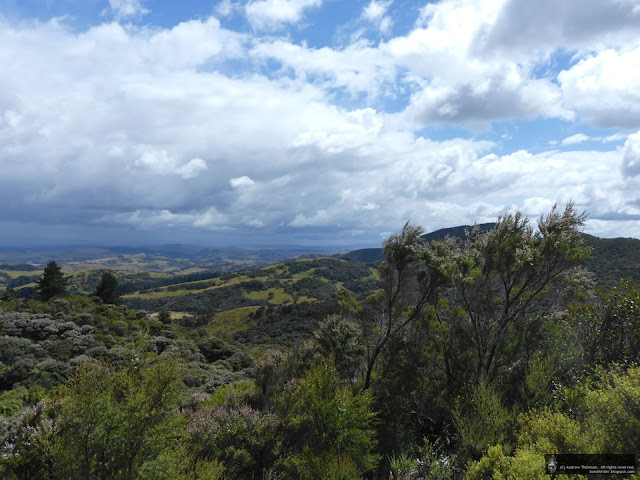 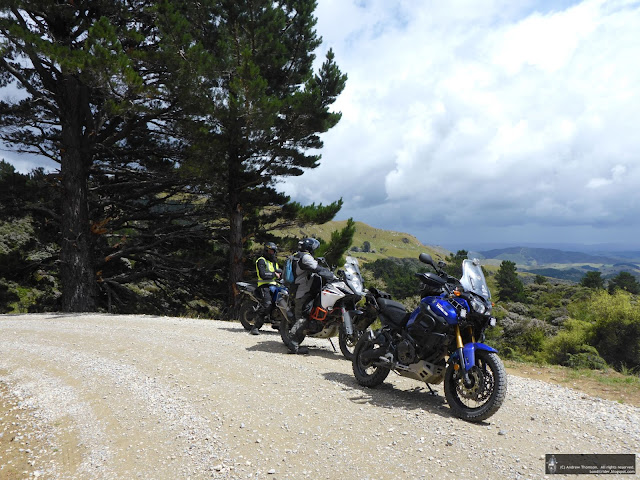 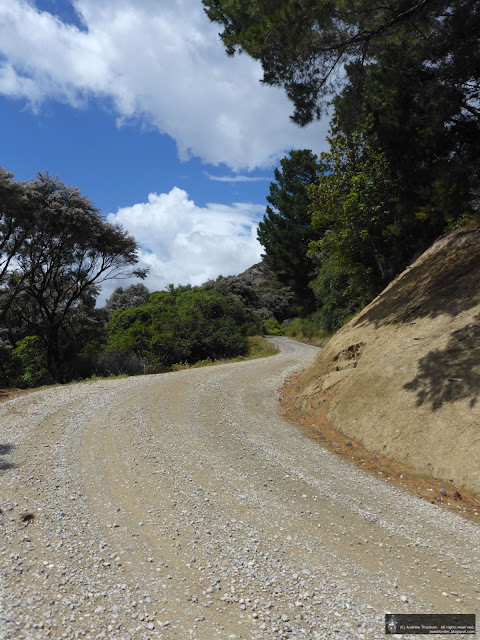 Dropping down the other side of Spur Road the road gets a bit tighter and it was also a bit softer in places - the big bikes tend to slither around a little in this and braking into corners can get a little exciting.  There was also a really big tree that had fallen across the road but someone had cut a small, perhaps car-sized gap in it to allow us through.

Marainaga Road was next and this was a bit more open and still offered up some really nice gravel with just the odd mushy bit in some of the corners.  It was great to start to get the speed back up in preparation for Coast Road...

We only got to ride a short section of Coast Road's famous gravel as we were making for Pongaroa for lunch but if you watch a little of the last bit of the video below you'll be able to see why we like it so much.


What we didn't like so much is that we managed to catch up with the rain and with plenty of vents open on my jacket I was kicking myself a little bit.  I was too stupid to stop and do them up either, we just gapped it for the pub. 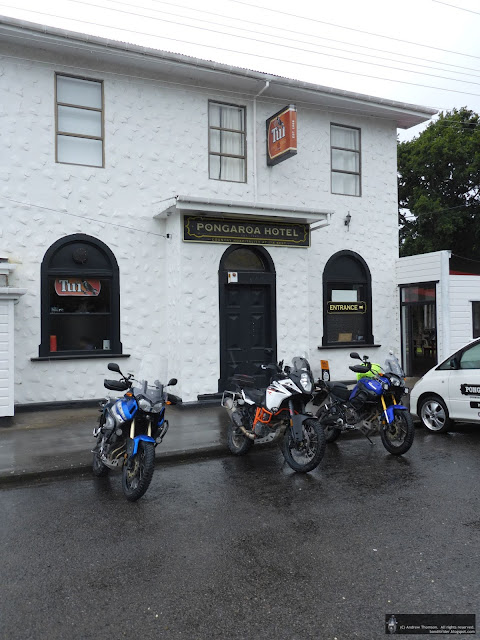 Thanks to some frequent downpours, we spent quite some time having our lunch before finally gathering up the gumption to get out amongst it once again.

The next bit of 52 to the turn-off up Waione-Horoeka Road is not what you would call a delight when wet.  It is a mess of slippery tar with plenty of humps and bumps that can make things exciting - perhaps it'll get fixed properly right around the time hell freezes over?

Waione-Horoeka Road got us across to Towai Road fairly quickly and we were really enjoying the ride until we started hitting some very slippery stuff.  I've ridden this road quite a few times now, including once in pouring rain and it's never been quite as interesting as it was yesterday.  Wherever there was the littlest piece of clay sticking out from under the gravel it was slippery, very slippery.  Often both ends would head off in different directions and that's not that ideal when there is a decent drop off over the side...I decided we needed a conversation about it halfway up... 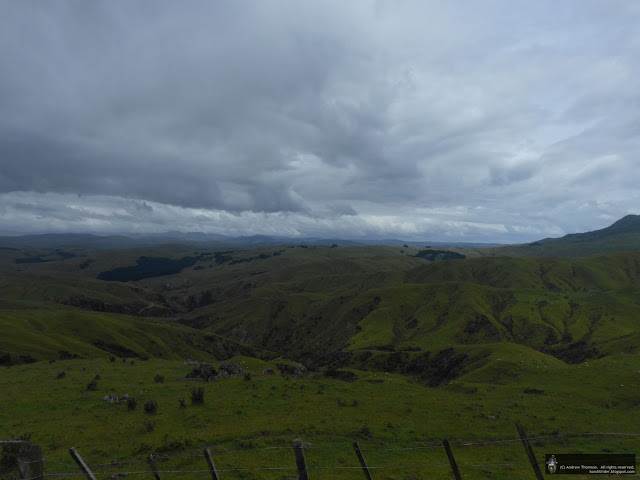 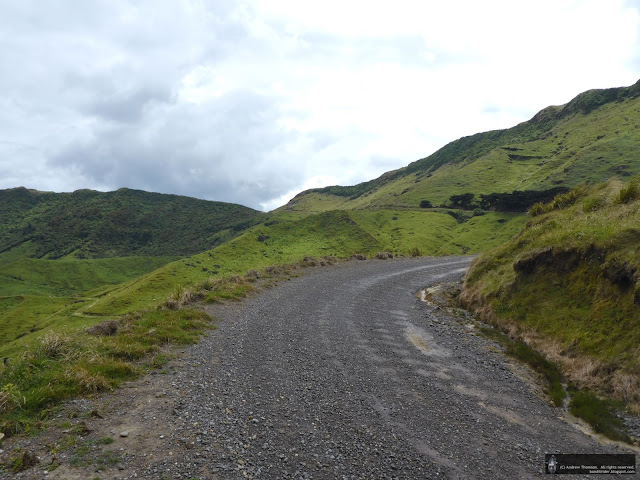 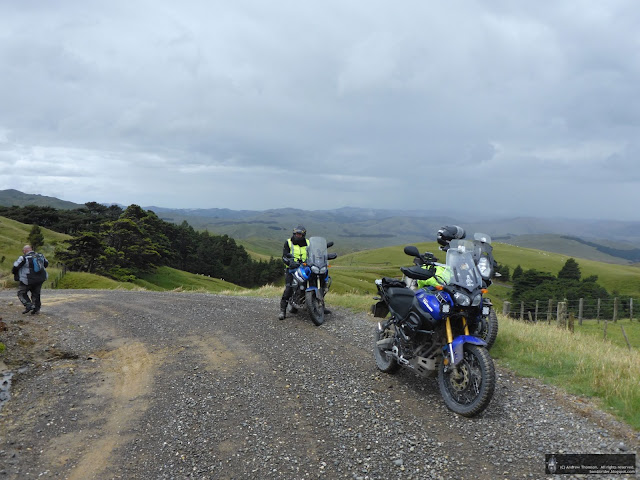 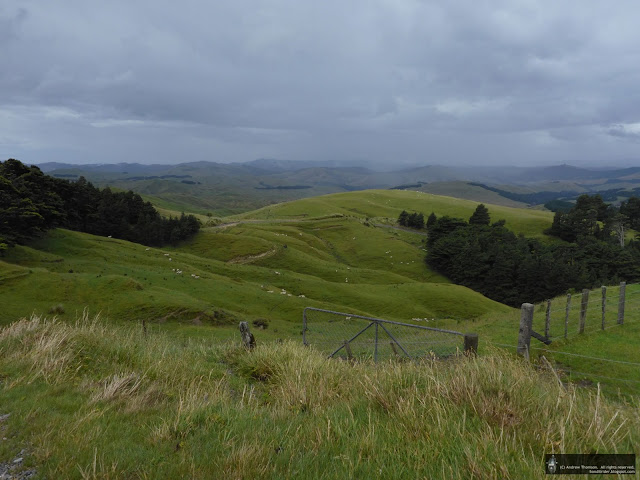 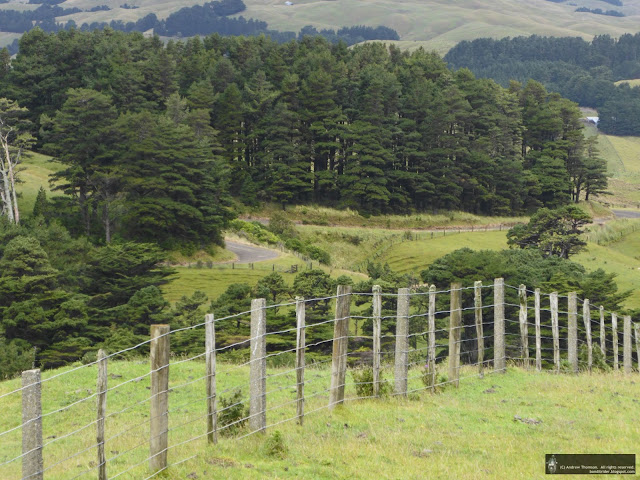 In the video you can see a the clay sections starting to appear at around the 9 min mark.  The video doesn't really capture some of the "moments" that well but it looks like there may have been one at around 11:13.

Back on the bikes we submitted the hill and dropped down through the lime works (19:15) before hitting some really nice gravel again (22:50) and quickly forgetting about the dodginess on the other side of the hill.


At the intersection we veered right again to scoot through Waitahora Road where we managed to find plenty of wind to blow us around before joining up with the Weber Road to take us back into Dannevirke.

From Dannevirke we took all sealed (but back roads wherever possible) to Pahiatua.  Once again Tararua Road needed to be ridden and then there was one last dash over the track before finally ending up home again.  I believe Glen brought some wool back from Tararua Road with him on his gear lever too...

Another top ride to finish off a most excellent break! 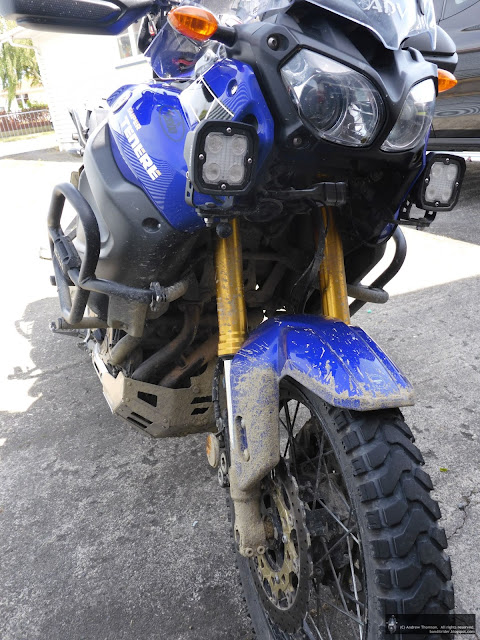 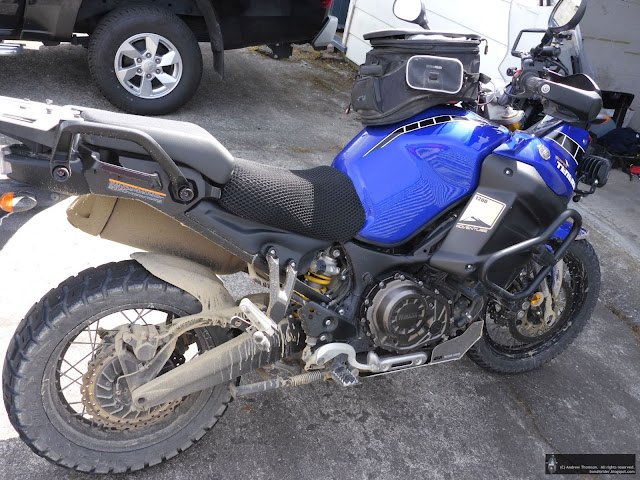 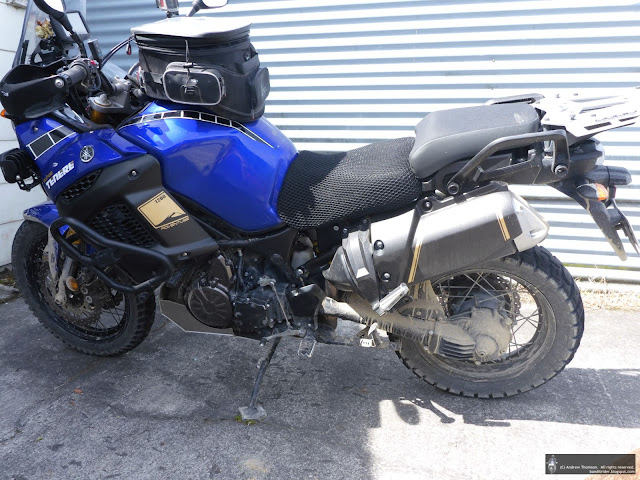 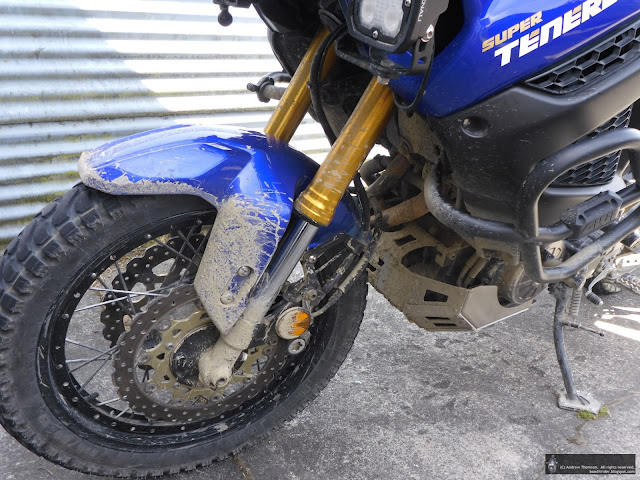 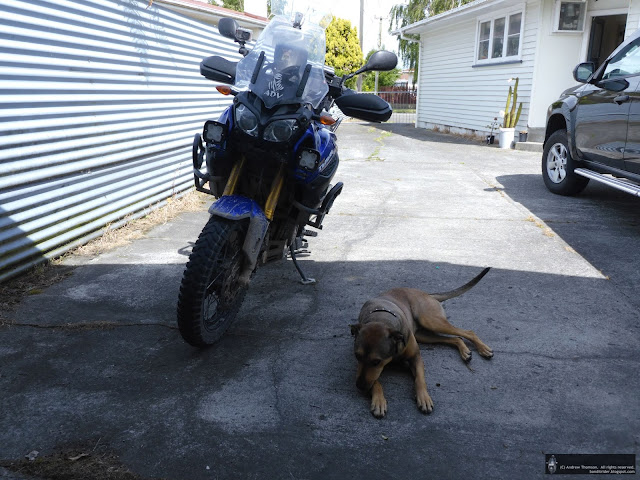 Posted by Andrew Thomson at 4:21 pm