Saturday's ride started off early with the topping up of the Tenere in Kurow just before 8 and then pointing her up the Hakataramea Valley.

The road started off sealed before narrowing up a little and eventually turning to some nice fast gravel.  I had the camera on for a lot of it but there was plenty of fog around to spoil the view.


Towards the middle of the run the road got a little tighter and there was the odd rougher spot around a few small fords - nothing too tricky.  There was also a bit of wildlife to avoid (check the video) and a gate to deal with.

Eventually the fog burned off and there were some nice views out across the giant valley. 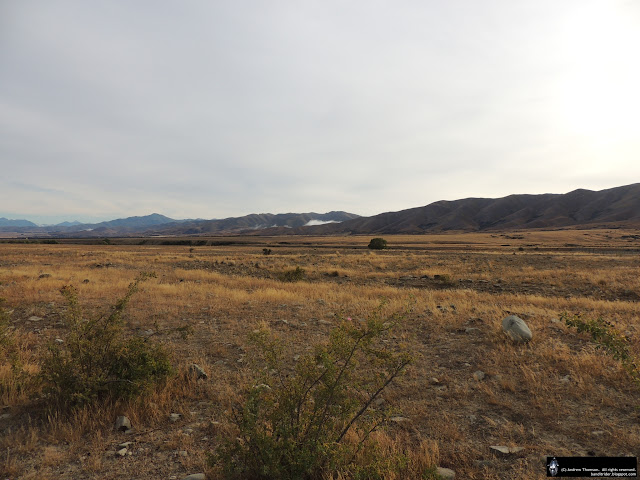 And then all of a sudden (surprisingly quickly it seemed to me) Hakataramea Pass ran out and I was on the seal of Haldon Road about 30 odd km from Tekapo.  A little of action from the pass below:


In Tekapo I stopped to for some pastry wrapped road kill and grabbed a sandwich for later on in the day.  I then headed West in the hope of riding Tekapo Canal Road up the Eastern side of Lake Pukaki but when I got to the turn-off the gate was closed and looking pretty locked to me - dagnabbit!

So, I had no choice but to turn around and head back to Tekapo and then try out Lilybank Road up the Eastern side of Lake Tekapo - so many lakes, so little time...

After an itty-bitty bit of seal the road quickly went to gravel which although fairly fast was also deep in places so picking decent lines was a pretty good idea.  There were also hikers and push-bikers to avoid too.  Not sure what they were doing up there... 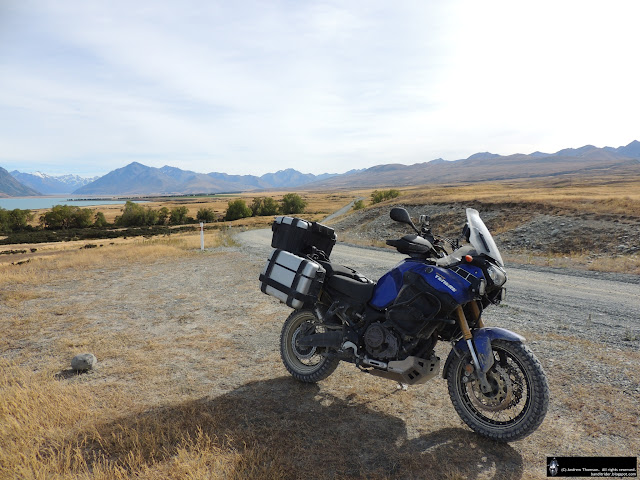 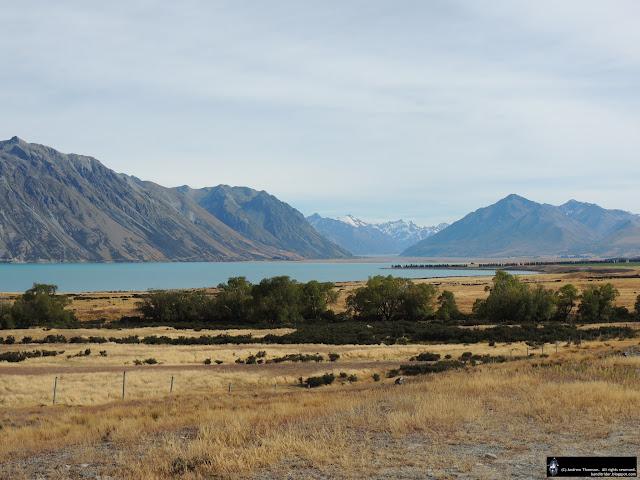 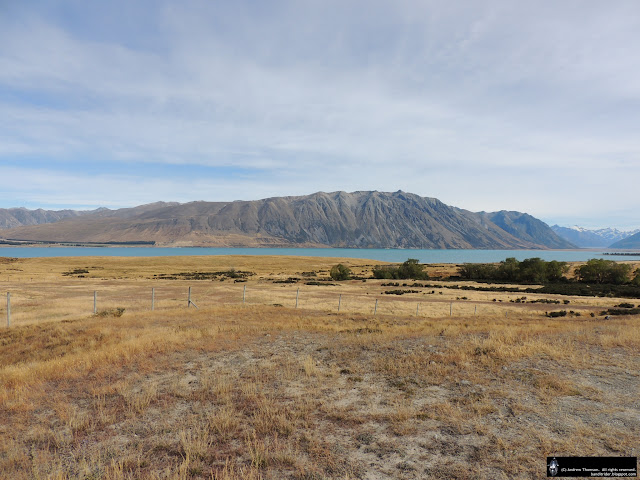 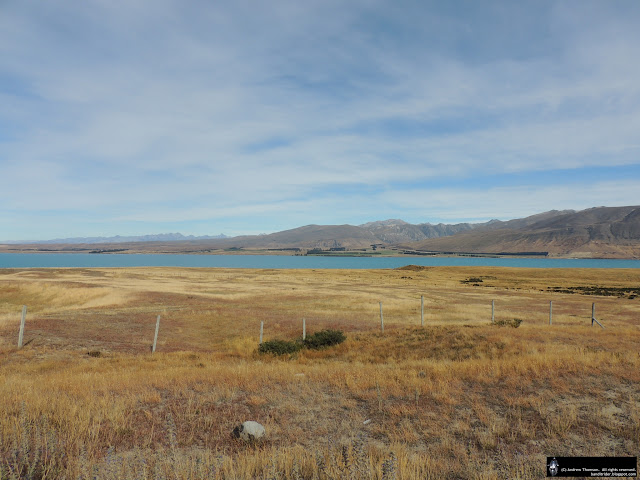 I carried on up the road quite some way (and past a farm gate) before finally deciding to call it quits and turn back around.  Funnily enough the road was in similar nick going the opposite direction too.  And there was the odd reason to stop too. 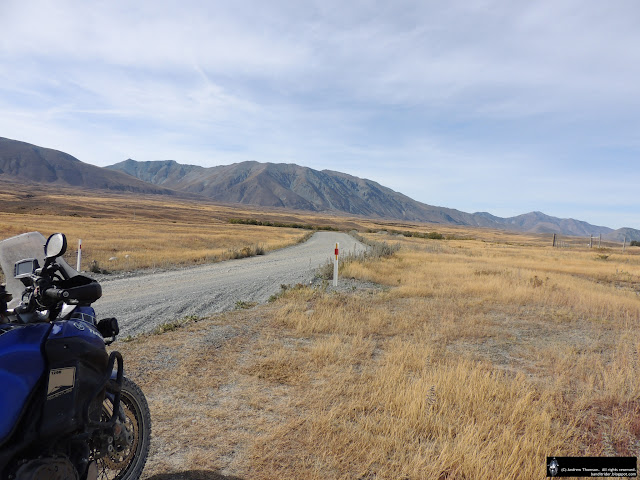 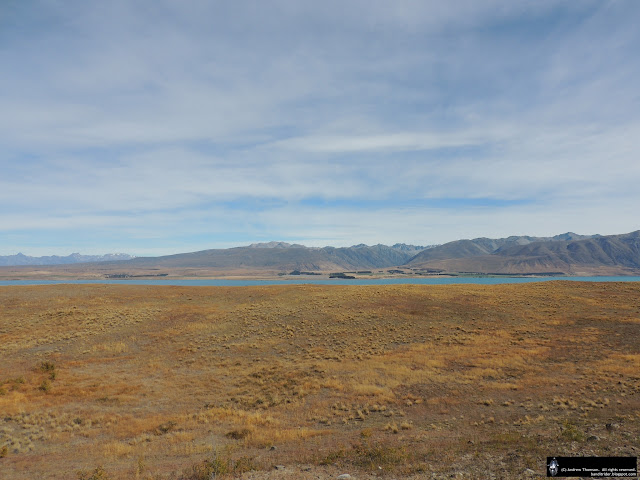 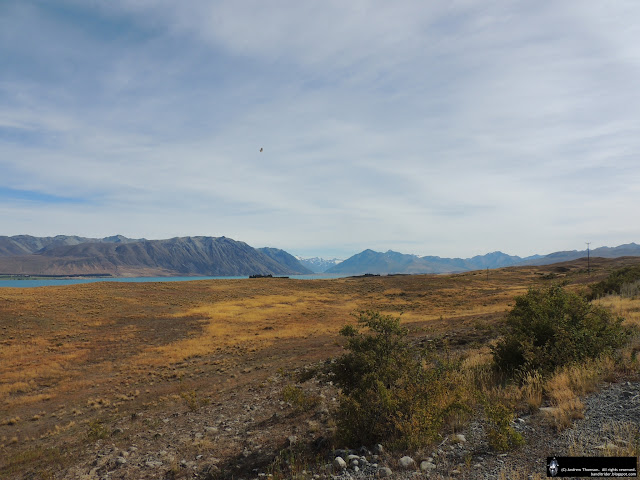 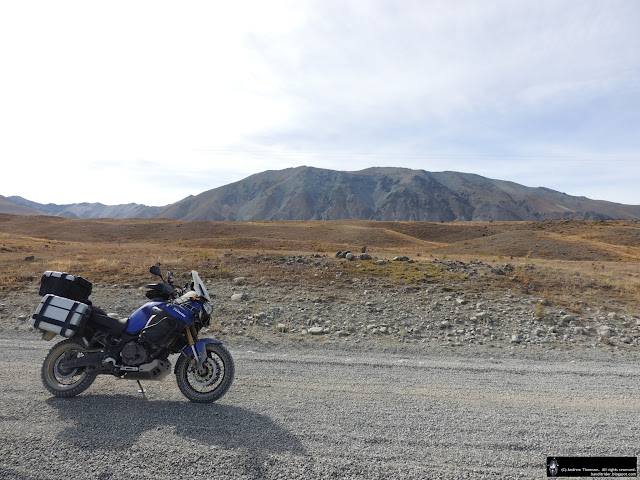 Here's a taste of what the road was like by Tenere...


Back out on the main road again, I was fantastically early with only about 80km of sealed road to take me through to my night's accommodation in Geraldine - how boring!  So as I pootled along I tried to think of some possible variations I could work into my route.  I ended up pulling over at Dog Kennel Corner and whipping the laptop out of my topbox to take a peek at Mapsource and see what I could come up with.

It was fairly hard trying to do this on the side of the road without a mouse - a map would have been a lot easier I think.  So I gave up and carried onto to Farlie where I had a quick stop before leaving my planned route and aiming for Pleasant Point out closer to the coast.

It was a lovely Saturday and there were plenty of other bikes out enjoying the day as I trundled along at a very slow cruise.  I kept my eye out for a road turning off to the left that I had noticed on the laptop and I think I even got the right one in the end.

Cleland Road took me in a Northerly direction into Totara Valley before finally taking me back to the main road at Pleasant point.  Looking at the maps now, I should have continued North a little more as there looks to be a few interesting looking roads in there that would have taken me back onto SH79 to Geraldine.

At Pleasant Point I worked out that if I wasn't careful I'd end up on SH1 (and we couldn't have that) so I turned North as soon as possible and found some other back roads (all sealed though) to get me to Geraldine.

Even with these small diversions chucked in I was still a little early at the motel so after a lap of town I parked up at a cricket pitch and watched some high school cricket while making my sandwich disappear.  I'm not a huge cricket fan but it was hard case hearing the fielding team yell "catch it" every time an opposition player got his bat anywhere near the ball - there was a local Labrador present too and he looked set to join in if he got the call-up...

And so the day ended far too early with a lazy Yamaha rider sitting in his motel room with crappy sky movies on...better planning next time!