Day thirteen (a Monday, so not unlucky) was set to be a bit of an adventure.  I was riding through to Richmond to stay with my sister but the route involved taking the Rainbow Road from Hamner Springs to St Arnaud.

I was a little nervous of the Rainbow, having heard that there were "river" crossings and the odd other dodgy patch.  Prior to heading South I was able to talk to a couple of guys (one having ridden the road just a few days before I left home) about the road and they both were certain that I'd be fine.  However, I was still a little concerned - I did not want to drop what probably was around 300kg of Tenere and luggage in a creek or something and get into trouble on my lonesome.

Enter Al and his trusty DR.  With Al now based in Picton, I floated the idea of meeting up and riding the Rainbow together.  We did this all over facebook chat so there was no arm-twisting and he was pretty quick to jump at the chance.  He ended up riding down to Hamner on the Sunday (via the Molesworth of course) and camping the night there.

I actually got away earlier than planned from Rangiora and had hoped that this meant that Al and I would hit the Rainbow around 10ish.  Unfortunately, at Waikari there was a police roadblock due to a car accident on the Hurunui bridge.  This meant a huge detour back to SH1 and then some very busy (due to the accident), narrow back roads before finally getting back on the Lewis Pass road.  It cost me around at least an extra 60km and over an hour - see map at the bottom of the post.  It also meant a top up in Hamner before tackling the Rainbow.

Arriving in Hamner, I soon spotted Al's DR and the man himself sitting outside a local purveyor of lattes and we caught up to rave about the Molesworth, the weather and the ride to come.

To get to the Rainbow Road (which also takes in some of the Molesworth Station) we had to first climb up over Jollies Pass which of course I had done nearly two weeks before.  Then, at the bottom of the hill we had to turn left instead of right. 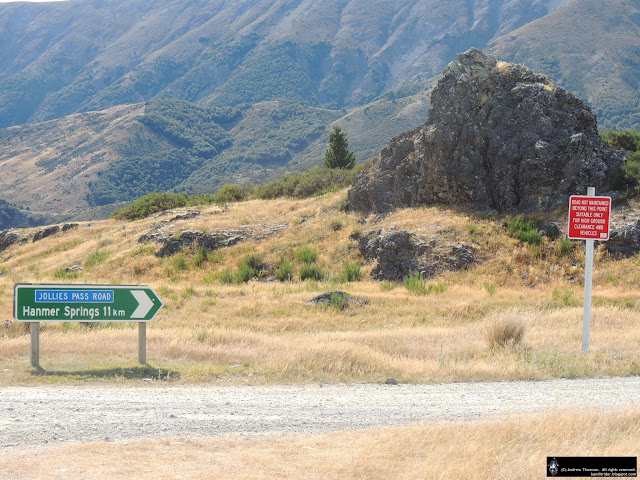 The initial part of the ride involved nice fast riding (just like the end of the Molesworth) with all the same great scenery that the Molesworth offered.  There was the odd bit of traffic on the road - people in 4WD's and the odd bike or two as well.  We did manage to find a few places to stop and nab the odd pic. 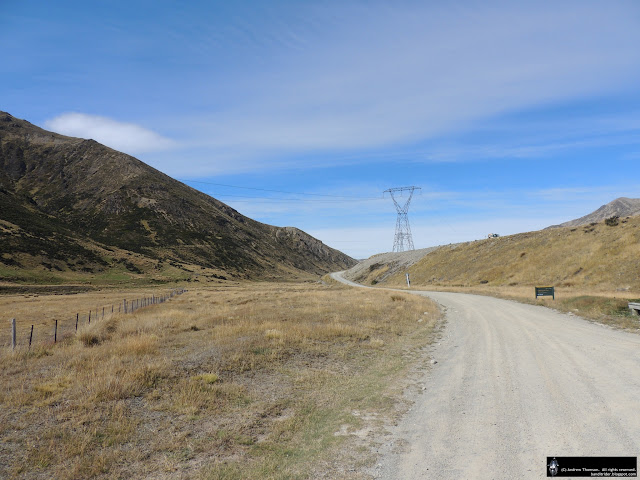 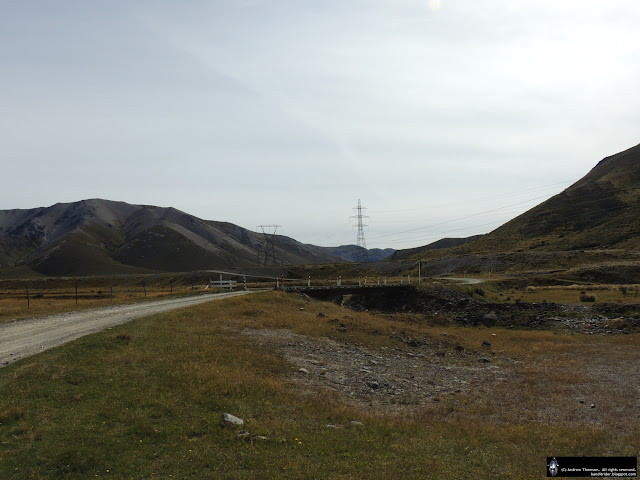 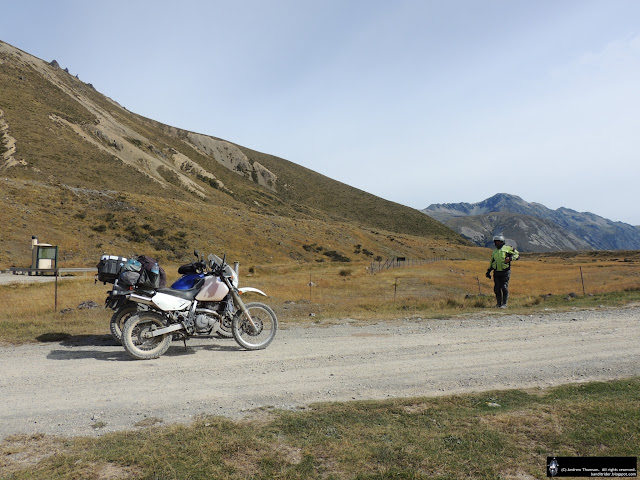 Close to half way through we came to a sign pointing to Tennyson Lake and Al suggested that it was worth a visit.  As I'd been religiously checking out the Southern lakes I agreed. 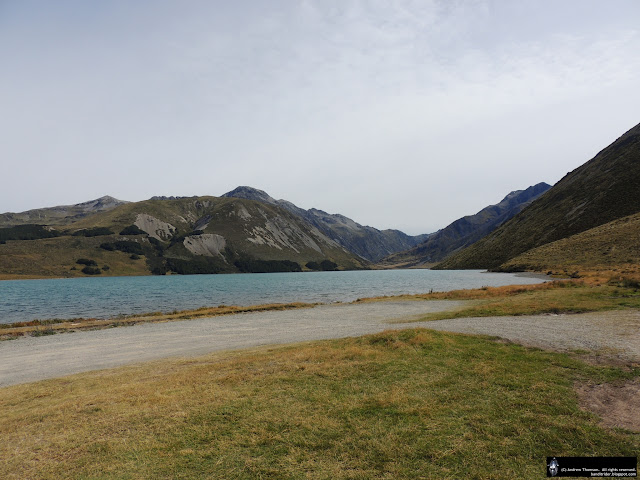 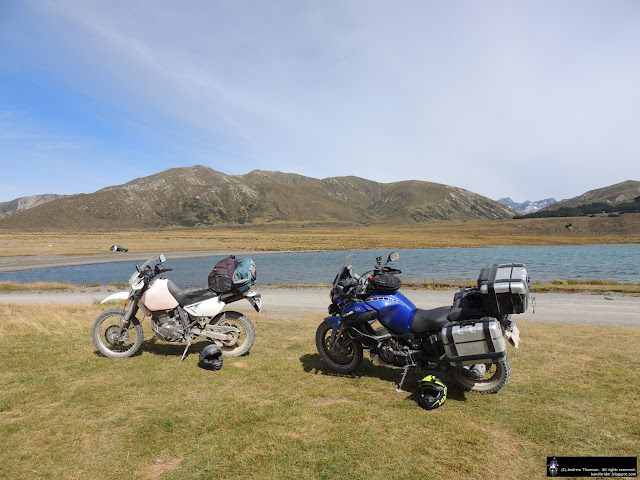 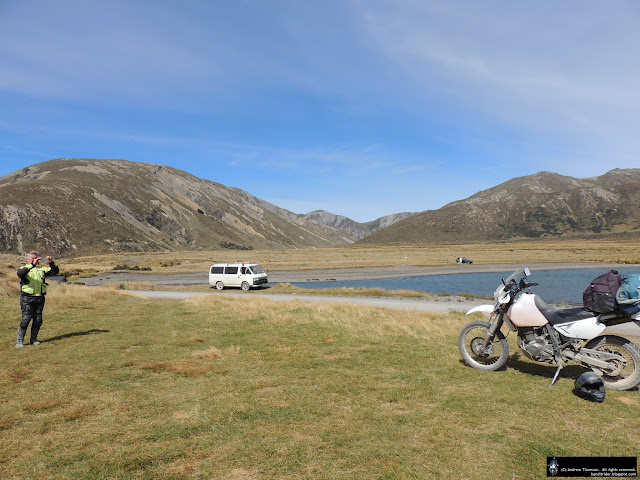 Next up we had a bit of climb up a fairly good sized hill where we thought it was a good idea to see what sort of views we could find. 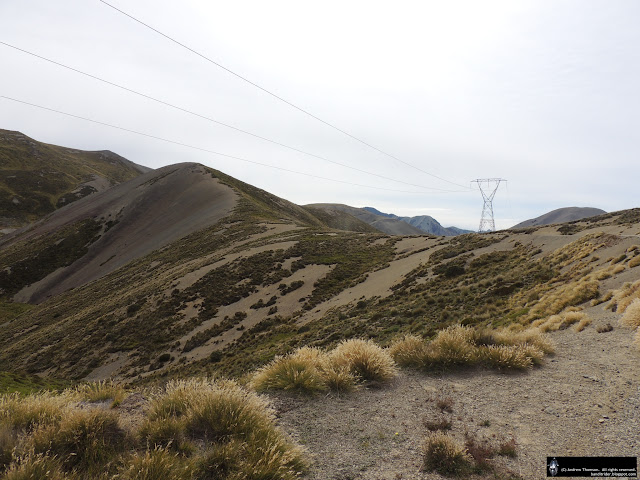 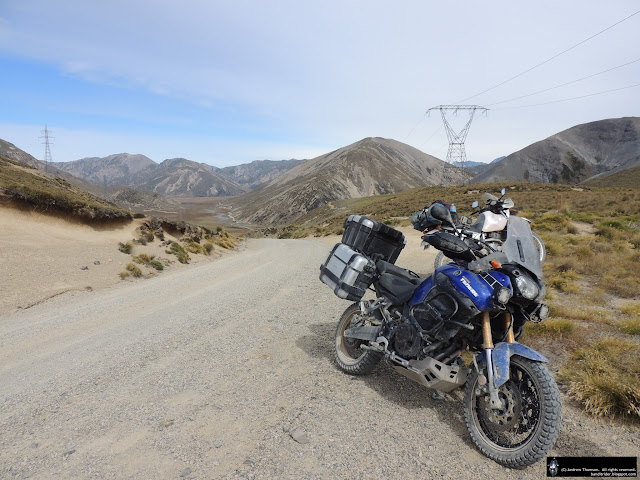 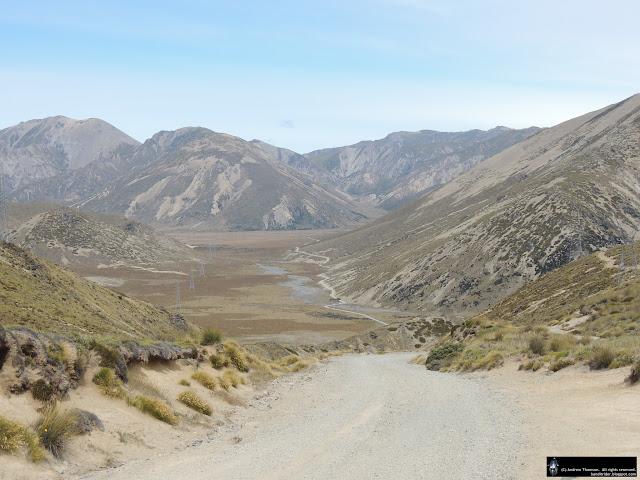 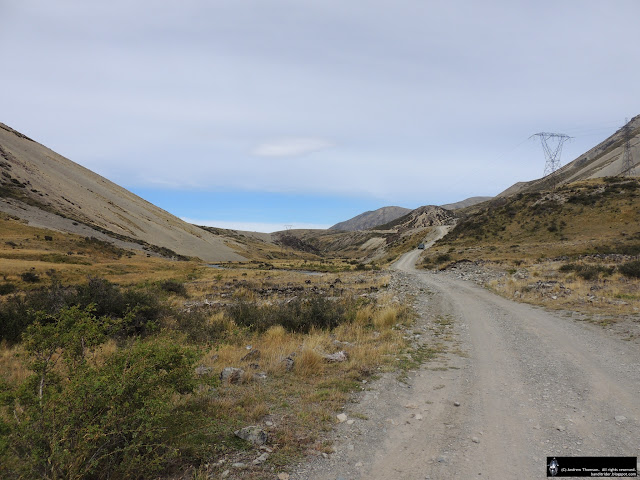 Back down the other side we started crossing the valley again and slowly started getting into more interesting with slower, rocky bits and the first of the fords.  Here's a few pics of Al showing how it's done. 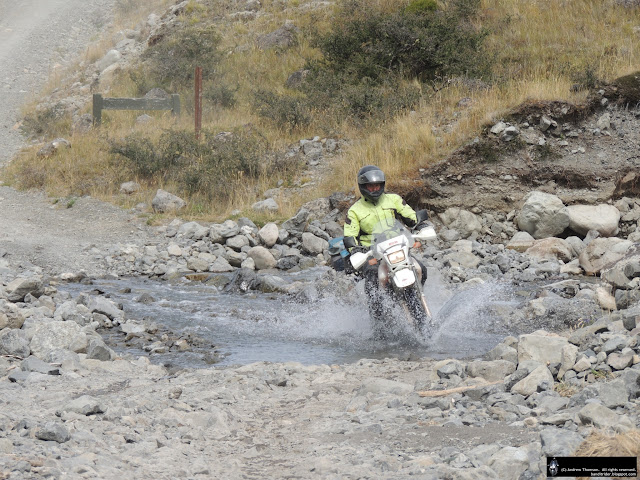 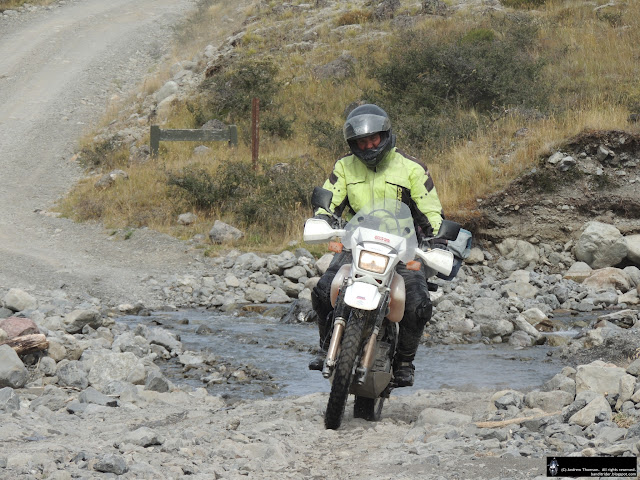 And you can see below that I made it across too! 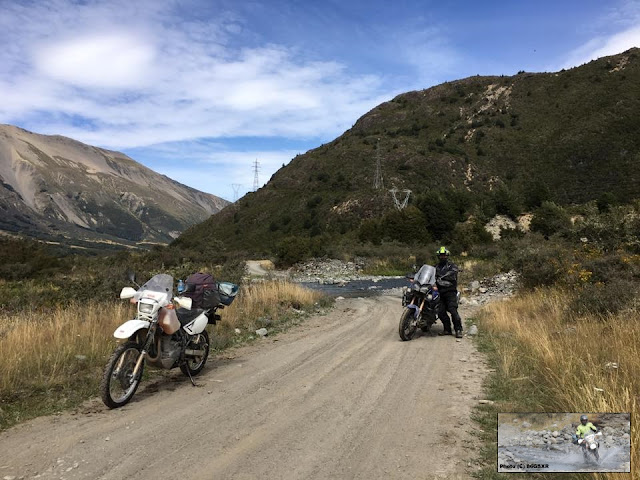 Further up the road we came to a crossing that had me worried for a bit.  It is actually concreted but there is the odd hole to watch out for and I wasn't sure how slippery the concrete was.  I took it very slowly but in the end it was a doddle. 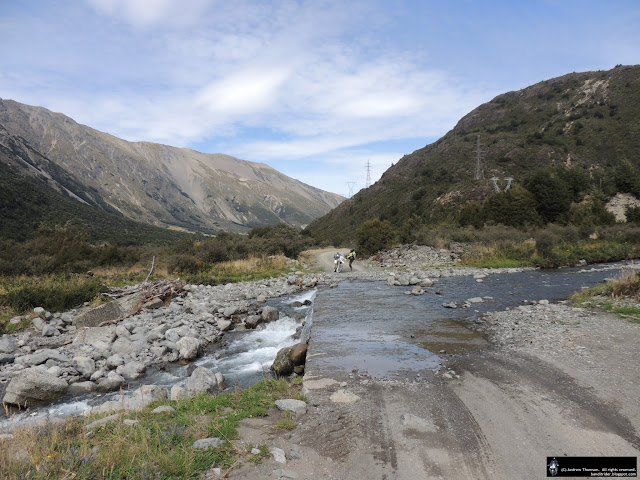 Al made it look easy again - lucky I had shown him the way eh...


From here on to the Ranger's hut, the road was more of the same except for a couple of quite slow and rough sections.  All these were dry and there was plenty of grip so they weren't too hard to pick your way through.  Along the way the views also started to change from the wide open, dry country to more bush and narrower valleys. 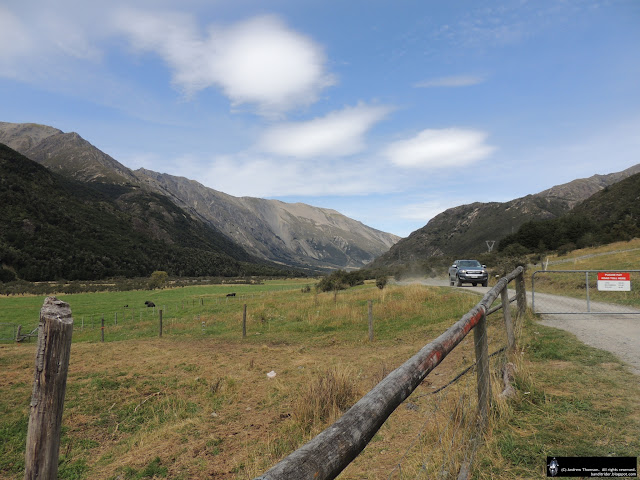 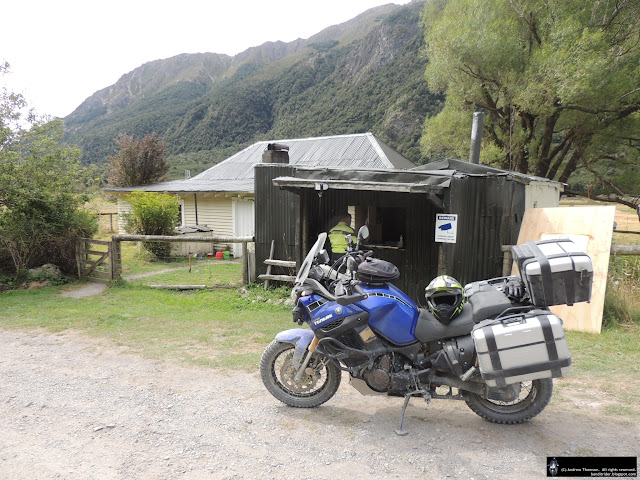 After the hut we disappeared into the bush and crossed another ford (you can see some snippets of this on the video later) before one final stop not far from the main road.  We stopped here for a bit of a chin wag and were also joined by another DR rider heading into the Rainbow. 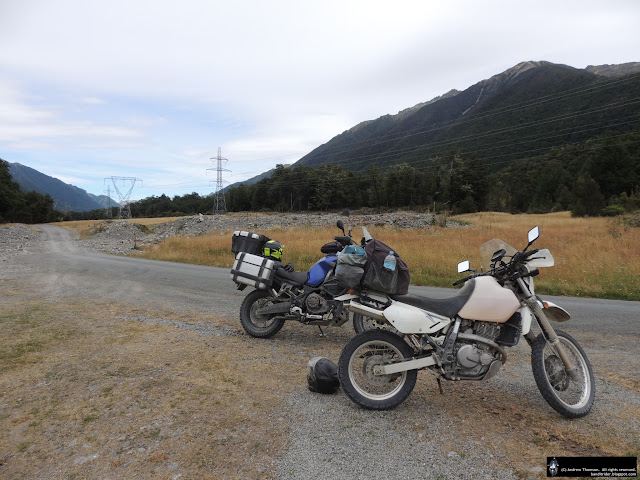 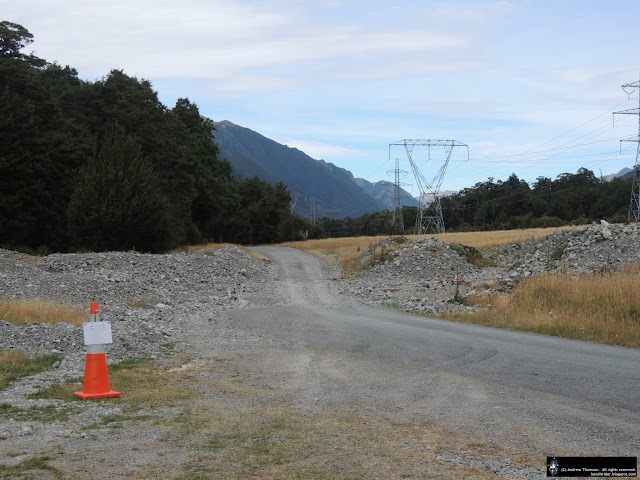 For the final stretch out to the main road we swapped bikes and it was quite cool to watch Al on the Tenere - there were about 4 easy fords to cross and she makes a bit of a splash when gunned through them!  The DR was a hoot too, coming off the Tenere it felt like a 250 (size wise) but I managed to keep the Tenere in sight...

At the main road I managed to wrestle the Tenere off Al and we said our goodbyes as he rode off into St Arnaud to pump up his tyres a bit (and a latte?) while I pointed my nose towards Richmond.

To get to Richmond I got to take in two new to me road (Ok, the Rainbow was new to me too).  Korere-Tophouse Road and Kerr Hill Roads saved me a lot of time and they were damn fine bits of tarmac to ride on a big bike if you get my drift...

I finally rocked into Richmond just before 4pm just in time for afternoon tea with my nieces - a nice way to end a fantastic day.  Cheers again Al!

Oh, and here's just a few bits and pieces of the Rainbow - very disappointed that my Session 4 decided not to work at all yet again, lucky the Hero 3 behaved itself.