With being caught out by finishing shorter days early on the previous two days and only 350km to do on Sunday, I decided not to be in too much of a hurry to leave Geraldine.  I fluffed around for a bit and looked out at a slightly drizzly looking morning as I got ready, but by the time I was organised the day had cleared and was warming up fast.  A quick fuel up and I was on the road up the Inland Scenic Route.

Even though the big long straights could be tempting, I kept the speed down and just tried to enjoy the morning and the views.  I can't have been going too slow as I did eventually reel in a Royal Enfield and pass him - Yamaha power!

My first gravel detour was up the Western side of the Rakaia River to the big station at the end of Double Hill Run Road.  And man, was this a cracker of a road!  While there was the odd rougher patch and about 5 fords to negotiate, the road was generally pretty fast.  And the views weren't that shabby either... 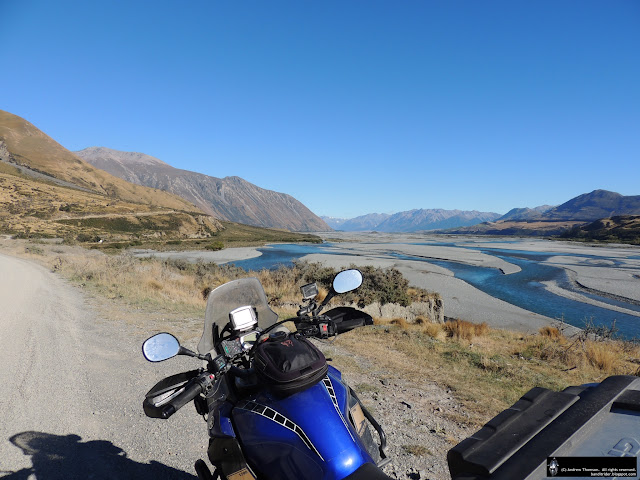 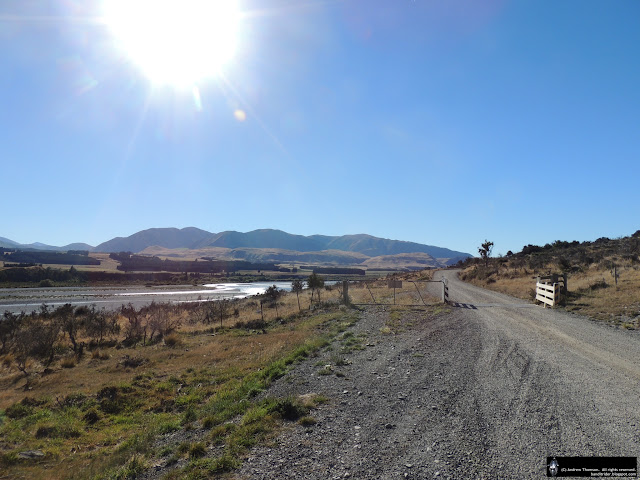 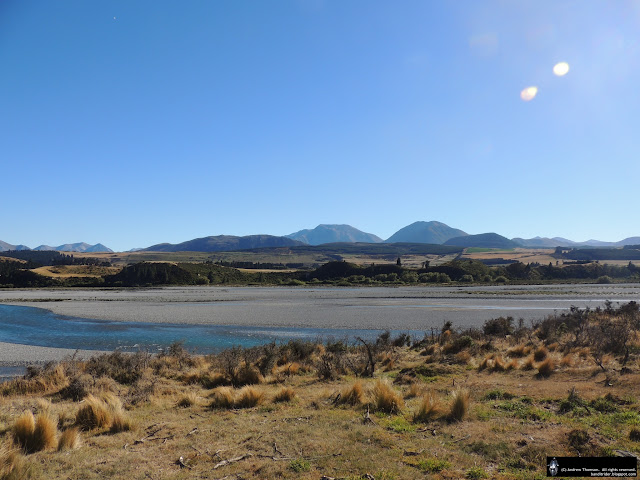 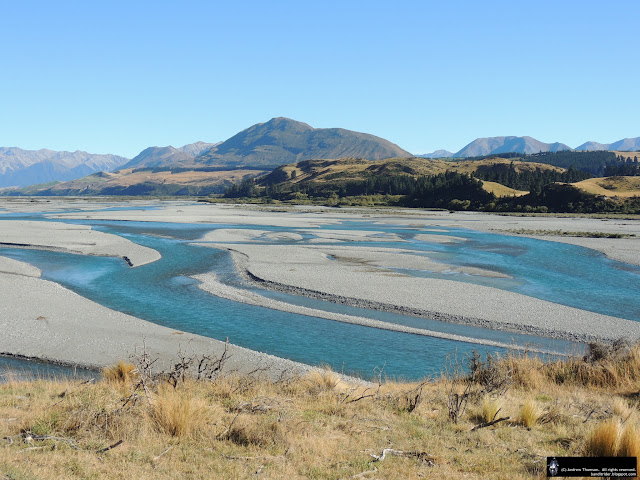 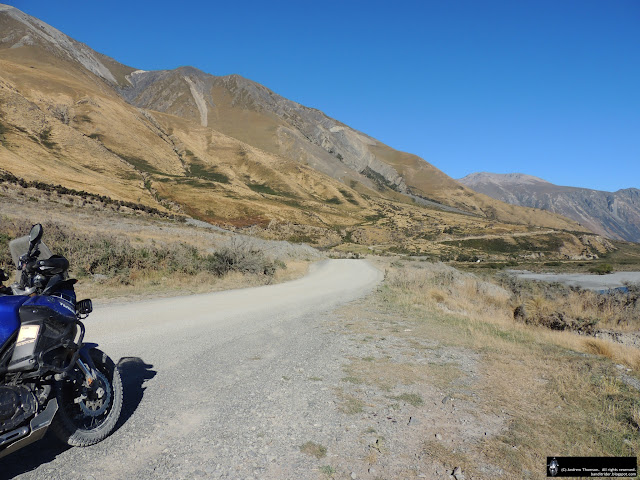 At one stage I was clipping along quite nicely when the idiot steering the bike hit a pothole fairly hard.  The poor forks took a big whack as they nearly bottomed out and the little mudguard extension hit the bash plate on the bike (twice) and was torn off - I heard it go.  Bummer!  What's worse is that the extension put a lot of stress on the guard itself and it has cracked on both sides - I may need another one, sob.

At the end of the road I had a bit of a poke around before parking up to take on some water and check out the views. 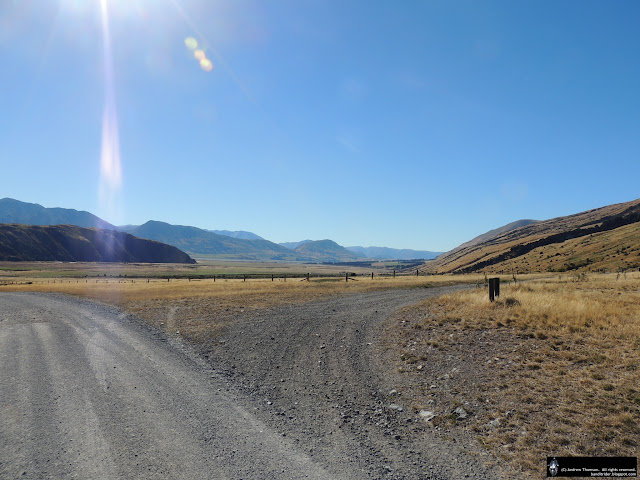 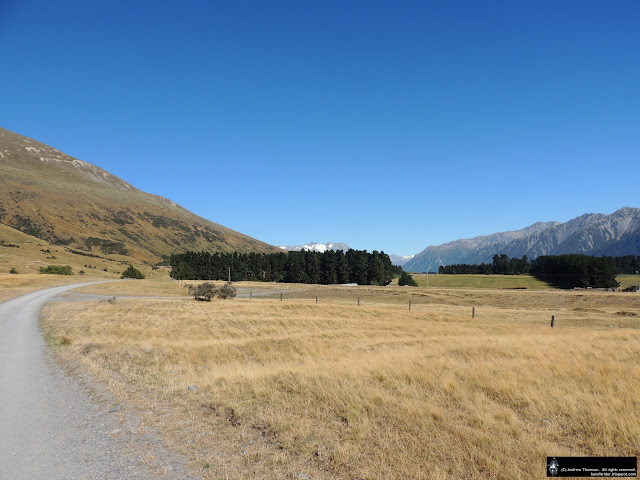 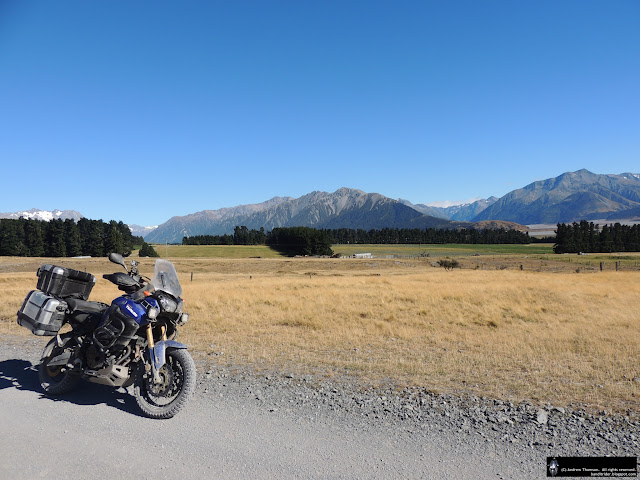 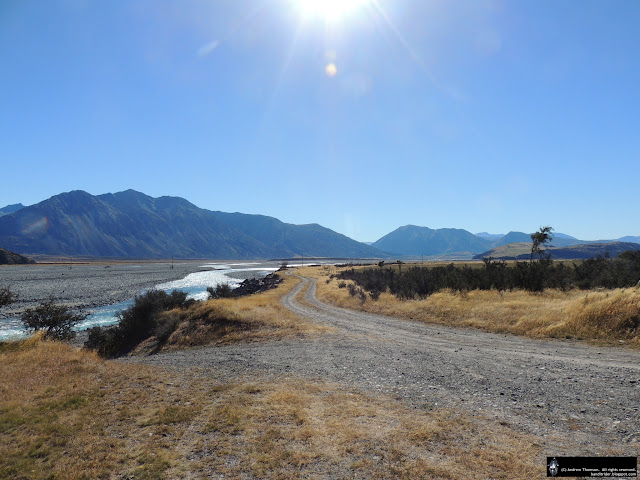 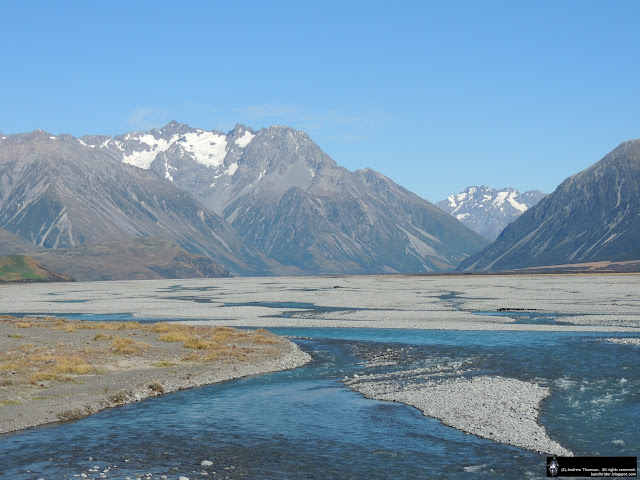 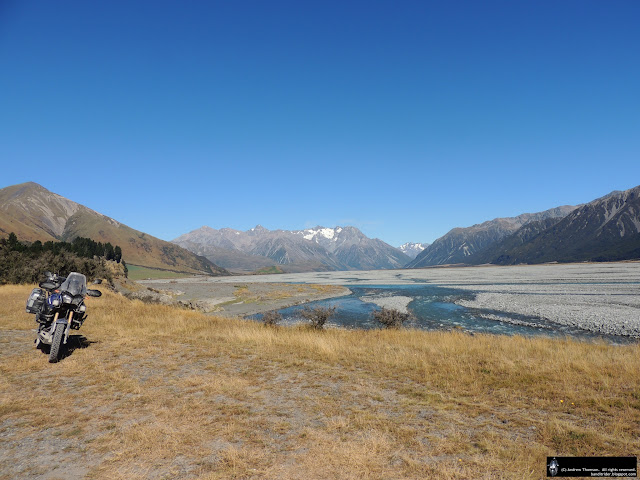 The ride out was just as much fun as the ride in although as is often the case it seemed to take less time.  One potential fly in ointment was catching up to a large stock truck on one of the faster sections but the driver as a good bloke and had looked in his mirrors so pulled over after a one lane bridge and waved me through - top man!

The video below has some highlights of the ride in.


Back on the seal again, I crossed the river and then turned off to sample Zigzag road - you'll never guess why it's called that...At the top of the hill I stopped again to check out the views across the valley. 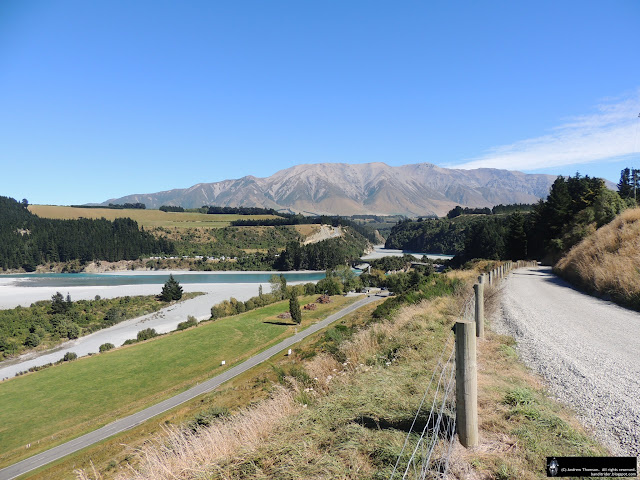 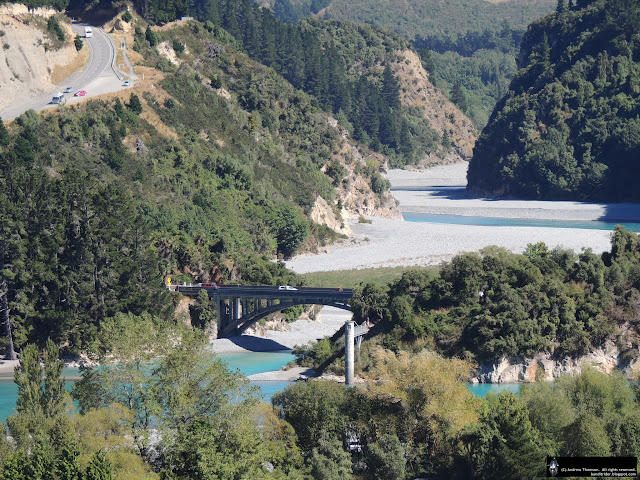 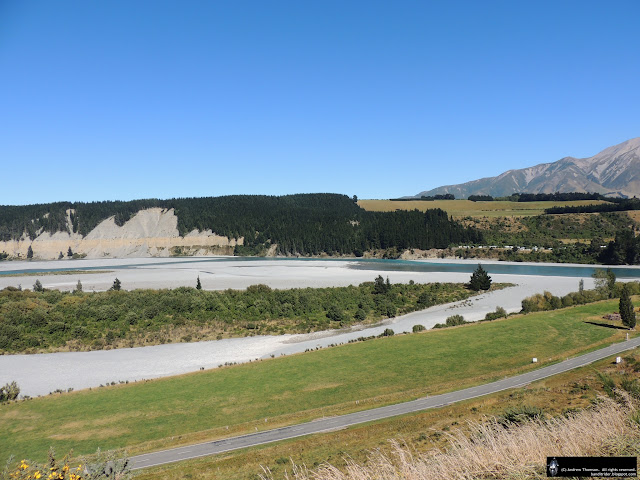 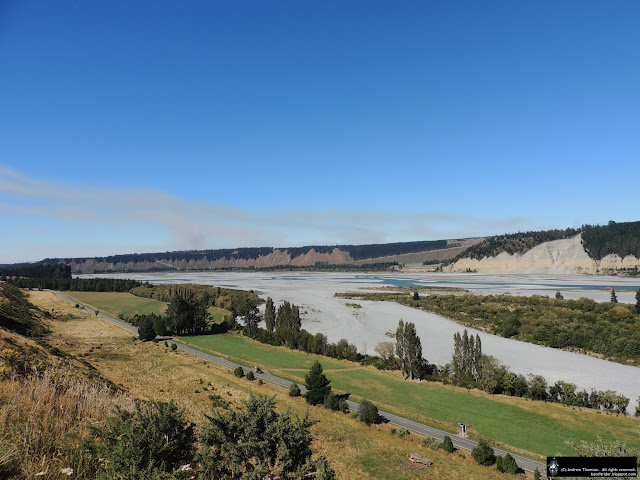 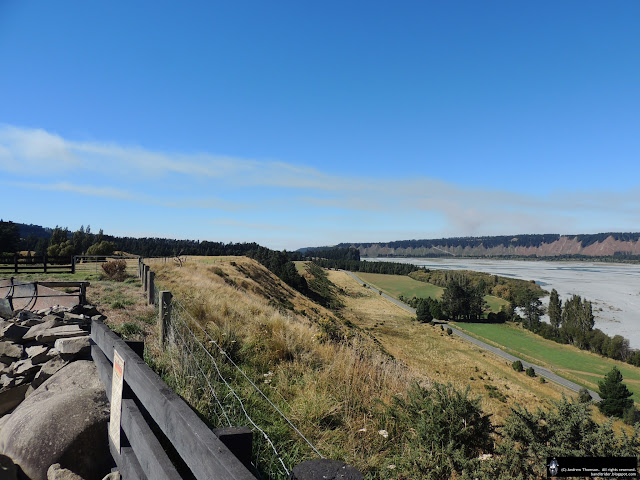 Next up was a trip up to Lake Coleridge.  The road up to the power station was all sealed but the last little bit to the lake involved some gravel and a little winding climb up a hill.  And yes, there was a lake waiting at the end of the road. 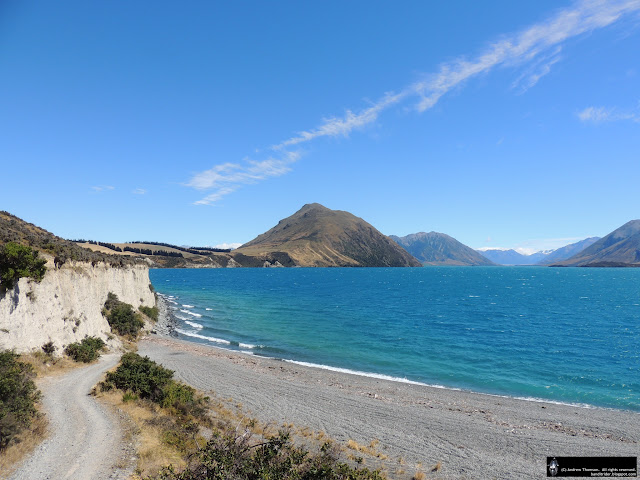 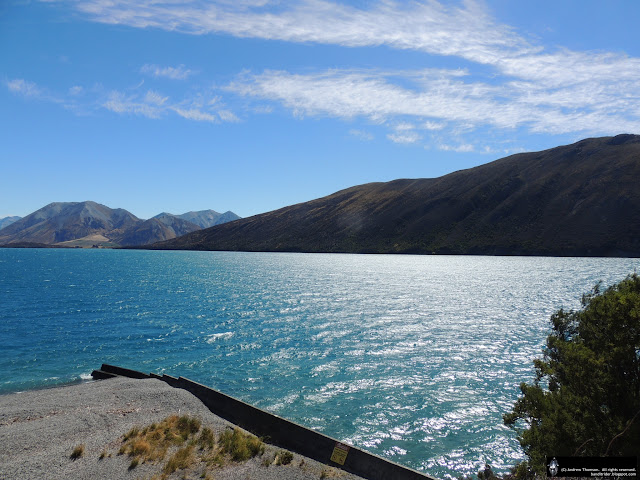 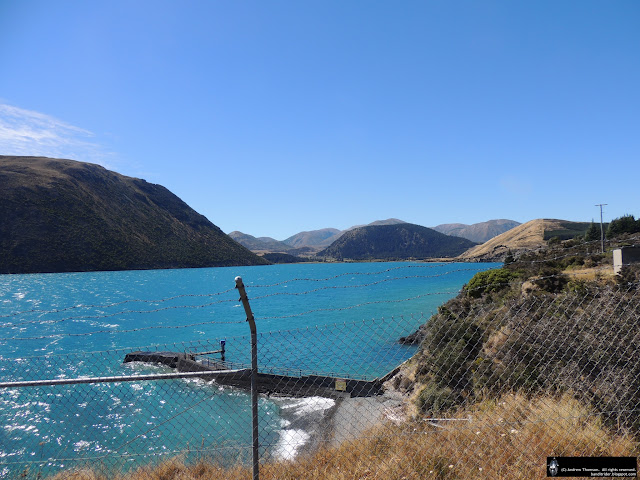 On the way back out I missed a turn (Algidus Road) that would have saved me having to go back to the power station and some of that boring old seal.  My route now was to take me over Lydon Road and onto the West Coast Road which then could take me to either Arthurs Pass or Christchurch.

Lydon Road turned out to have the odd rough patch but still was an enjoyable bit of gravel that eventually took me to, you guessed it, another lake - Lake Lyndon. 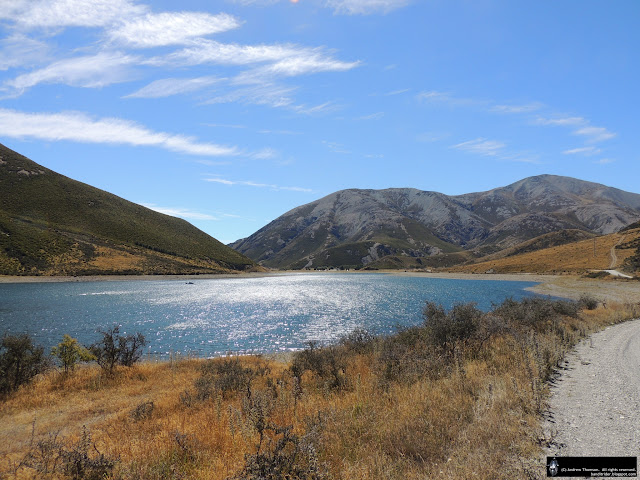 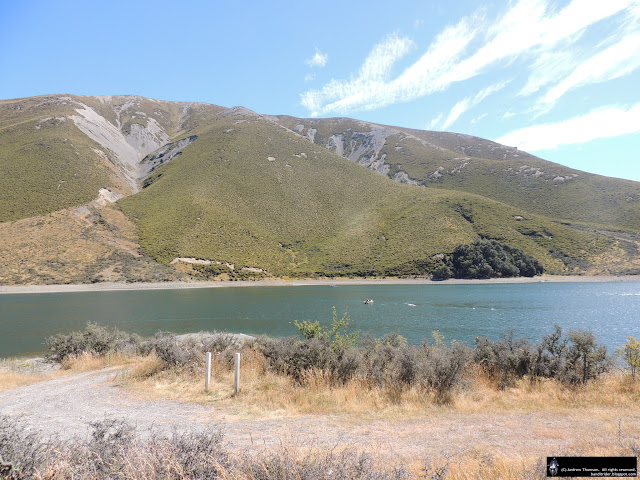 My next surprise was hitting the West Coast Road only a few k's up the road from the Lake - at the lake I'd felt like I was in the middle of nowhere but nope, pretty close to civilisation after all.  Here's a bit of Lyndon road.


The West Coast Road is a favourite so I even shot a little of one f the twistier bits.


Arriving in a hot Springfield I pulled into one of the cafes for a late lunch before starting on my convoluted route to Rangiora.

The convoluted route involved turning off SH72 and riding past another past TT checkpoint at Coopers Creek, skirting Oxford and taking more back roads (some even gravel) through Glentui and Loburn.  I even ducked down into Ashley Gorge to check it out but half of Christchurch was there so I didn't stop.

One highlight of the ride into Rangiora was catching and passing an Aston Martin DB7 Vantage.  I was flying I tell ya - must have been doing all of 95k's...

It was very hot in Rangiora (30 degrees) where I picked up some duct tape to hold the mudguard together before finding my motel and parking the Tenere in the shade of its own carport!  Fantastic day again - Double Hill Run was definitely the highlight even with the whoopsie taken into account.