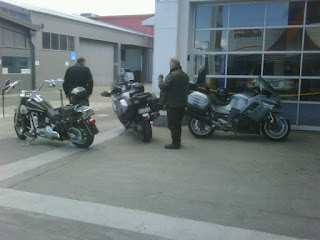 Thirteen hours on the bike and we've pretty much crossed the island twice.

We left Christchurch at around 6am and had wet roads all the way up SH1 and onto the Lewis Pass. Picked up our first photo at the Engineers Camp and the off into some light drizzle on our way to Springs Junction.

After gassing up at Murchison we had a navigational error that meant we missed the Mangles Valley checkpoint and did an extra 70km. Luckily we were going back through Murch again later so could get it then.

Riding through to St Arnard we picked up the Rainbow Station photo and carried on up the Wairau Valley to also get the Waihope pic. (You'll probably understand all this a lot better when I get back and can post a map and all the pics).

Then we were off again as far as Havelock where we had some lunch and fueled the bikes again. After crossing the Whangamoa Saddle again we picked up the Pipen Island photo and got filmed by a news crew - more on that later too.

Next stop was a Pupu Springs after tackling the mighty Takaka Hill. Photo taken we did the Hill again before stopping in Motueka for fuel and a drink (see pic). We then got to do the magnificent Motueka Valley highway before finally getting that Mangles Valley pic.

Our day ended by riding the brilliant (if wet) Buller Gorge before calling it a day in Westport. A pretty good day except for the slight navigational error...