Ok, so I was teasing the other day - time to reveal...

When I traded my K6 Bandit on the Connie (Aug '07) I hung onto the V46 topbox in the hope of being able to use it on the Connie.  For a while I didn't have an easy way to use the box but eventually in 2008 Givi came out with the SR410 kit which allowed the mounting of their boxes to a Connie and I fitted it halfway through the Mini's Return.

While the kit was very strong it was not that attractive and I had some issues where it got loose and the added vibration probably contributed to the wearing out of the pyramid clamp on the rack and the lock bolt inside the topbox.  Losing a top box was not a good experience...

So after a lot of humming and harring I ended up deciding to replace the SR410 with a custom built aluminium plate out of the States.  Probably not the cheapest way to go (probably could have got something similar laser cut in town but would have had to work with someone to design it) but the rack comes complete with the doodads that allow a Givi box to attach to it and looks damn smart!

So without further ado I give you Phil's rack: 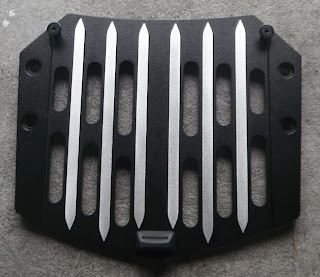 The swapping of racks took me a wee while as the Givi kit is made up of a lot of hardware, some of which is hidden from view under the sidecovers.  Then came the hard part - finding 4 bolts and locating spacers that I'd taken off 4 years ago.  I ended up finding 3 of each (a minor miracle) but luckily had another similar bolt that is working fine.  The topbox also needed a couple of strips of rubber (supplied) to help with clamping the box down firmly on the plate. 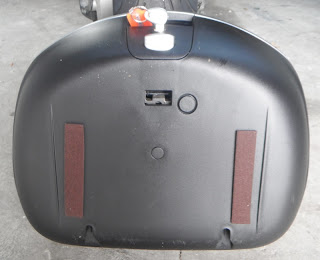 More pics of the install here.
Posted by Andrew Thomson at 8:10 pm