I had an important mission today - to go and meet my newest niece, Rosanna Marlene who was born on Tuesday last week.  Both Mum and Bub were home so off I went.

To make a change I took the V-Strom (actually I'm trying to save the Connie's tyres for the TT2000) and set off at about 9am.  It was a pretty nice day and sunglasses were the order of the day as pretty much main-roaded it until just South of Hawera where I took in a couple of back roads that take you East of Hawera through Tahwhiti before popping back out at Normanby.

From Normanby it's just 30km or so until the turn-off up to Ratapiko and the farm.  I arrived just before lunch and had a quick look at the sleeping baby before catching up with her older brothers and the rest of the family. Later on Rosanna made an appearance and here she is with her Dad and oldest brother Billy (younger bro's turn for some shut-eye). 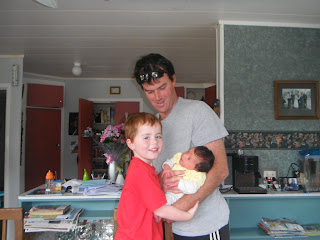 Billy has grown up a bit from when this photo was taken: 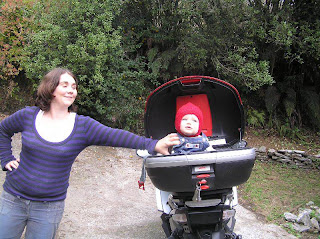 Anyway, nice to meet the newest niece and see everyone else but I eventually had turn the bike around and head home.  Another quiet pootle home boringly following exactly the same route and that was my day!
Posted by Andrew Thomson at 8:02 pm